How To – Finding Engines For Your Custom Build

So You Want More Power?

Jeremy Clarkson will be the first to agree that you can never have enough POWERRR!!! so today I thought we’d take a look at where you can find the best engines to use in your next custom build.

Now when it comes to engines and Hotwheels there are hundreds of different types to choose from but the simple fact is that the majority of these engines are either too large – being designed with the Hotrod in mind, or they are just a small lump of chrome that you really can’t do anything with.

But there are engines out there in the Hotwheels world that are perfectly suited to a modern build, especially the JDM variety. You just need to know where to look 😉

I recently created a custom for #FridayNightLikes which utilised one of these engines and the ensuing questions from you guys as to where I sourced it have prompted me to write this post. What do you think of that Jeremy? 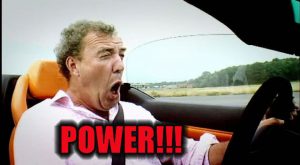 Where To Find The Best Engine

There are a few different engines you can use but there is one that stands heads and shoulders above the rest in terms of sheer awesomeness.

And that engines belongs to… the Mitsubishi Double Shotz.

This car was released not only as a mainline but also as a designer challenge series – and if you can find these then you are doing well because the engines in them are already detailed slightly. But that’s not even the best bit! If the name did not give it away then you’ll be pleased to learn that the Double Shotz comes with not one but two of these tasty engines! Now THAT is winning!

As you can see from the following images, I stocked up. 😉 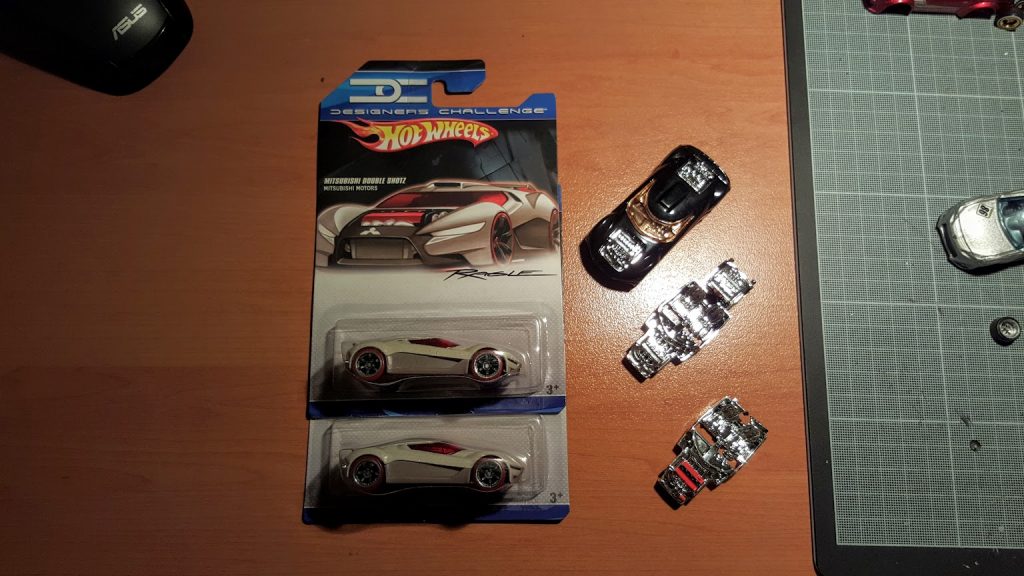 Here you can see the Designer Challenge version of the car as well as a mainline version. – Notice an engine at each end 🙂 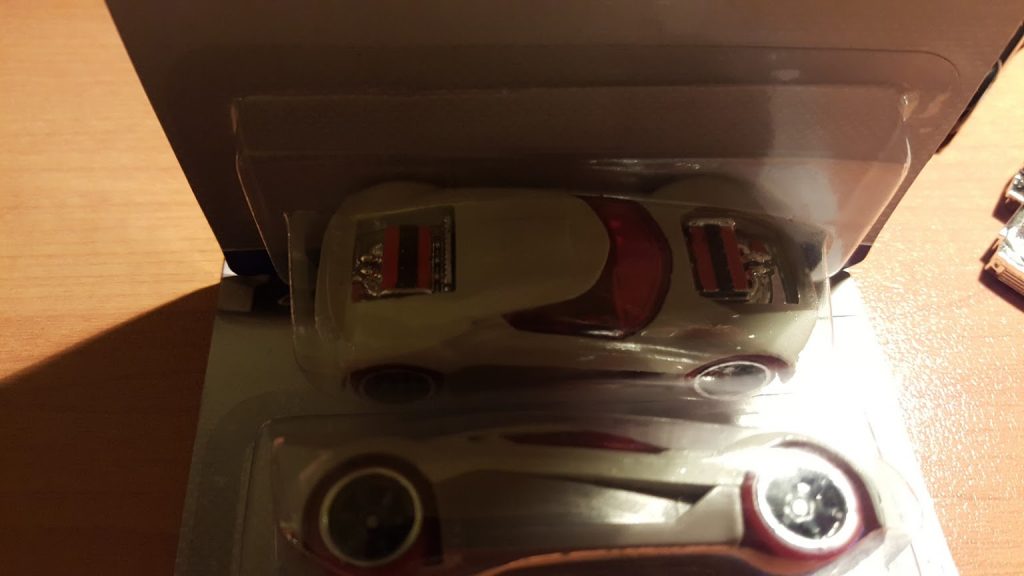 A Close up of the engines – notice the detailing 🙂 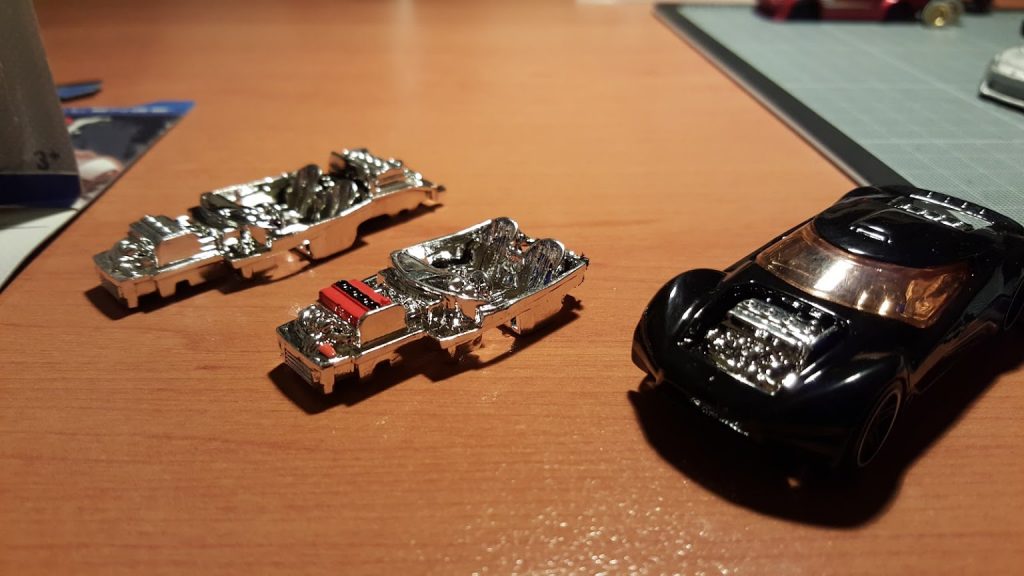 If you use a mainline version then obviously you are going to have to paint and detail the rocket cover and pod/airfilter but even the designer challenge version needs a little attention.

All the pipes running from the engine block are chrome – which is awesome, but the base and plastic holding the pipes in place are also chrome, meaning when you look at it you cannot tell your arse from your elbow and you kinda lose all the detail. What I recommend you do is use black paint and a super fine brush to paint the base and in between all the pipework.

Here is one I prepared earlier: 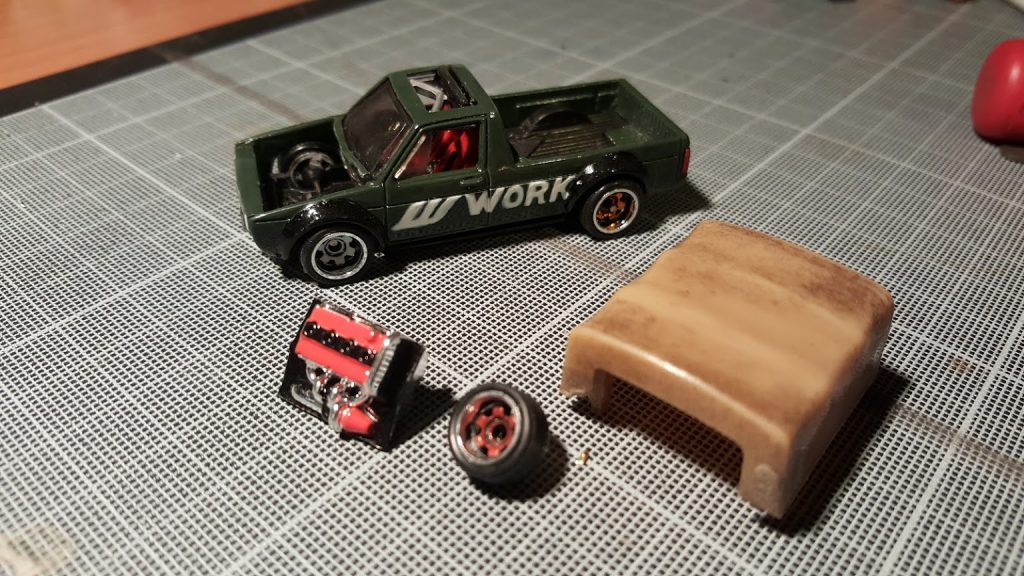 Here the engine has been cut out and the base and surrounds painted black. As you can see it has highlighted the pipework and brought the engine to life

A couple of pics of the finished product – and more reasons why this engine is so good to use on your next custom project! 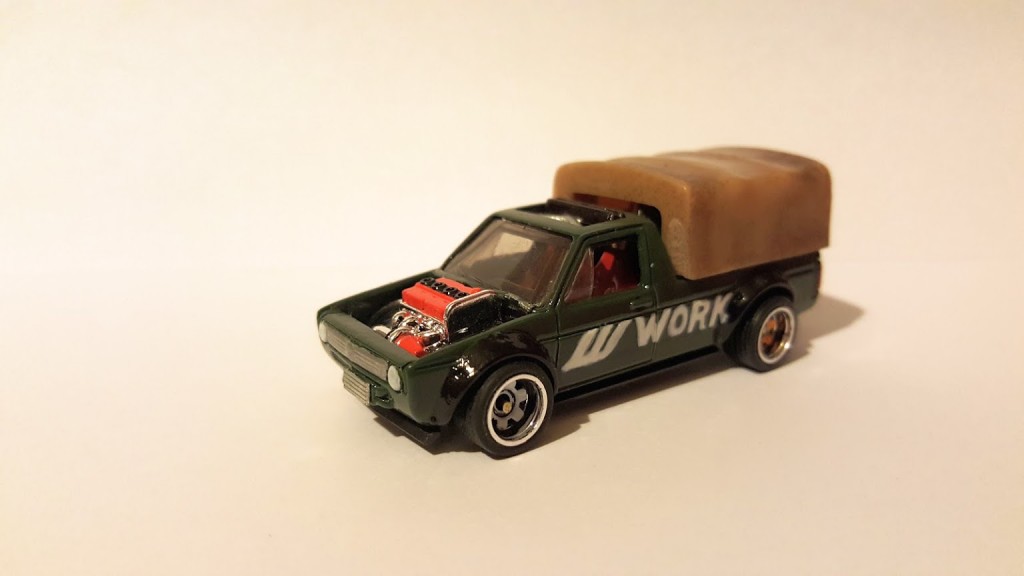 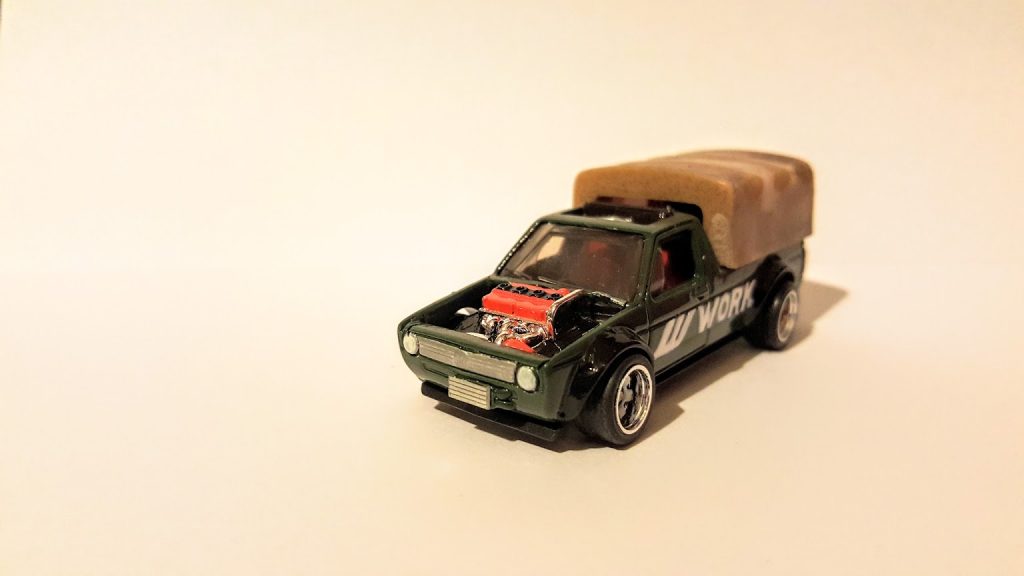 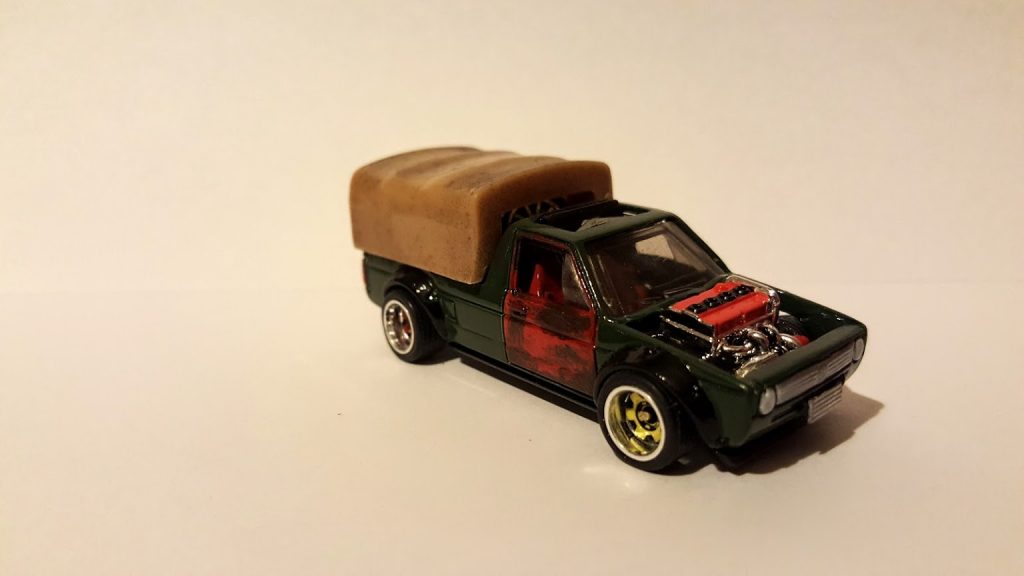 After the Mitsubishi Double Shotz the other engines in the lineup seem pretty lame in comparison, but in the interest of a good story let’s take a look at some of the other engine options for your next custom diecast car.

Bordering on hotrod style and clearly not the sort of engine you would see on a modern JDM or Euro performance car, the Mad Fast engine offers excellent details in an engine small enough to fit into the hood of almost all vehicles. Available in Silver and Gold – I would recommend the gold, it is a common car and can be found through most Instagram, Facebook and even eBay sellers for a couple of bucks. 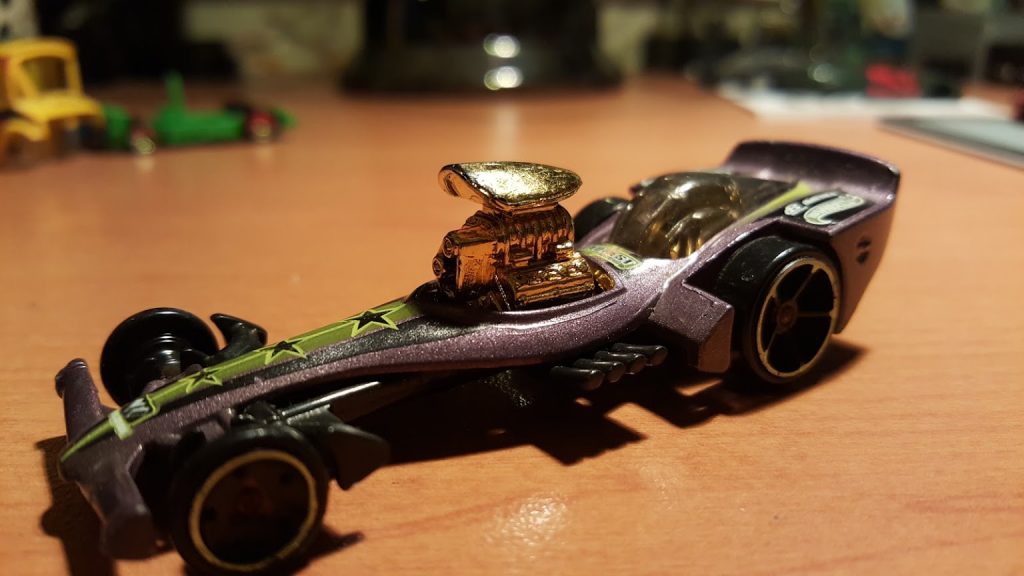 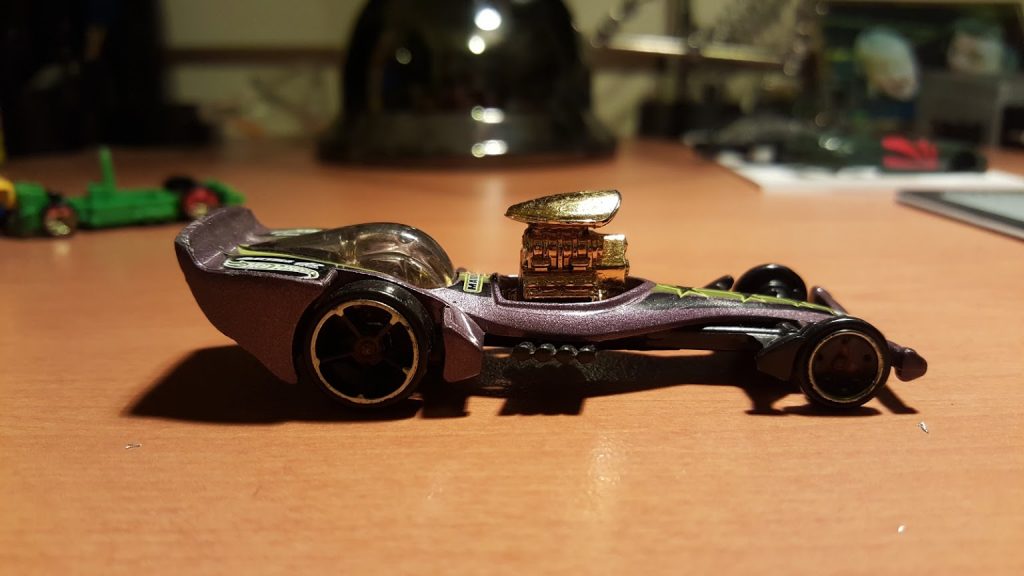 I surprised myself when I realised the Honda Racer actually had a pretty nice engine block sitting on the top. The problem in this case is that the block is excessively large and would not fit into the hood of most hotwheels cars. It can however fit onto the tray of a caddy perfectly. Rear engined euro trash anyone? LOL. The engine is black on the model and with a little primer and some detailing could come up looking a treat! 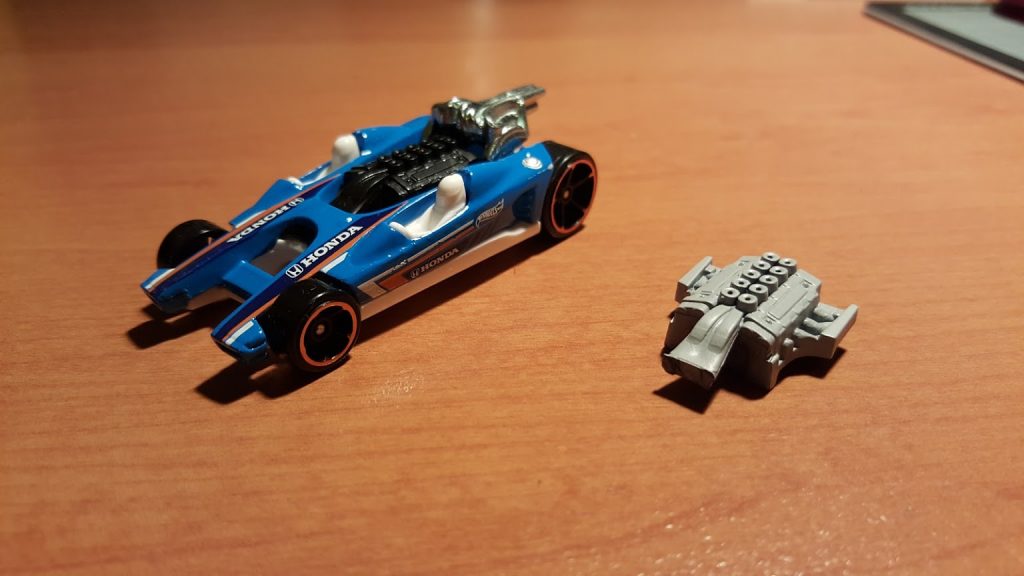 I learned this from a fellow Instagrammer (forgotten his name – will edit post and credit the fellow when I remember) and was quite surprised to learn that there is indeed an engine inside the breadbox.
Sidenote – I love the shape of the breadbox. Have customised a few and think it has a nice stance to it.

This engine is not as well detailed as many but I can still see that it has potential because of its size and the details that are there. Paint the pipes and the rocket cover and I reckon she’d come up sweet as. 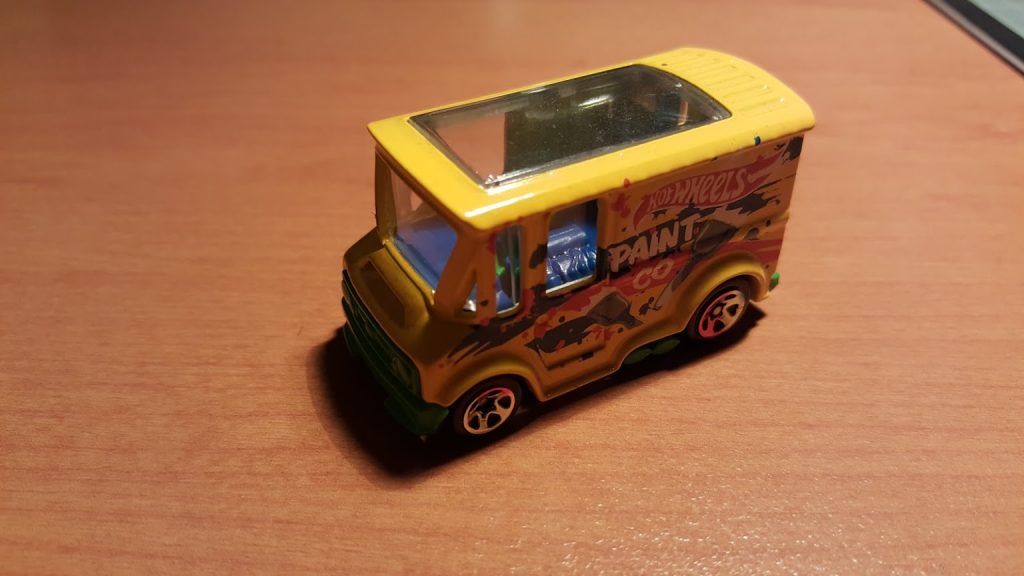 Peek-a-Boo I see you 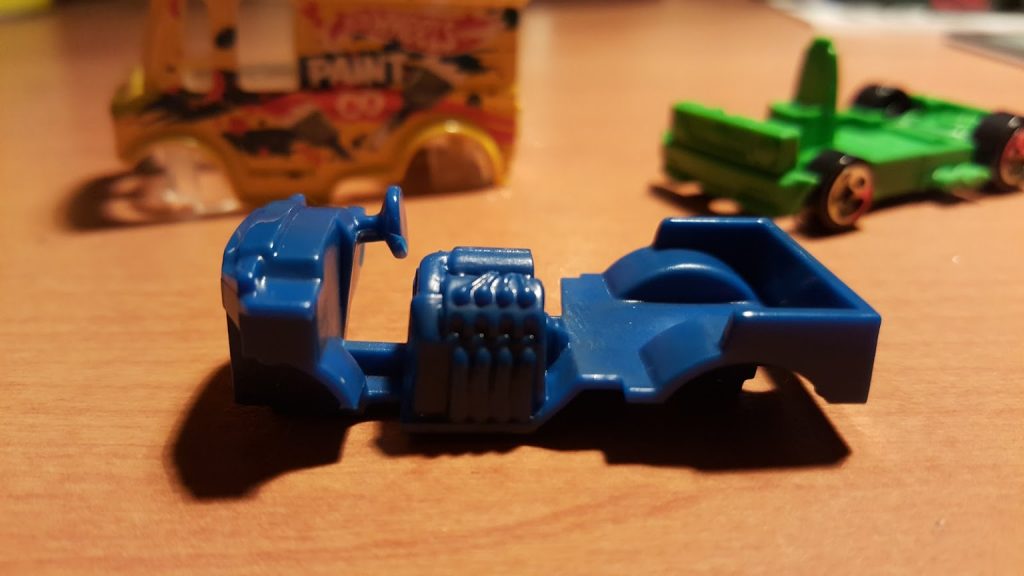 And Something a Little Different – An M2 Diecast Car

I recently found these M2 models at the Reject Shop and although they were $10 each I could not resist them due to the detailed engine that was poking out.
There are plenty of other brands who’s engines (and parts) lend themselves well to your Hotwheels custom, but I wanted to share this one specifically because like most of the engines in this list, it will fit inside (or on) the hood of every 1:64 scale diecast car there is and would be that cherry on top of an already sweet build. 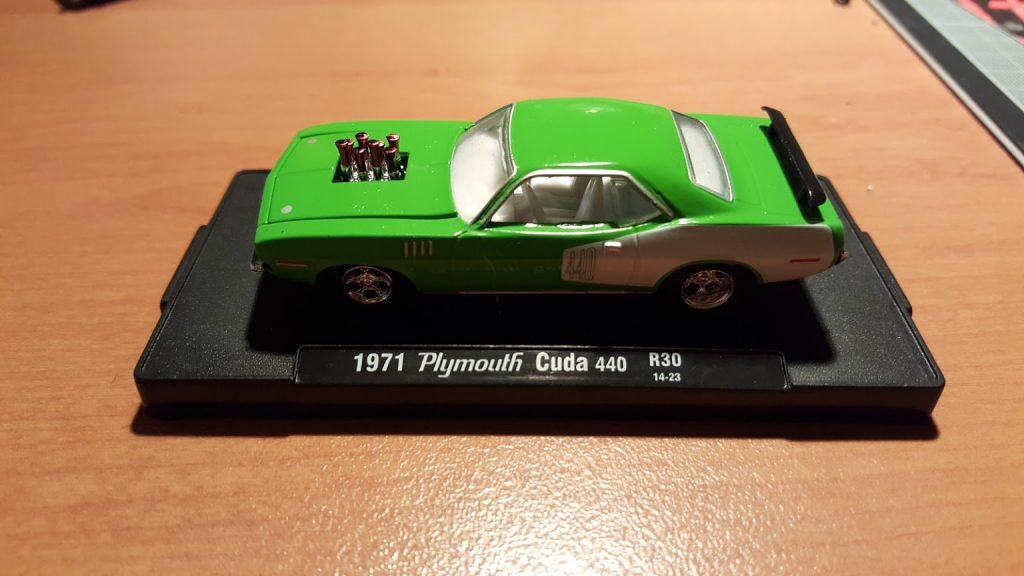 This engine came in a few different M2 diecast models 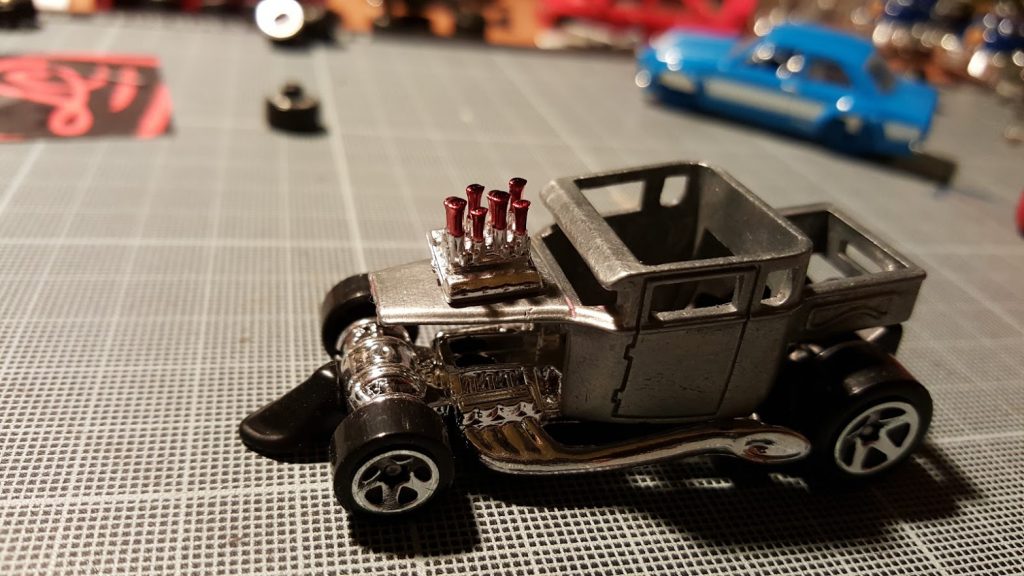 Granted this isn’t JDM – but how good is this going to look when finished!

Gentlemen (and Women) Start Your Engines!

OK now you know where to look I suggest you start hunting. And remember to keep those custom eyes open when you’re at the toyshop – because not only have you got hundreds of Hotwheels mainlines to steal parts from, there is also a lot of other brands that make parts that would fit – and fit well.
Why only yesterday I found a set of Enkei style wheels from a Disney Cars release that fit beautifully onto a Toyota 86/Scion FRS – but more on that another day.

Remember as always to share this post if you thought it was awesome – even slightly awesome is alright by me 😉 – and if you haven’t already subscribed then make sure you do, because I have some pretty exciting stuff planned. Stay tuned…