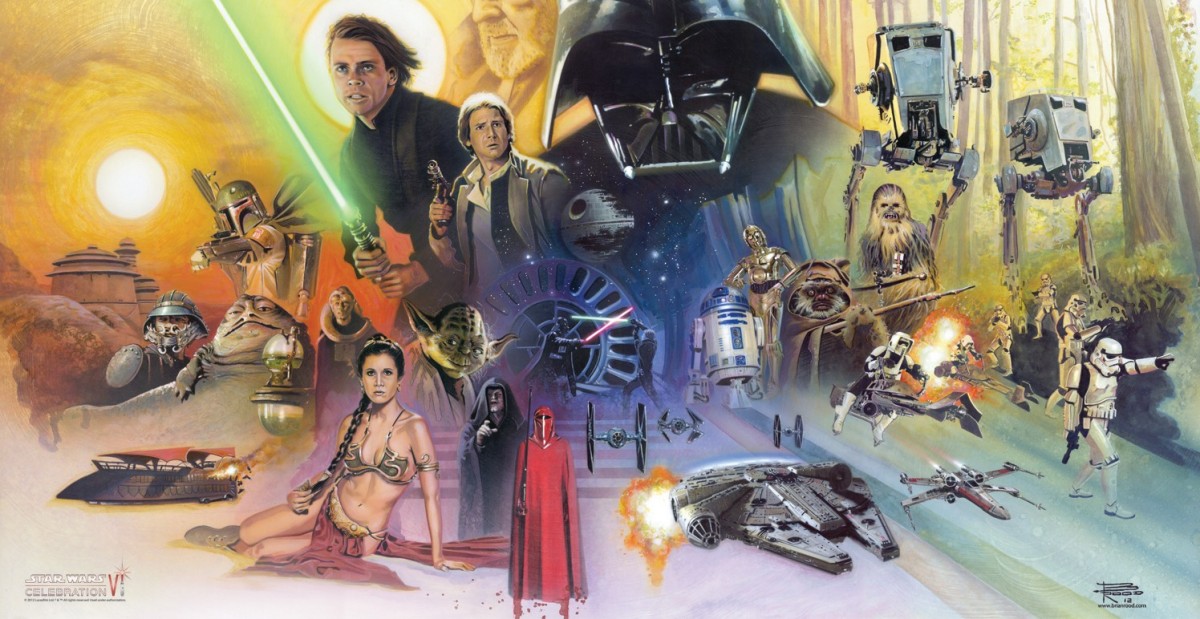 Hotwheels Got It Wrong.

Hotwheels and Mattel do an awesome job of draining all my money and feeding my obsession but when it came to the Star Wars release there were a few cars there that were well, shite.
C3PO came out as a drag bus and although this sounds good on paper, the bus they ended up designing had a rear end so open and full of extra bits and pieces it kind of ruined the lines that make their standard drag buses so insanely good looking.

So I went about doing something to remedy this. LOL OK not really but I did come up with a wicked idea that just also happens to be a great alternative to the version Mattel gave us. But before we get to that let's take a look at how it all came together...

I had already cut the front off and it was just sitting there and about 4 inches away sat a Kool Kombi that was yet another work in progress/going nowhere in a hurry project. I thought to myself 'holy shitballs this would look awesome'... 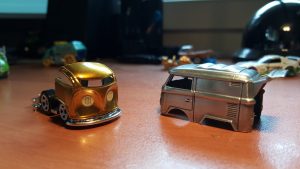 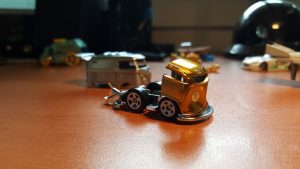 And it totally does (look awesome I mean)!

I had used my Dremel to cut the head off of C3PO - with my focus being on the back half of the dragbus (as mentioned I have another build I'll reveal soon) so the head ended up being cut at a bad angle and was also too long to fit the Kool Kombi base.

I wanted to cut the Kool Kombi from the front of the moonroof cover as this gave me a natural line to use and would guarantee accuracy but the head of C3PO needed to be cut back and straightened.
For this and for the cutting of the Kool Kombi I used my Jewellers saw and highly recommend  you purchase one if you have not already! A dremel is like a bull in a china shop most times and is really not equipped to handle the more intricate cutting jobs. 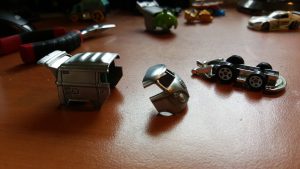 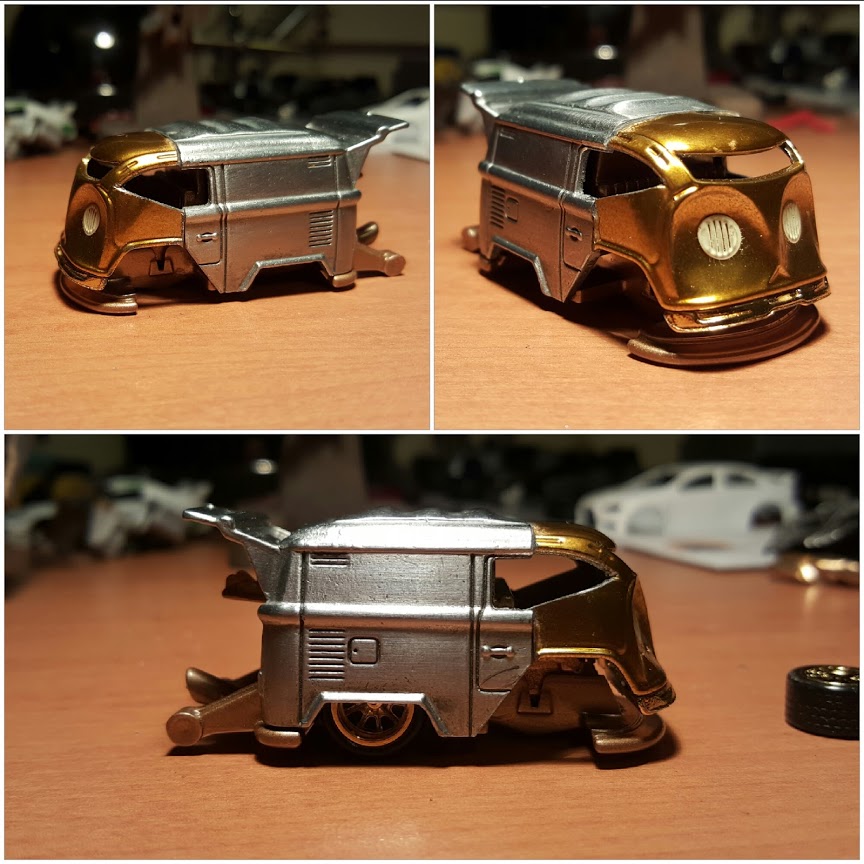 This is definitely coming together better than I had expected, but now it was time for the details and the more crucial issue of trying to match the paint. I honestly didn't think I would get it as close as I did but the choice of using a metallic gold spray paint (Dulux metallics) turned out to the be the right one 🙂

I polished the diecast to a high sheen before applying the metallic paint. This is the only way to get that metallic/glossy/spectraflame effect. Turned out ace! 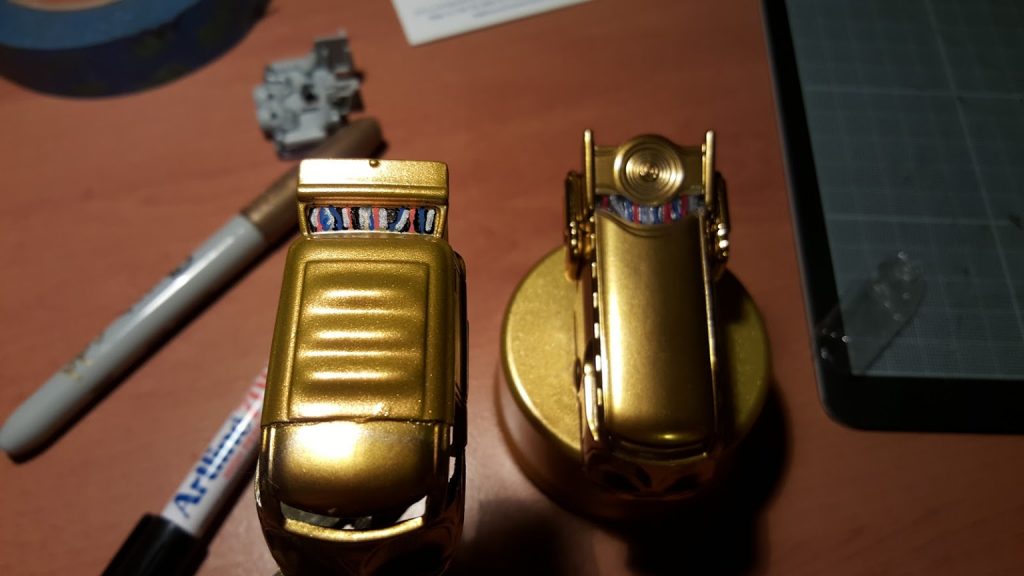 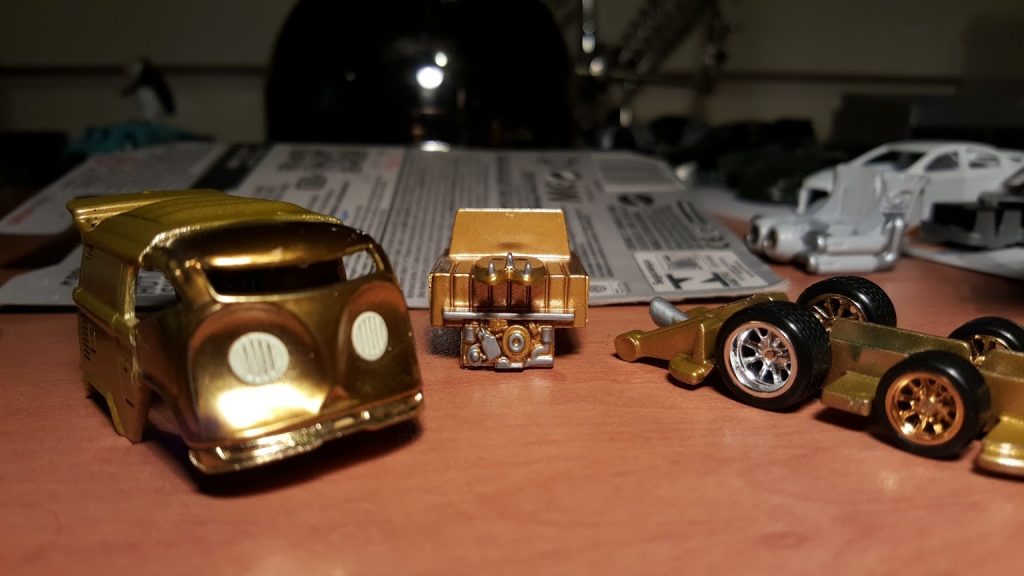 Put it All Together and...

Yep, I finally came up with a name for myself and my customs. All my customising brothers and sisters have cool sounding custom names and mine is kinda non existent, or if anything it is My Custom Hotwheels - which is great for a website name but a tad ambiguous for personal branding purposes.

So Where's Whalley Customs is now my official Customising name and as soon as I get my shit together I'll design a logo and all that snazzy stuff too. Look out! :p

Anyway, enough about me - who cares right?! let's see the Kombi already! 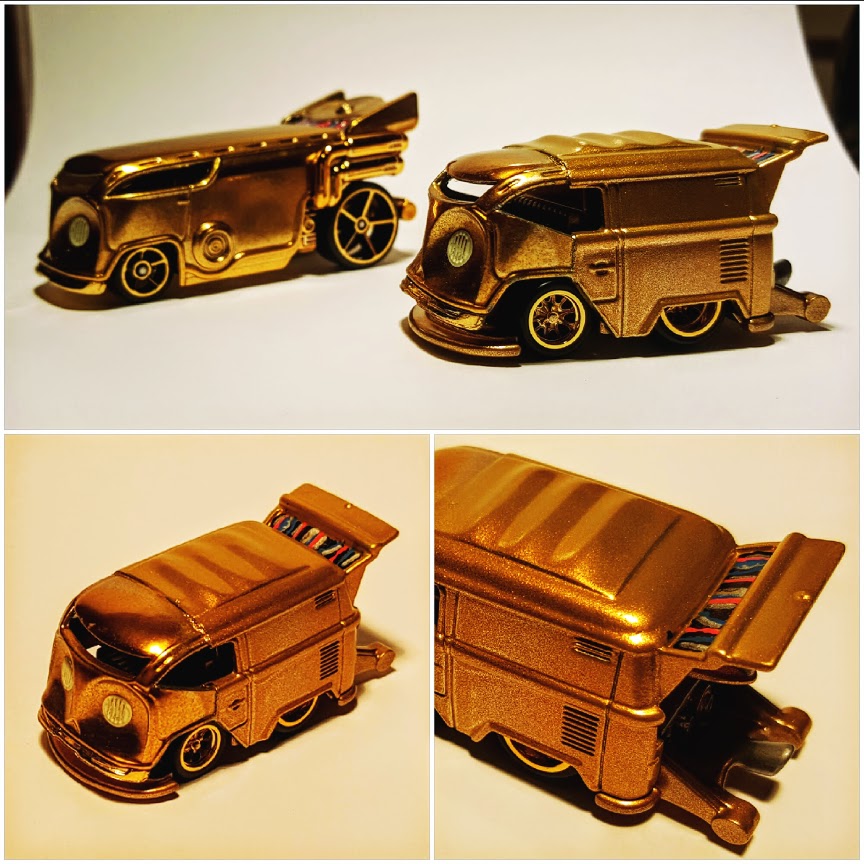 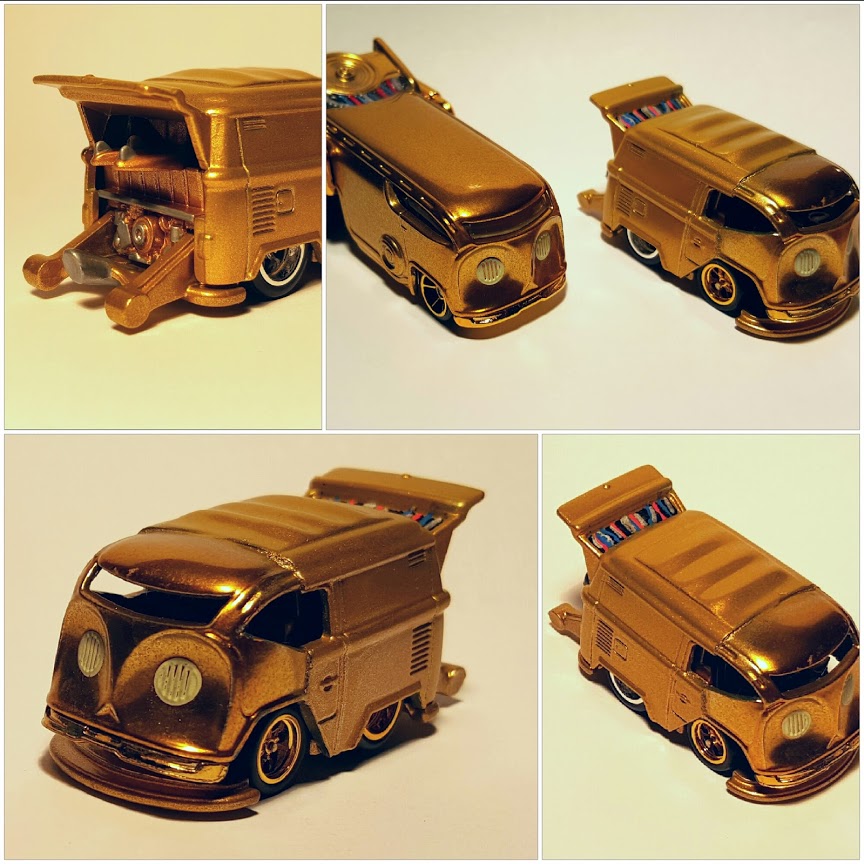 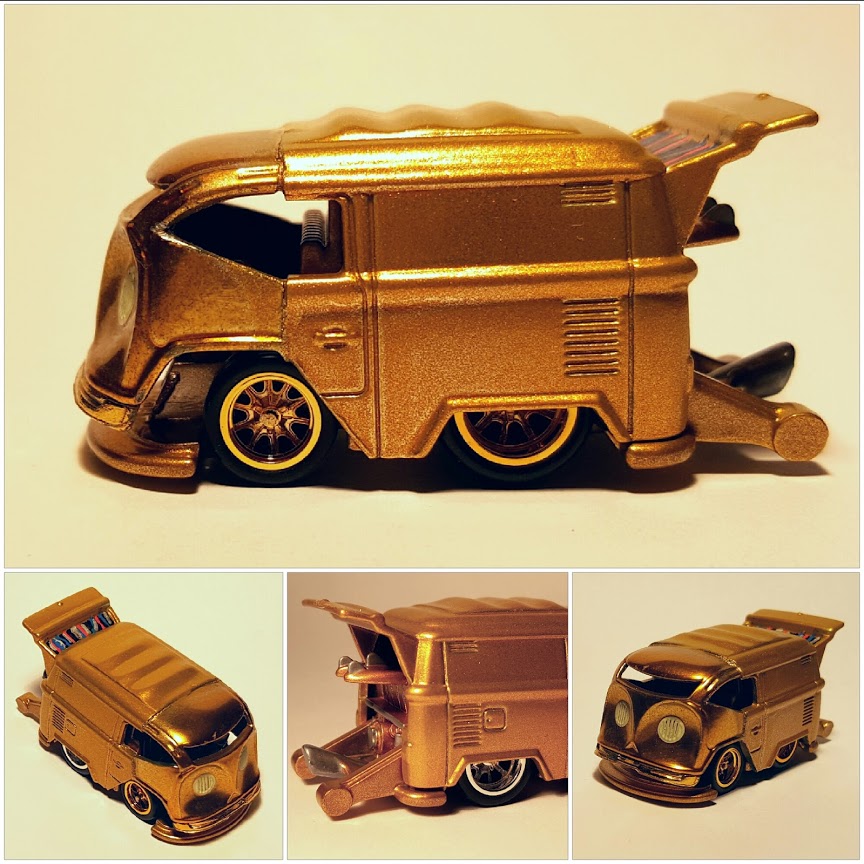 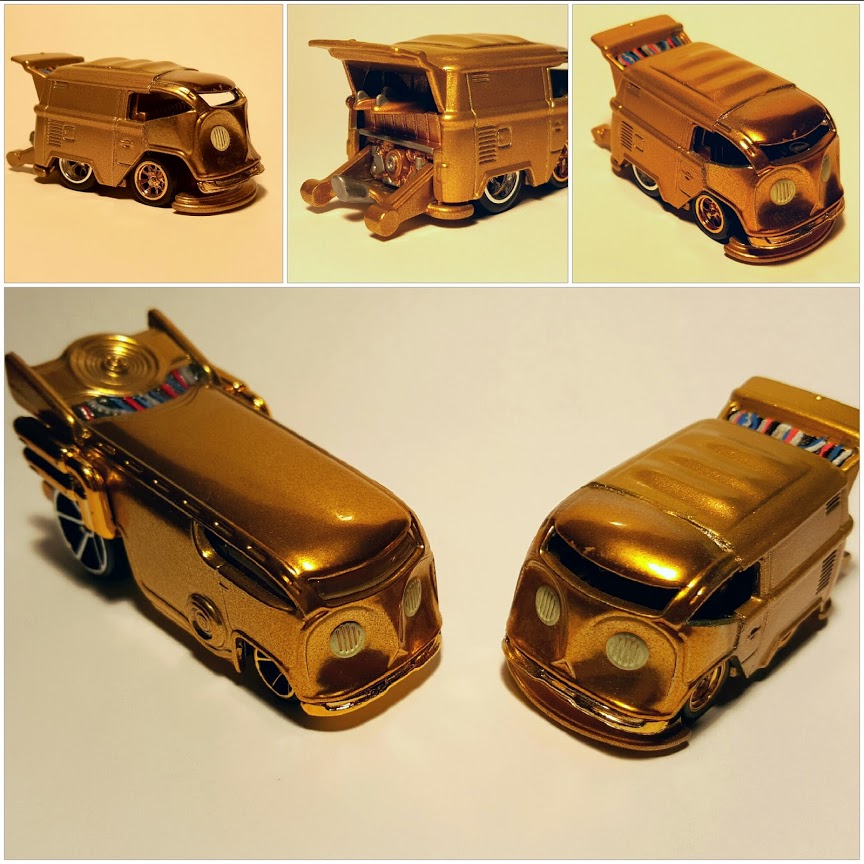 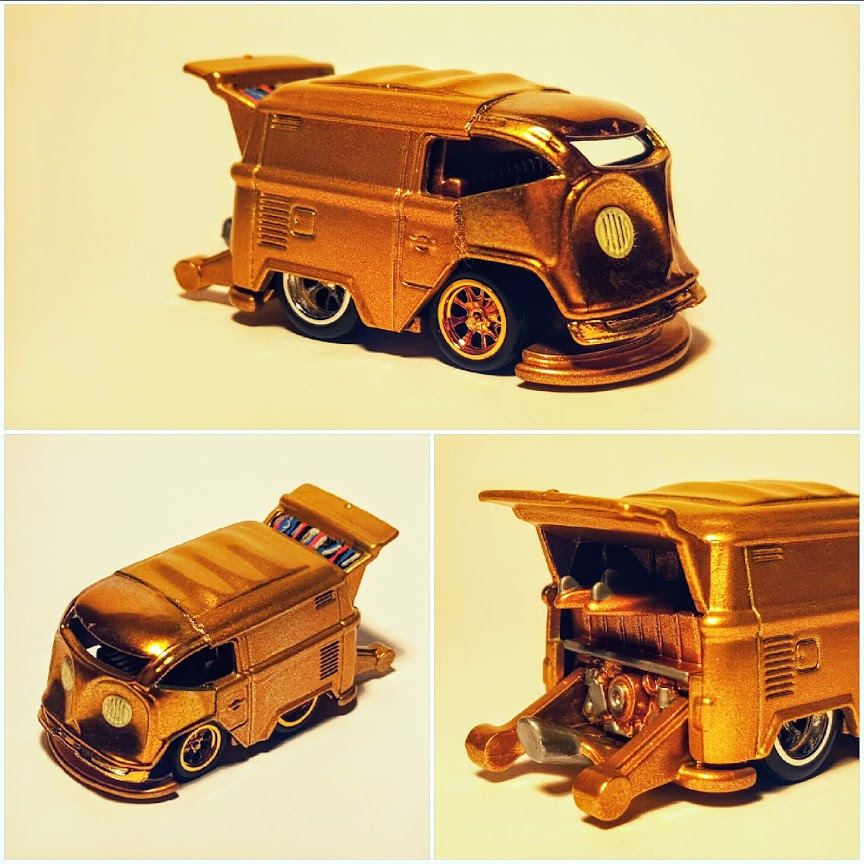 Here is the C3PO Star wars drag bus in all it's glory - looking pretty lame next to it's Customised cousin I must say ... but then I would say that.

Taking My Customs To The Next Level

It's time I joined my colleagues and jumped on the 'make your own custom cards' bandwagon.

This custom C3PO turned out so nice (in my opinion) that I decided it needed it's own custom card to display it in. (on?)
To remove the original Kool Kombi I used this method here and as a result had a perfectly clean blister ready to mount to the new custom card.

Here is the design and the finished product: 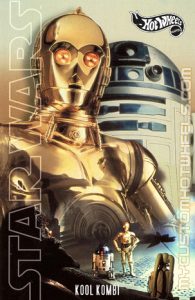 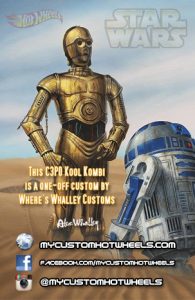 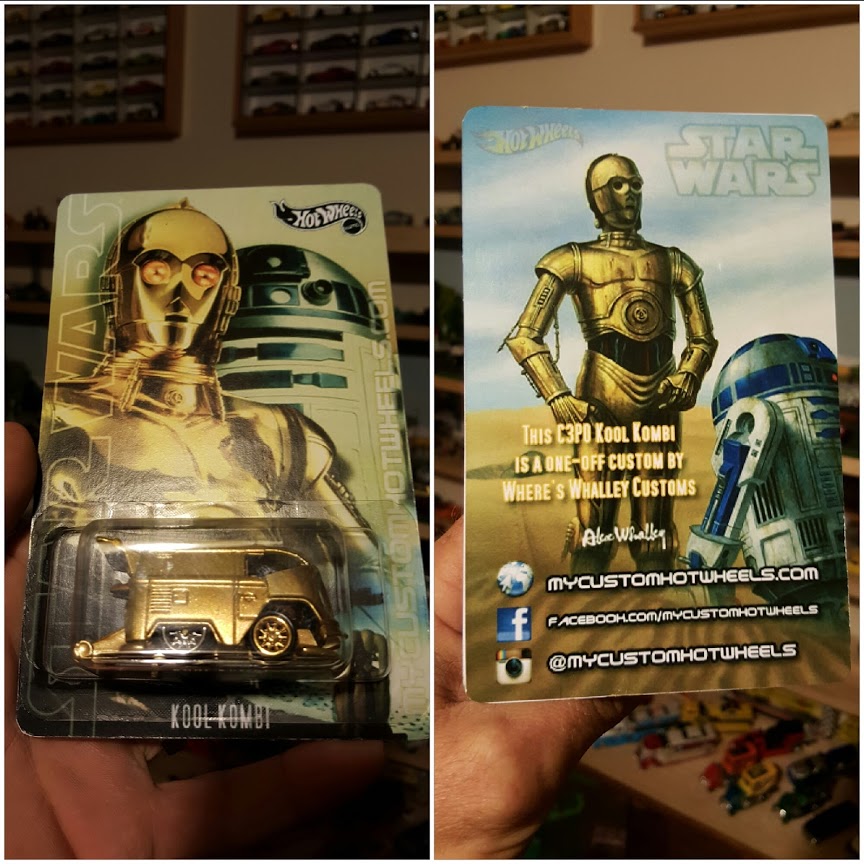 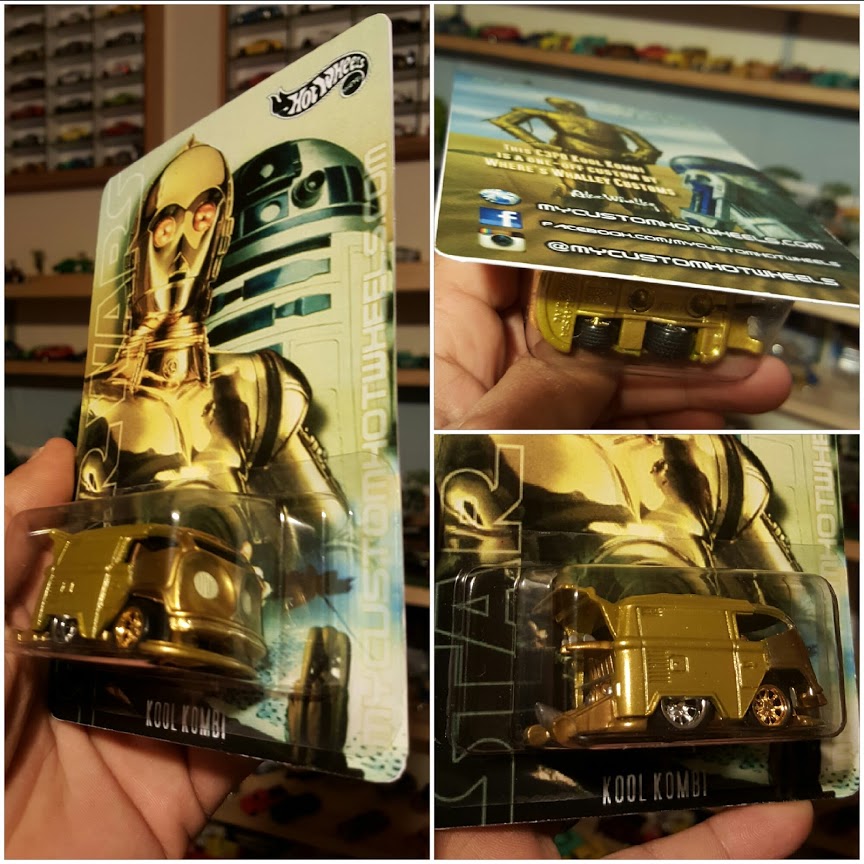 I will soon be making more of these to order if you are interested. This one however I am keeping as it's kinda sentimental, what wiv it bein' the first carded custom and all :p

I'll leave you with this lovely assortment of edited and filtered images of this magnificent custom C3PO Kool Kombi.