Life On The Shelf – Because Straya Mate

It’s been way too long between Diorama Drinks and as such I thought I would make up for lost time with some randomly sporadic moments that I have been lucky enough to capture over the last month or so.

From celebrating Australia Day to rumours of Snoopy being involved in vehicle theft the last month has been CAR-AZY on the diorama shelf, so sit back and relax as I regale you with some of these 1:64 scale diecast moments – which are all totally true btw 😀

January 26th is the Day all of Australia celebrate their national day as it signifies the day White man discovered this continent back in 1788. Some like to call it invasion day because well, they don’t like progress I guess*
*Personally, I think what we did to the Aboriginal people was fucked, but that was over 200 years ago and I’m not one to dwell. Besides I’ve customs to make and can only think clearly in 1:64 scale.

OK now that we’ve delved as deep as you’re ever likely to go here on MyCustomHotwheels.com let’s back to the superficial world of diecast cars and dioramas 😀

To celebrate Australia day all my Aussie diecast castings decided to make their way onto the diorama shelf (amazing!?) and proceeded to cruise around yelling expletives at anyone not in the same make of car as theirs and raising their VB cans to anyone in the same. There were also repeated requests for the women to reveal their breasts, although not in those words 😉

In the end the local RSL won as it stole all their money while they continued to argue the finer points of the Holden and Ford brand. Many valid and constructive points were raised and shared however, the most profound and common of which was something akin to 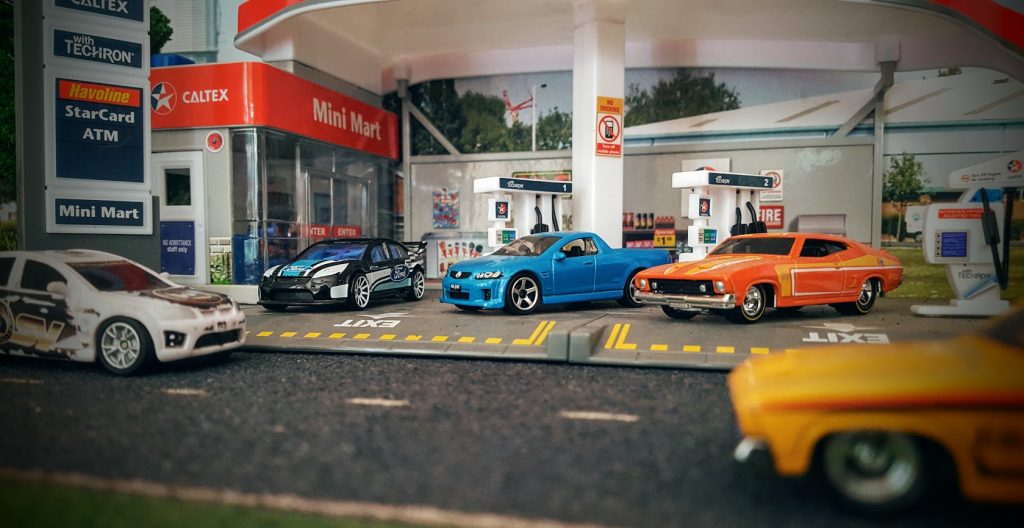 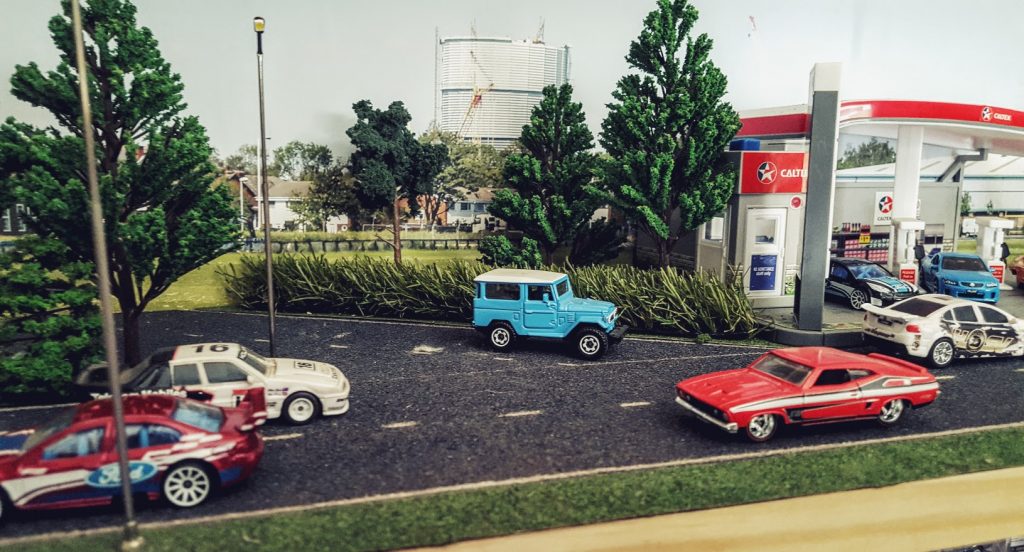 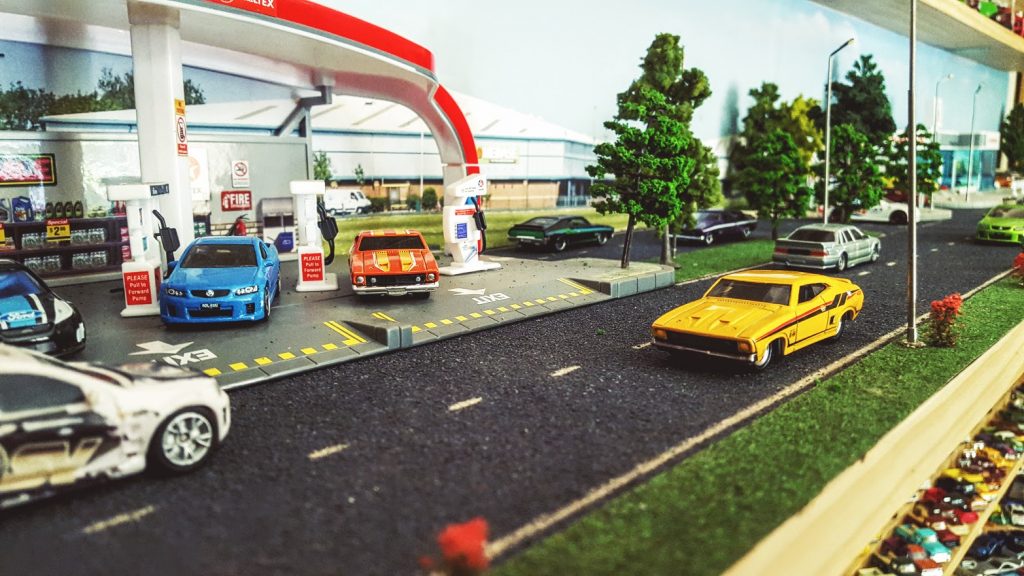 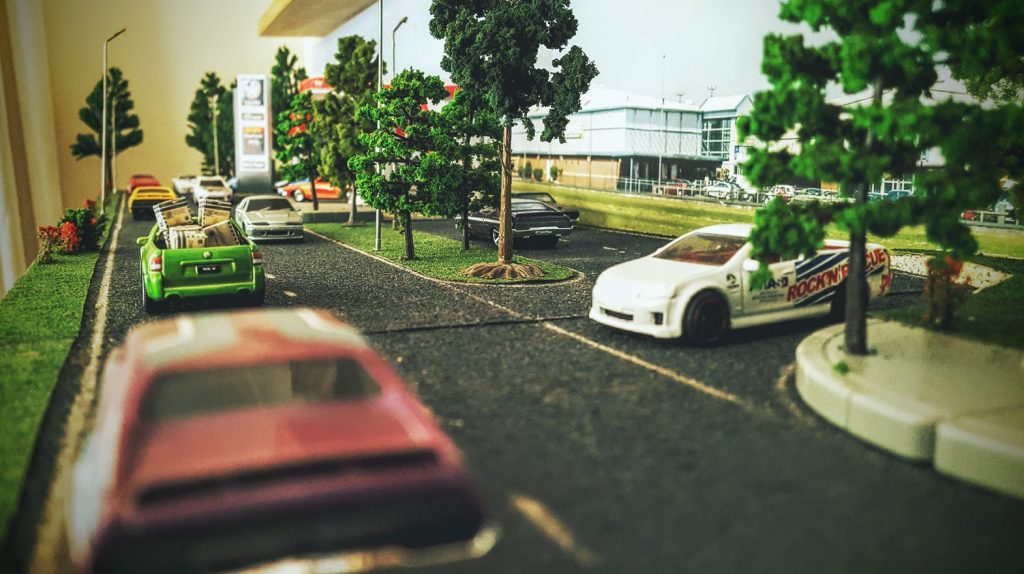 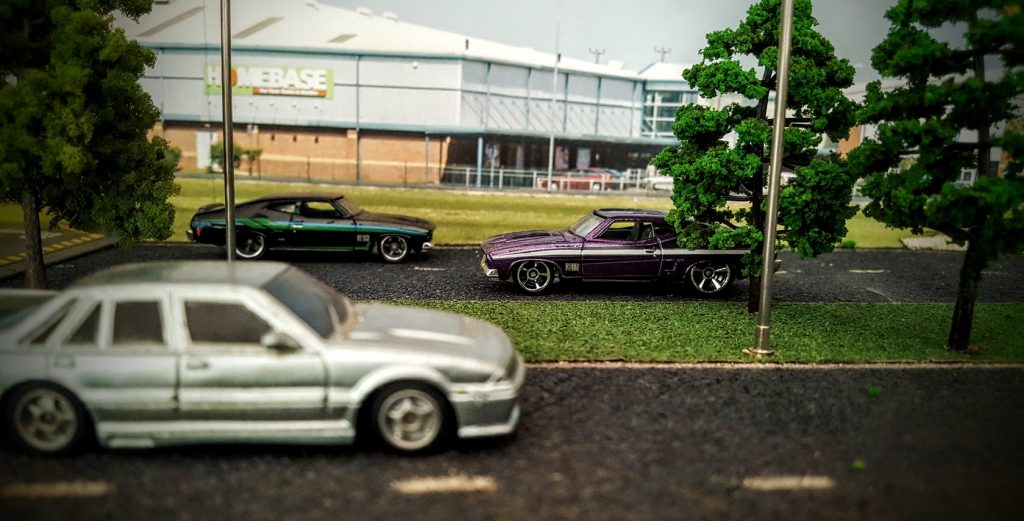 So Which is it – Holden or Ford?

While Holden and Ford fans continue to argue over who is the superior brand and better car I would like to take this moment to remind everyone that it was in fact a Nissan Skyline GTR32 that trounced both [Holden and Ford] in consecutive Bathurst 1000’s – Australia’s Premier V8 Supercar race. This great race and battle for supremacy of ‘the Mountain’ Mt Panorama is arguably the race that sets the tone for who is the greater of Holden and Ford for the next 12 months. Guess it was JDM that dominated in the early 90’s 😉 It would have kept dominating too but the powers that be quickly banned the Nissan from competing after it destroyed everyone in 1991 and 1992, and ‘Godzilla’ was relegated to the streets from that point on. Pity. NOT! 😀 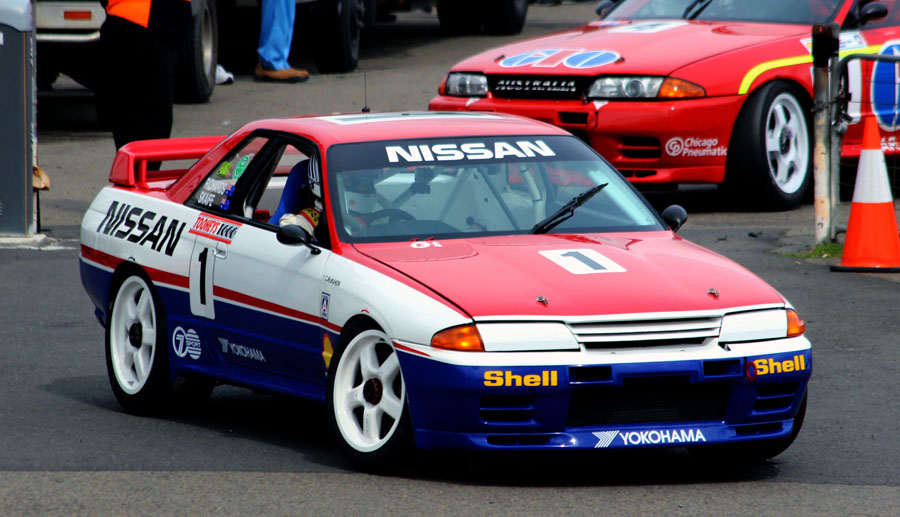 Holden or Ford? I say JDM (yo)

So I’m just minding my own business and playing with my Hotwheels – as one does at the age of 37 ?! when all of a sudden at least half a dozen of the Hot Wheels Police Department cars started blaring their sirens and making their way onto the diorama shelf*
Apparently reports had come through of a Stolen BMW Z3 Roadster. The initial call had been dismissed as no-one in their right mind would steal a Z3 but apparently people will steal anything these days. Clearly I should say 😉

What happened next though was so unexpected that we had to check back through the photos to confirm that it was real! I mean it looked like a dog was driving the stolen Beema, and not just any dog – Snoopy of all canines!!! What the? That’s not like him. Linus maybe – never did trust that sneaky bastard and his blanket – but Snoopy?! Are you Peanuts? 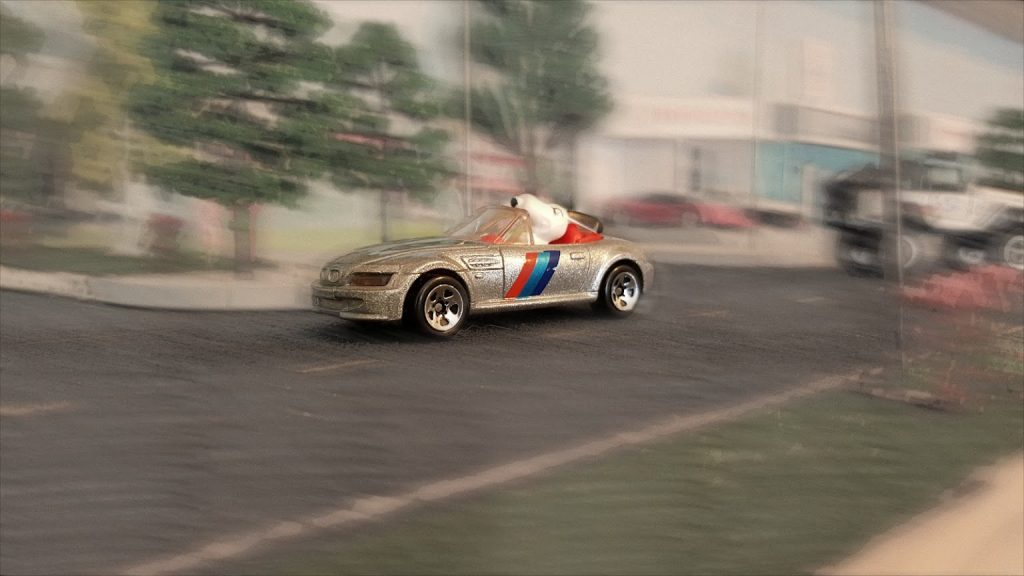 Moments after these images were snapped Snoopy disappeared around a bend behind the servo and for all intents and purposes was GAAAWWWWNNNNN!

By this stage the Police from the Matchbox and Hotwheels Departments had joined forces in an attempt to track Snoopy down but when they gathered to discuss their options they realised none of their doors would open, started trying to yell through the windows at each other and promptly gave up.

Later that day however I saw a suspicious looking character hiding in plain sight – in the back of a ute! I was so impressed by his blatant audacity and the ingenuity of his disguise that I decided not to inform the Police.
Truth is they were all so pissed off about being stuck inside their vehicles that I didn’t really feel like talking to them anyway. 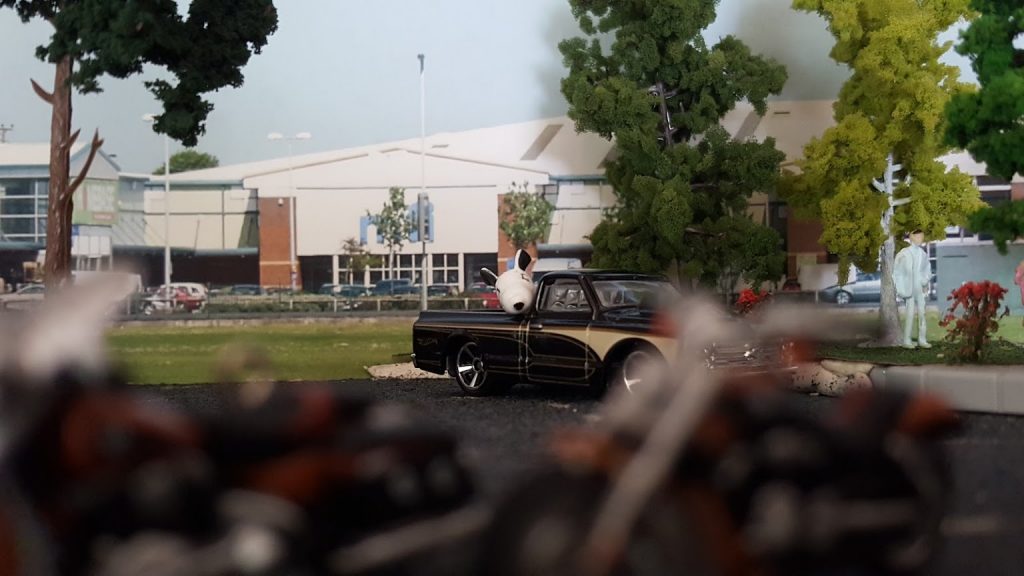 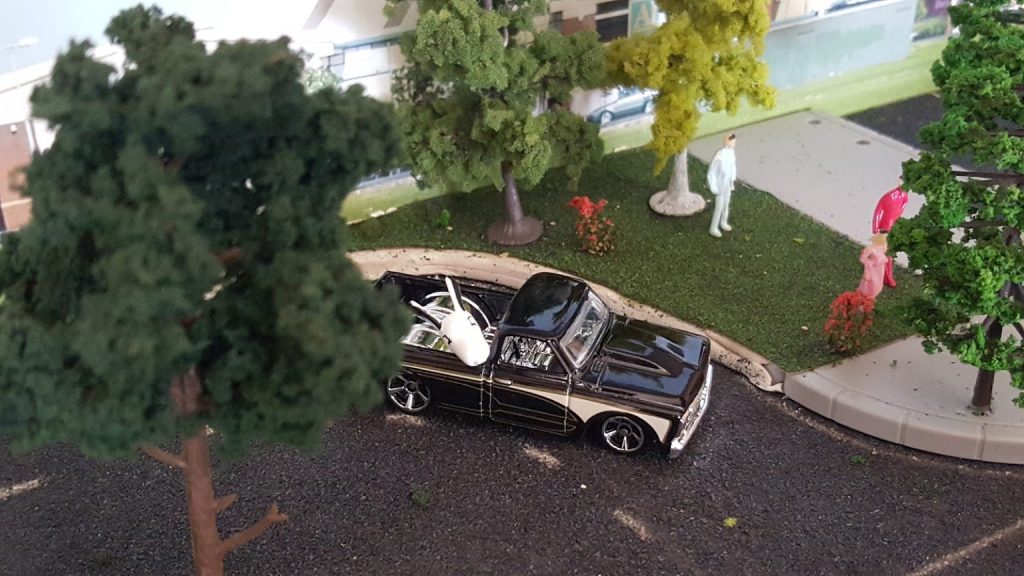 This custom Mustang Fastback-Gasser (dubbed ‘Mustang Silly’) was a custom a built some time ago and like most of my custom creations has sat quietly in a display case on the shelf. That was until I was playing Lego with the kids and found some of those Lego flames – because the moment I laid eyes on them I knew EXACTLY what I was going to use them for… 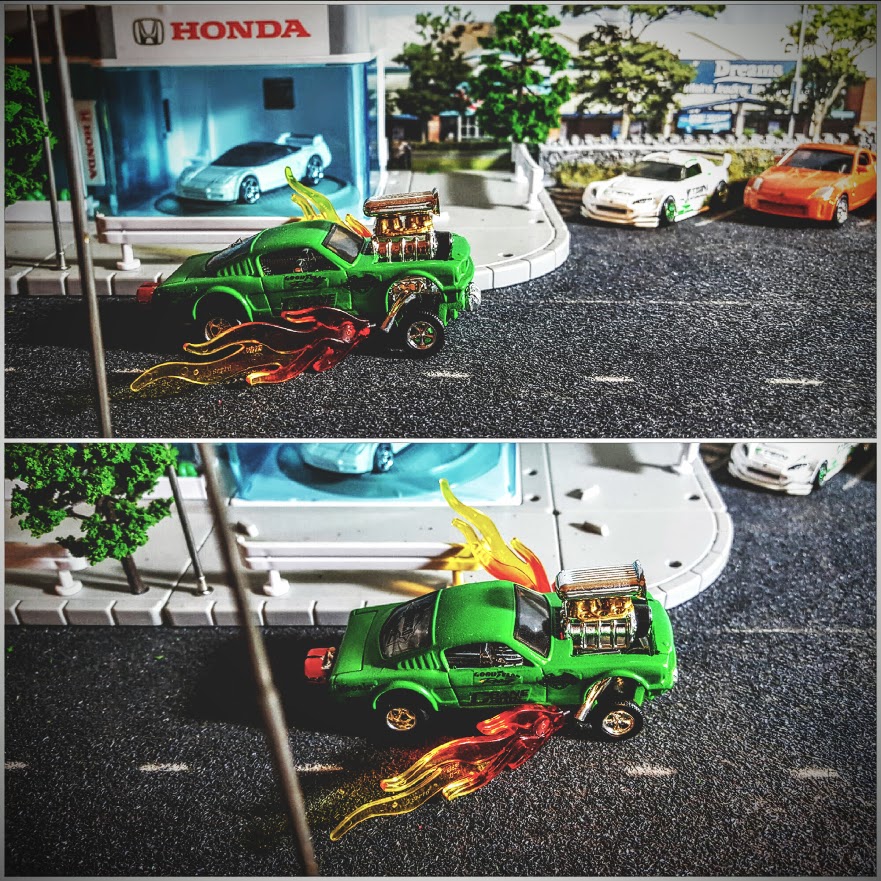 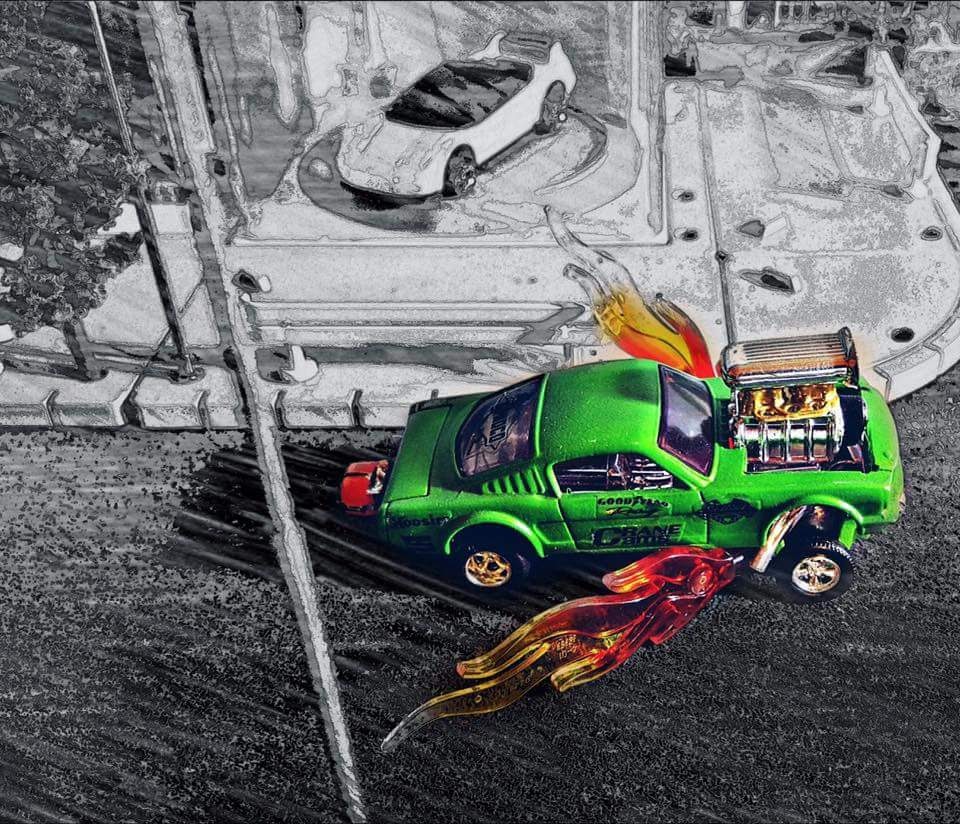 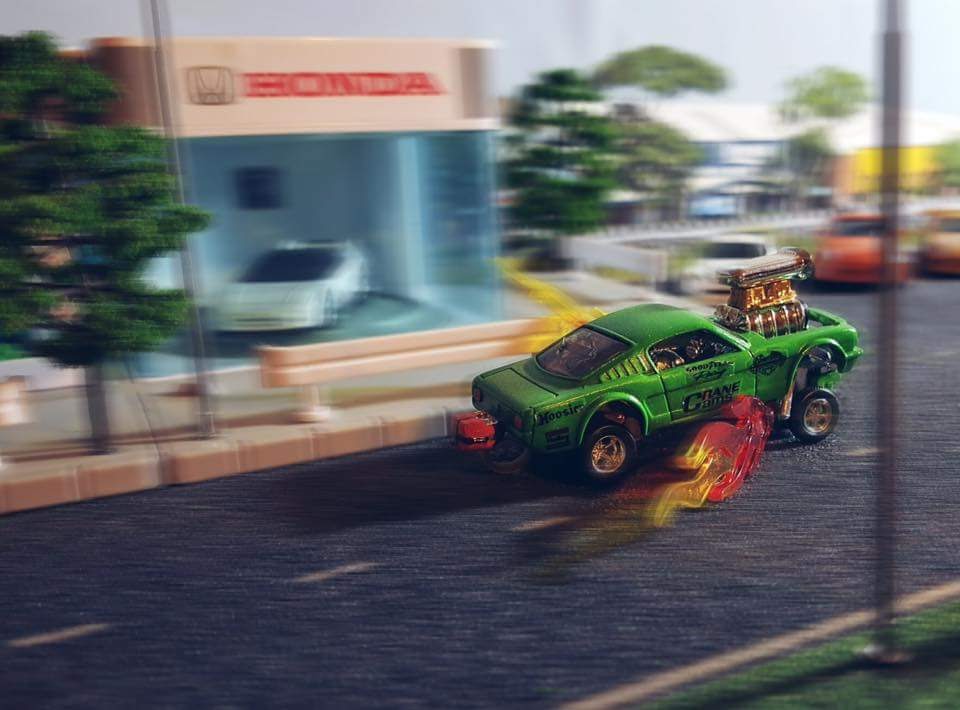 For such a small car those Mini Coopers make an awful lot of noise! Of all the cars that use my diorama shelf it would have to be the Minis that enjoy it the most. They gather in groups and drive like mental fruitcakes around the streets, cutting through shrubbery and knocking over street lights – the clean up afterwards is a nightmare! I really should just remove their wheels so they stop making such a mess but truth is they are fun to watch as they take corners at breakneck speed and wind around the sidewalks and through the servo way quicker than seems possible.

I only have a couple of photos of these moments because most of the time they are either driving too fast to get a decent shot or they knock so much crap around I have to fix it before taking the photo. Raaaah! 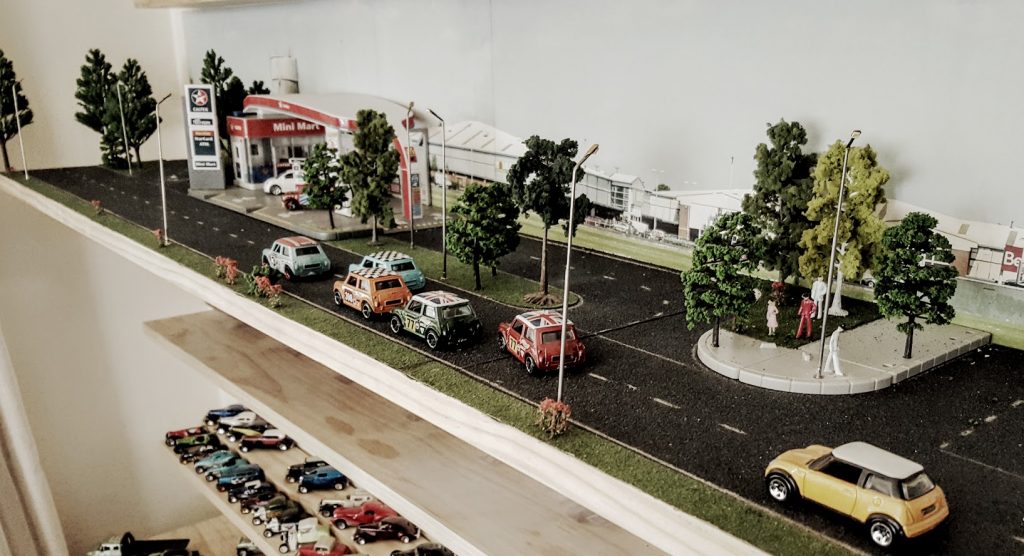 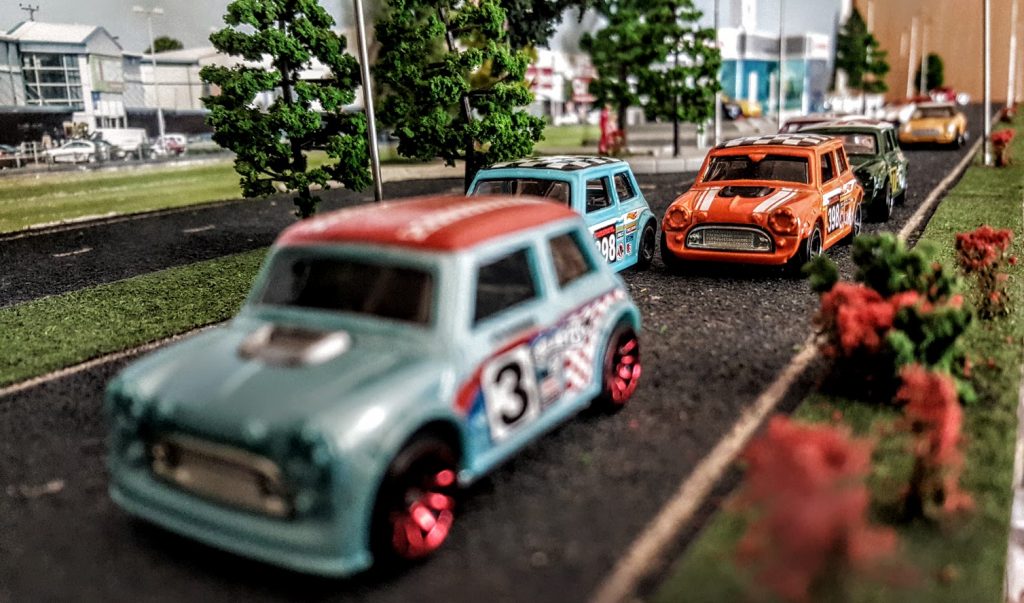 Romeo Romeo, Where For Art Though… Alfa?

Ok so the most awkward thing happened a few days ago when I might of kinda sort of made a sweeping generalisation and massively insulted someone in the process. See what happened was there was this Pink Alfa Romeo driving slowly and looking quite lost. I decided to be a gentleman and offer assistance to whoever was driving and when the driver stepped out I mistakenly thought SHE was a HE!?!? Granted “he” had excessively feminine qualities but clearly this was a guy…sort of. Worse still was not only did I think this was a male, I instantly then decided he was Gay and most probably a hairdresser. Nothing wrong with any of the above and lets be fair – not a bad assumption to make when the car is a pink Alfa.

So anyway… after the awkward moment has subsided (as much as it would anyway) I helped “Her” find her way back to Diecast County and bid her farewell.

As she was turning the car around to leave she motioned me over and advised that she did in fact used to be a hairdresser. Oh wow I exclaimed, and what was the name of the Salon you worked at?

She gave a wink as she accelerated away, her tyres kicking up clouds of dust as the answer came back over the sounds of the engine “Jim’s Barber Shop – I owned it”

Hellashopped! That’s what this Dope as #&% Nissan Skyline/Infiniti G37 is – and in case you’re wondering what on earth Hellashopped even means ah HA! – it’s a totally new term that I just made up!*

*I’m thinking I really – REALLY need to go outside more often as my mind may be slipping somewhat. It’s not that I don’t want to though.
It’s just that the fridge tries to crash tackle me every time I go near the front door so I simply don’t bother anymore

I love my custom Hot Wheels, but the reason I started doing it in the first place was so that I could make hellaflush cars and stance the shit out of anything and everything I could find. I would never do it to my normal car because it’s ridiculously impractical and hellastupid but DAMN it looks good! The answer of course lies in 1:64 scale where the cost of camber is less than that of a coffee. Can anyone say WINNING!??! 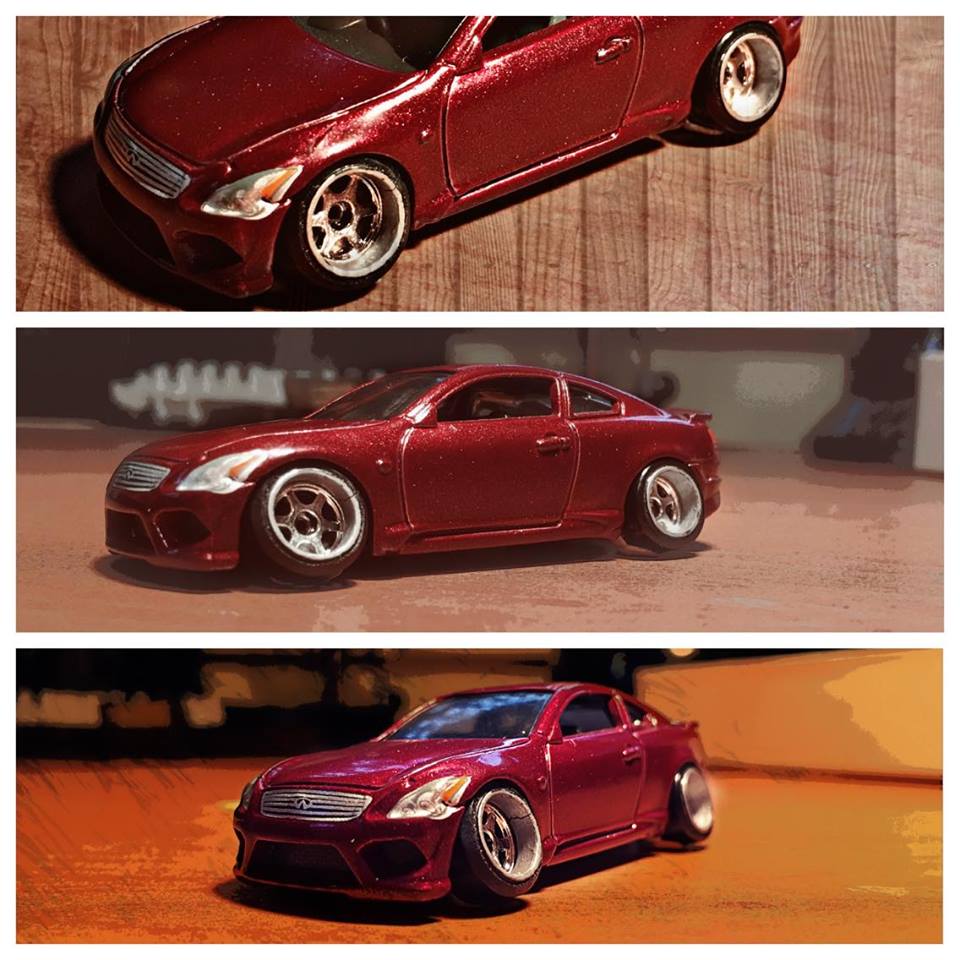 So anyway back to my awesome (read: stupid) made up word – sometimes after creating my customs and taking photos of them I get HellaBored and when I played shits and giggles stancing the above Infiniti G35/37?  I decided to have some fun with the backgrounds – photoshop style. 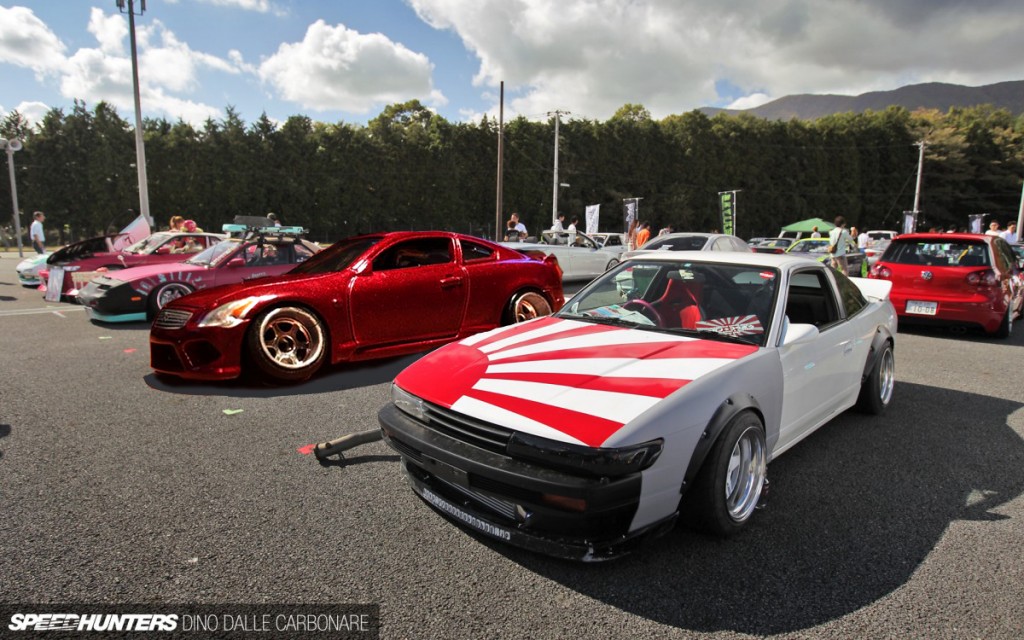 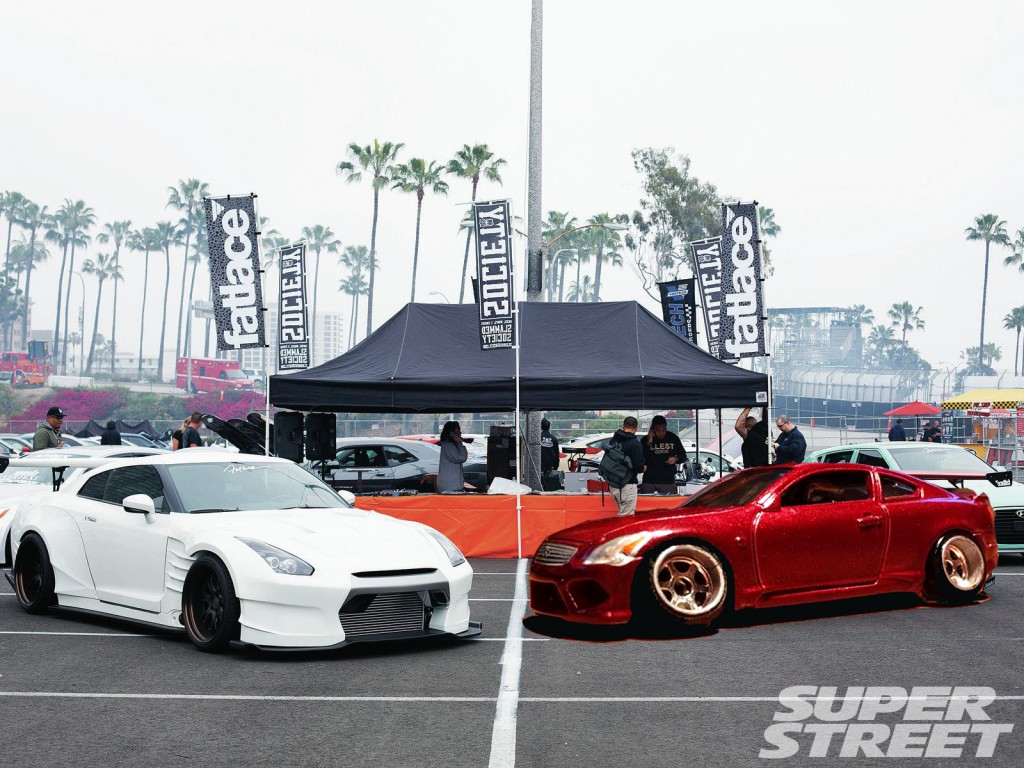 Is it just me or did it suddenly get really cold in here?

Not sure I am happy with the current guest cruising around the diorama shelf but I’d rather leave him to his own devices and hope that like an election promise he just goes away never to be heard from again.  Of course there’s a really good chance it’s just a dude in a fancy dress costume heading to a party but then again he’s the only one I have seen dressed in anything ‘fancy’ so unless it’s a Twilight Party – in which case all the guests would be sitting at home feeling too sad about somethingsomething to go anywhere. Yeah too many variables here – like I said, think I’ll just leave him well alone and go for a coffee or something.