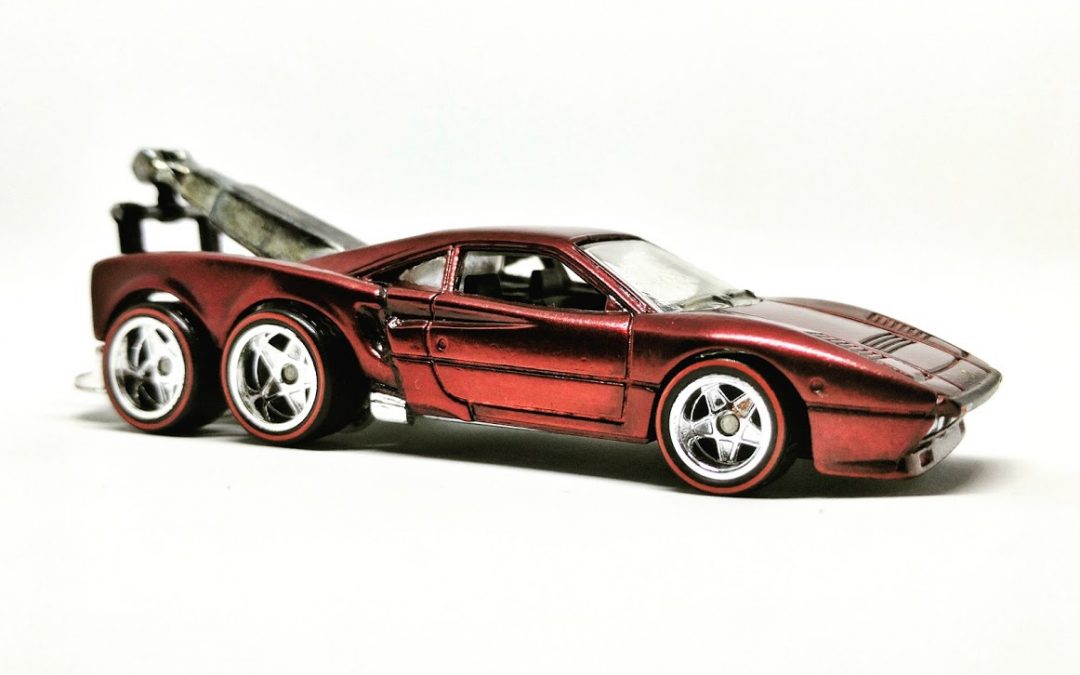 What do you get when you cross a Ferrari 288GTO with a Tow Jam Casting? A Ferrari Tow Eighty-Eight 😀

I remember when I was admiring the Tow Jam (mainly for it’s awesome tow hook and rear rig setup) that I kept thinking about how the overall shape reminded me of a sports car with the same rear design that a mid engined car might have. Of course this led me to my Euro shelf where I started eyeing…well OK I pretty much wen’t straight for the Ferrari 328/308/288s because being my favourite shaped car of all time I have a fair few 😀

There are a number of ways that you can join two castings together (methods all covered in the Beginners Bible) but the method I prefer is the one that involves the least amount of work. #WorkSmarterNotHarder. The least amount of work means not utilising JB Weld, Epoxy Putty or any of the other types of bonding agents you can employ when joining castings together – in this instance we are only going to use a small (and I mean incy wincy teeny weeny yellow polka dot bikini small!) amount of superglue to bond the two halves together. Now it should be noted that when you choose to use a bonding agent like mentioned above you usually still need to start the process by using superglue to hold everything together. You would then use the putty (or whatever) to not only strengthen the bond but also to smoothen out the join between the castings – making it look almost seamless.

It’s at this point that I would like to flick the bird to Hindsight because after finishing this particular build I was annoyed at the fact the join was anything but seamless and whilst I had made every effort to cut and file perfectly, the air induction scoop thingy’s on both castings don’t match up and this will now forever haunt my dreams!

And since a picture is worth a thousand words… 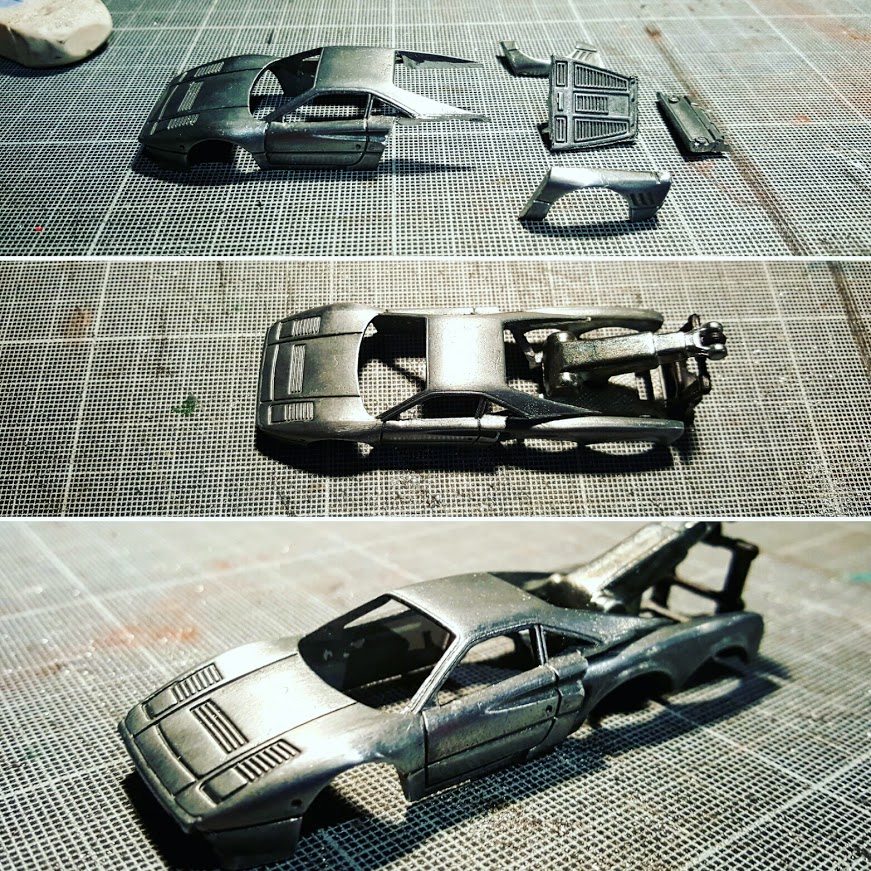 To add to the thousand words above, I basically had to do some seriously delicate cutting (with my trusty Jewellers Hacksaw) in order to keep the rear roof pillar and struts of the Ferrari in play. I also then discovered (to my horror) that the width of the Ferrari and that of the Tow Jam were noticeably different (more horror). I resolved this matter by gently, and I mean ever so gently stretching the Tow Jam casting until it was exactly the right width. (I did this using a pair of pointy nose pliers and just opened the handle a little more each time, letting it slowly bend – checking each time that the metal was not cracking or bending where it shouldn’t) 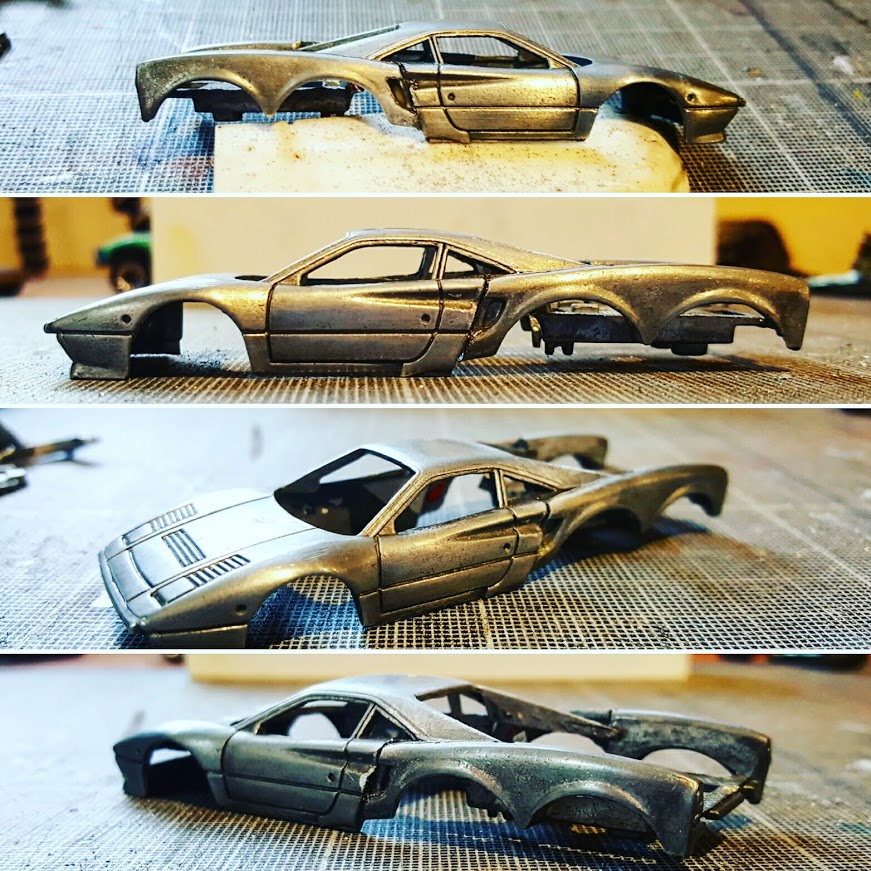 Once I was happy with how it joined together I set about fine tuning the joins with small hand files until it was good enough that I didn’t need to use epoxy putty (Yes I know – SHUTUP!)
Since I wanted a Spectraflame type paintjob on this bad boy I was going to need to polish up the casting to an almost mirror sheen – in fact it was for this very reason that I avoided using epoxy putty – since the putty would cover a lot of the metal body and thus make it quite hard to maintain a spectraflame effect across the entire surface…but I digress.

And now it was time for the – oh look, shiny thing! GAAWWWDDD now I have to scroll back up to see where I’m at!? …  PAINTING! 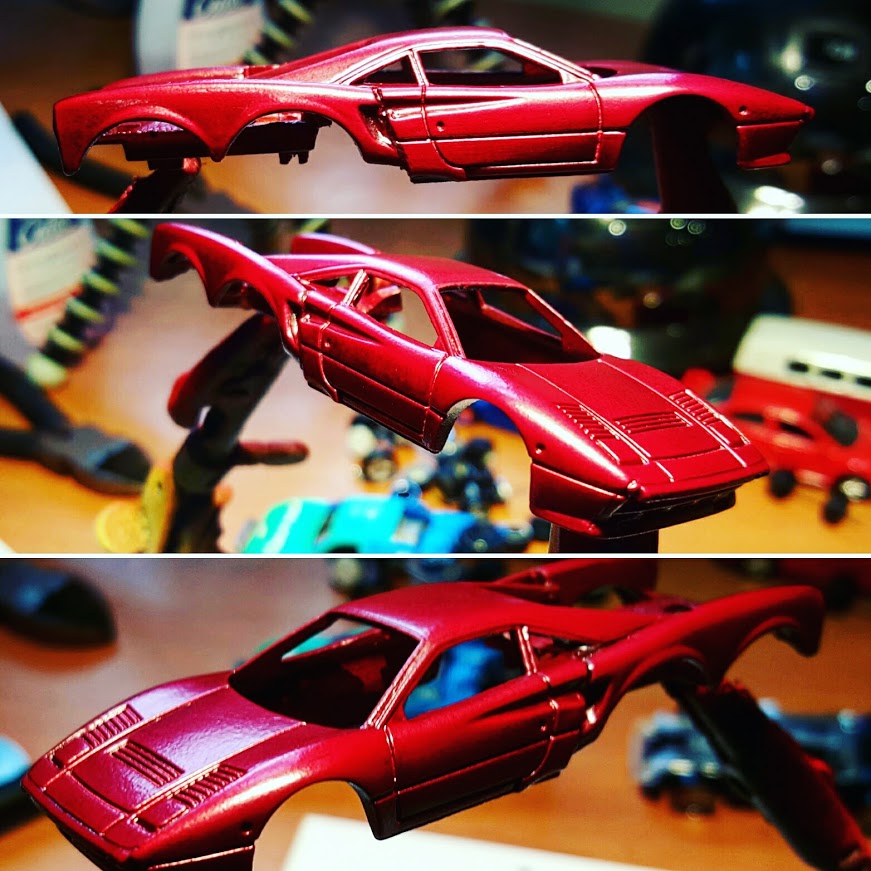 Photos never really do paint justice and in this case they actually changed it completely! – the colour of this Ferrari Tow Truck Mash-up is actually a really deep cherry red – almost a burgundy/red-wine sort of colour. I guess my phone realised that all Ferrari’s are supposed to be red and set about remedying that 😉

Now it was time to add the details and put her together – complete with a join so seamless I reckon Stevie Wonder could see it :p

Introducing the GTO with a W, The Ferrari Tow Eighty-Eight 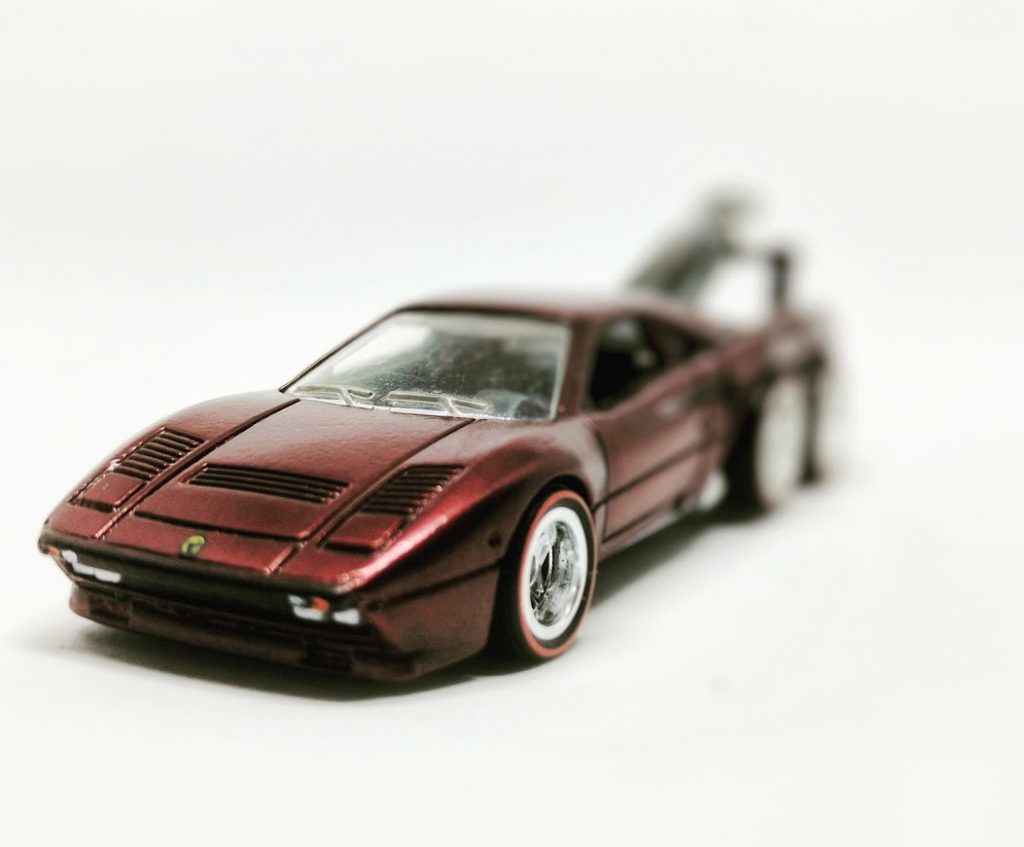 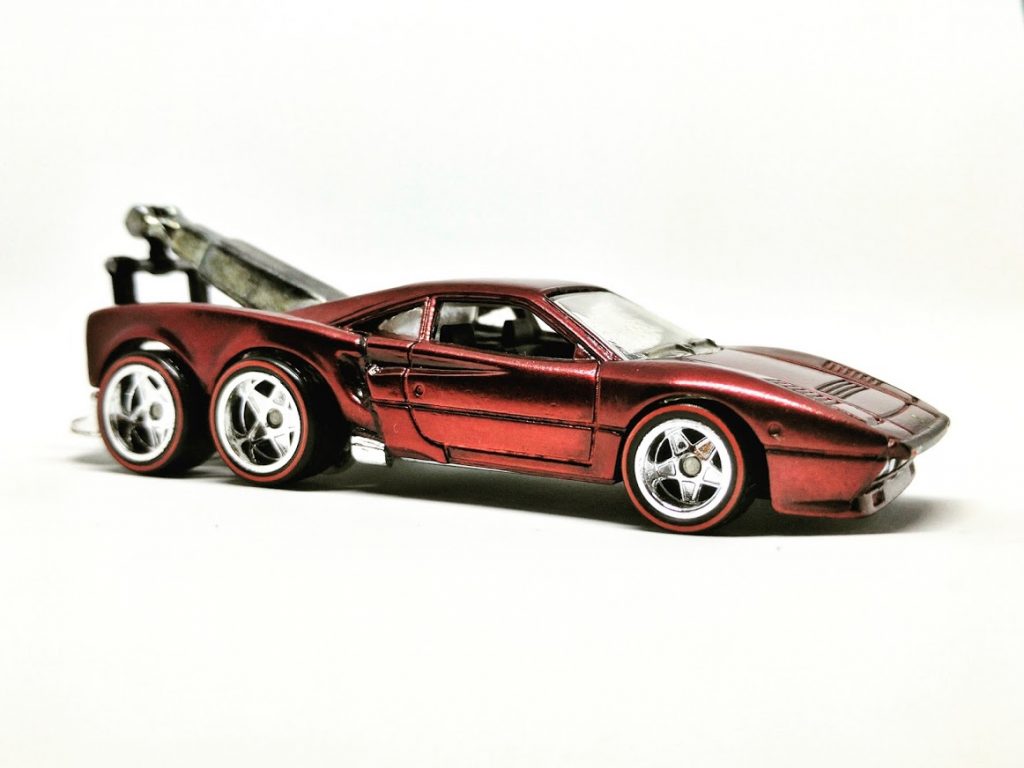 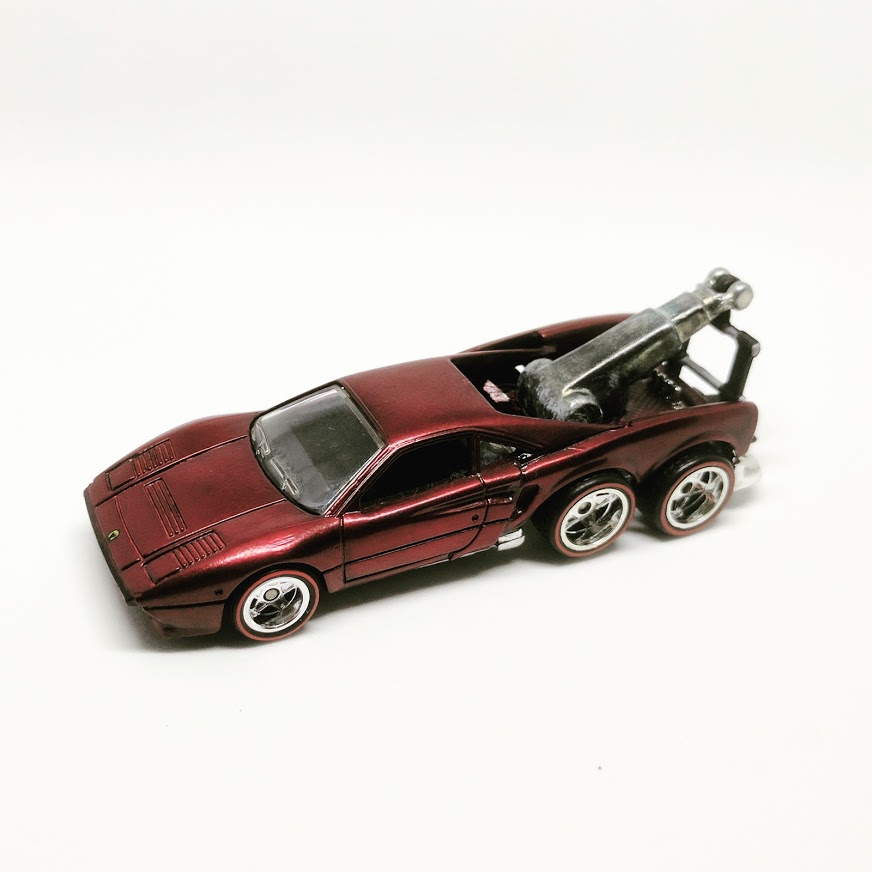 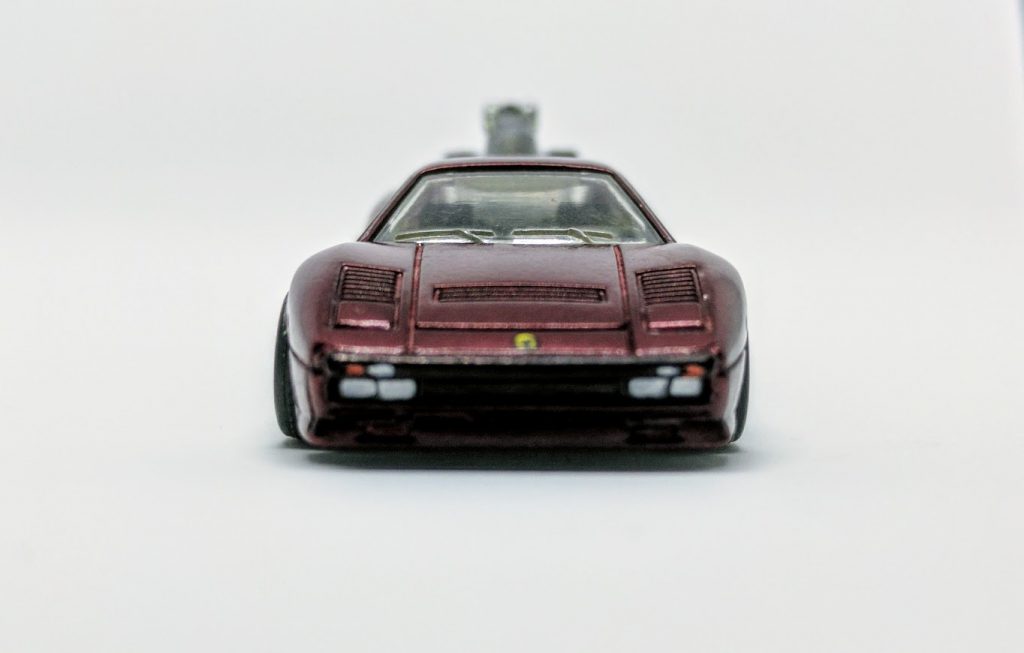 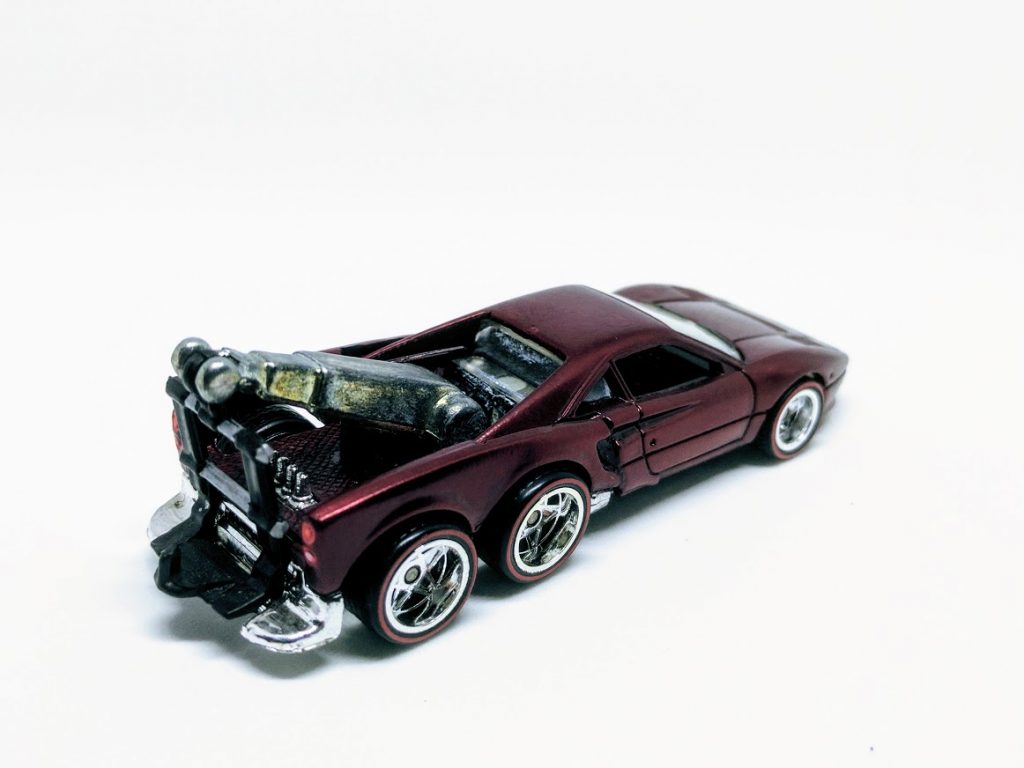 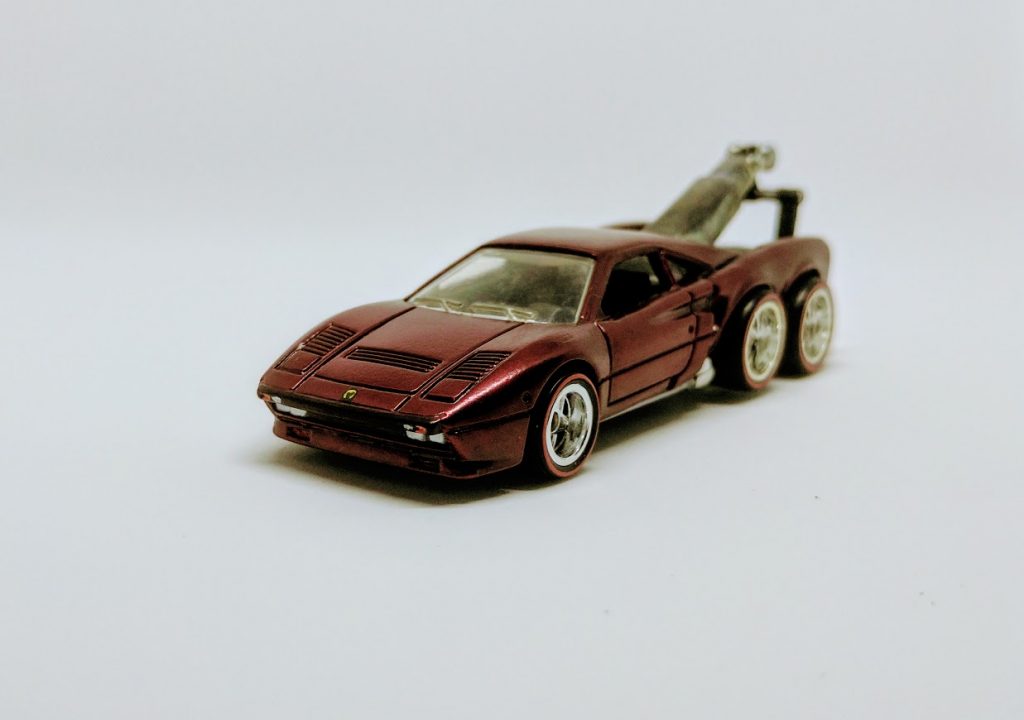 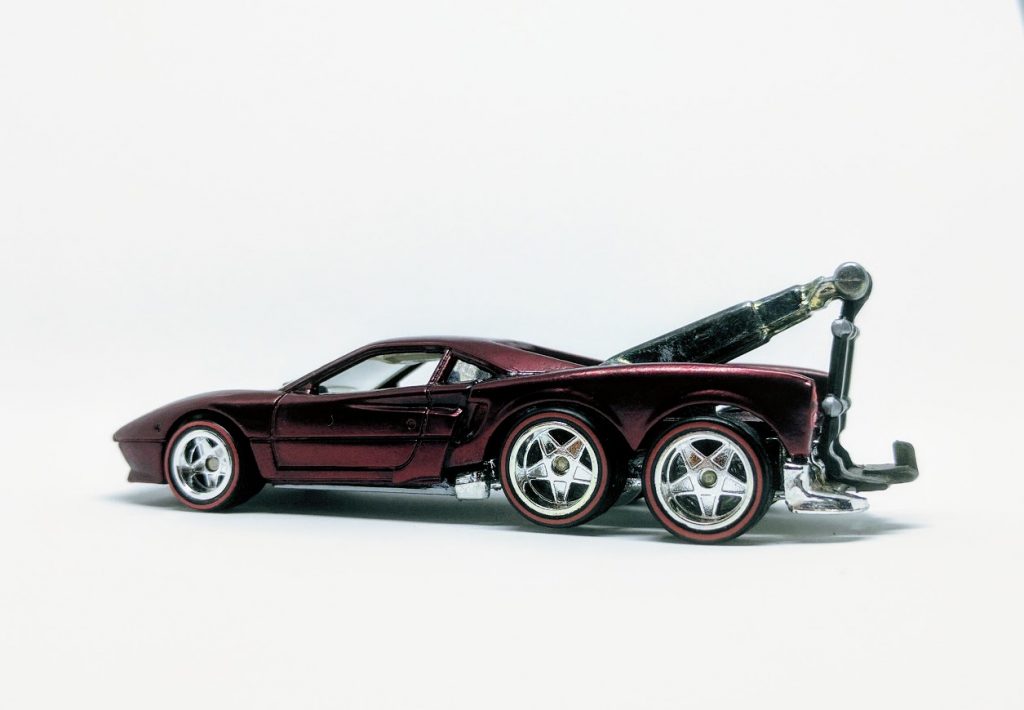 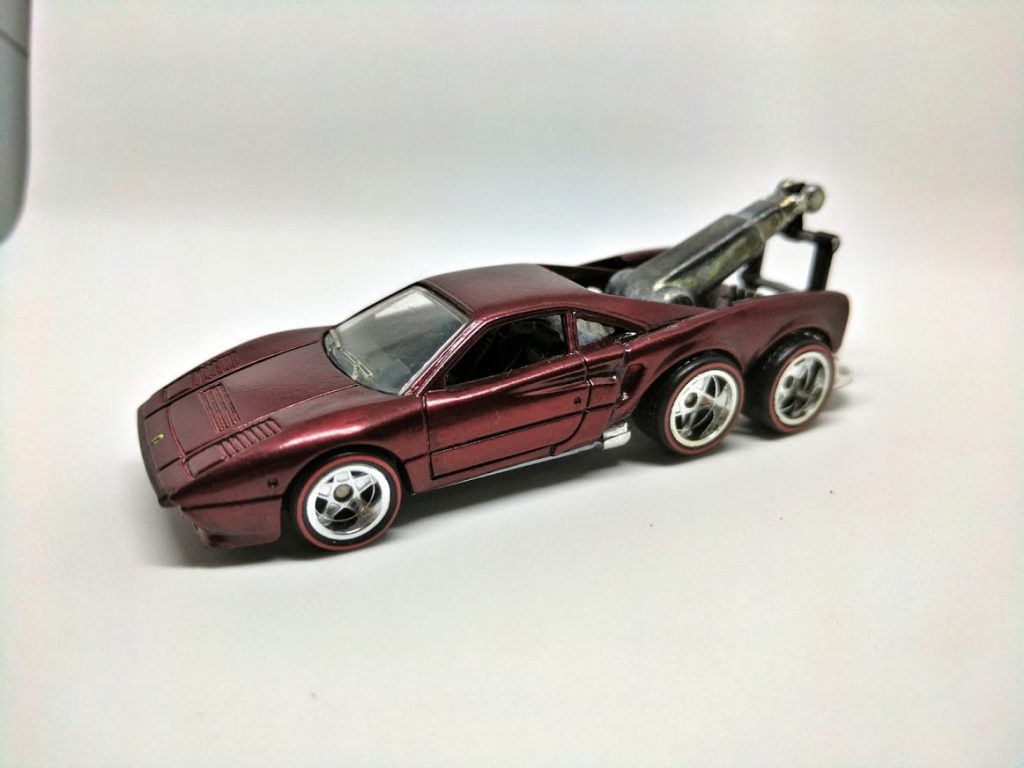 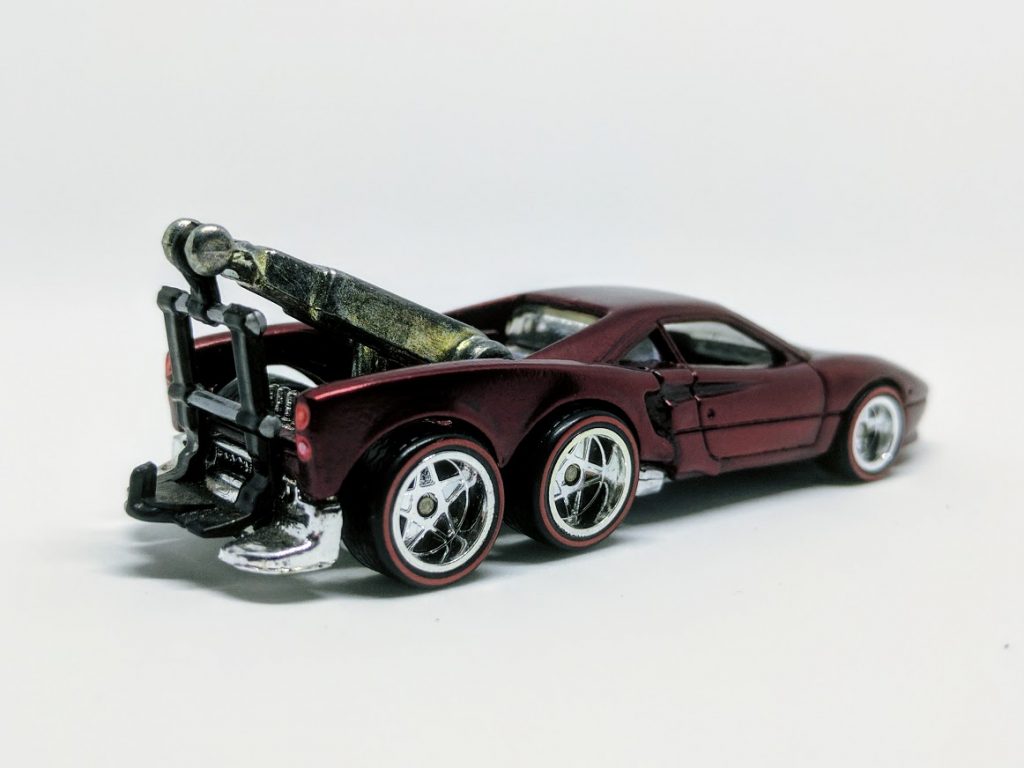 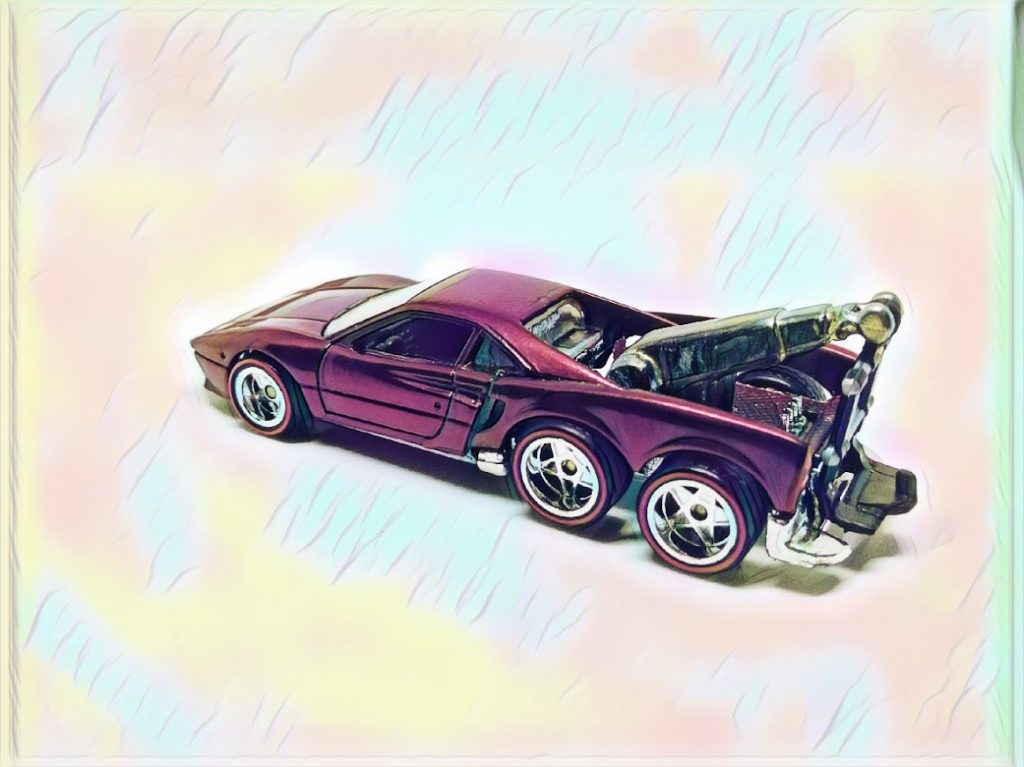 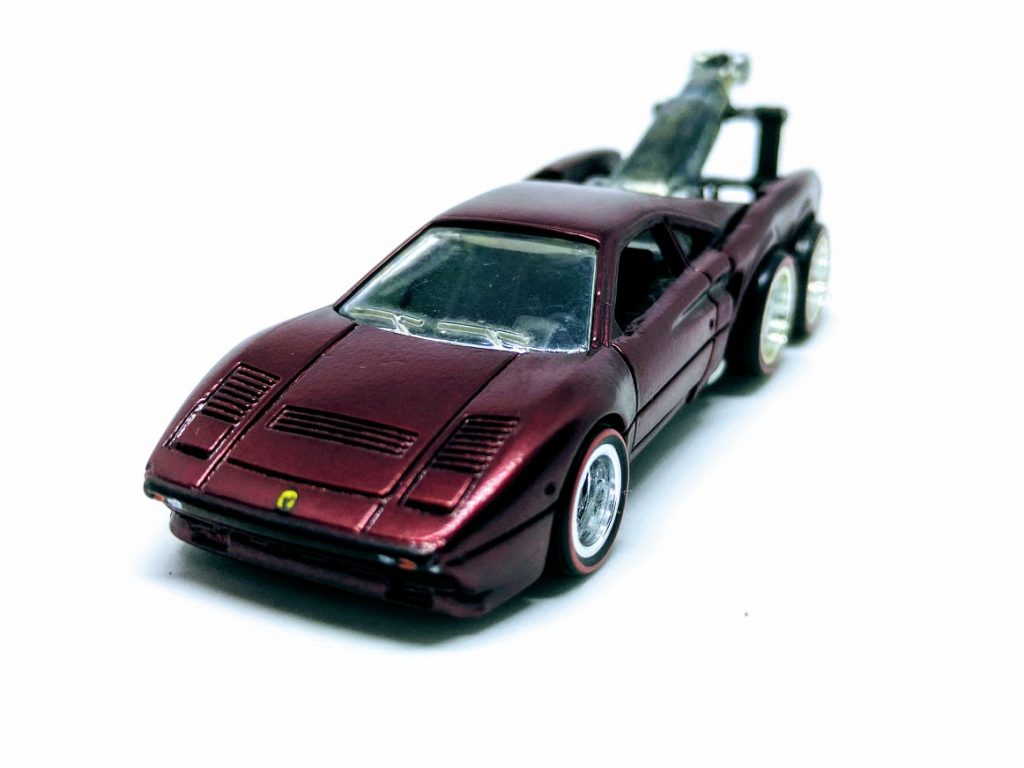 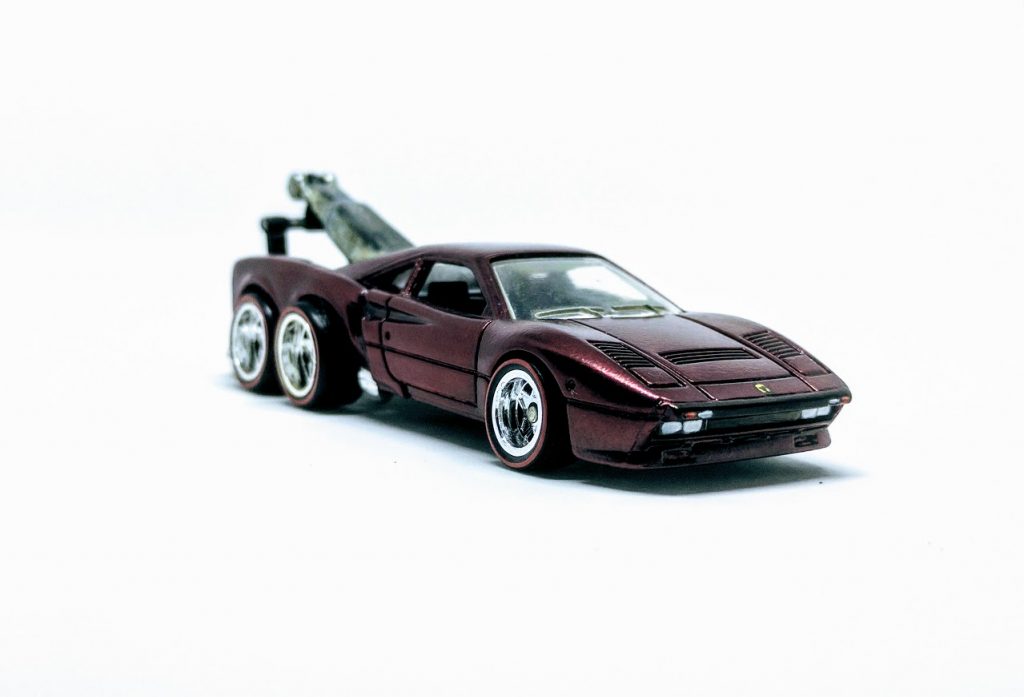 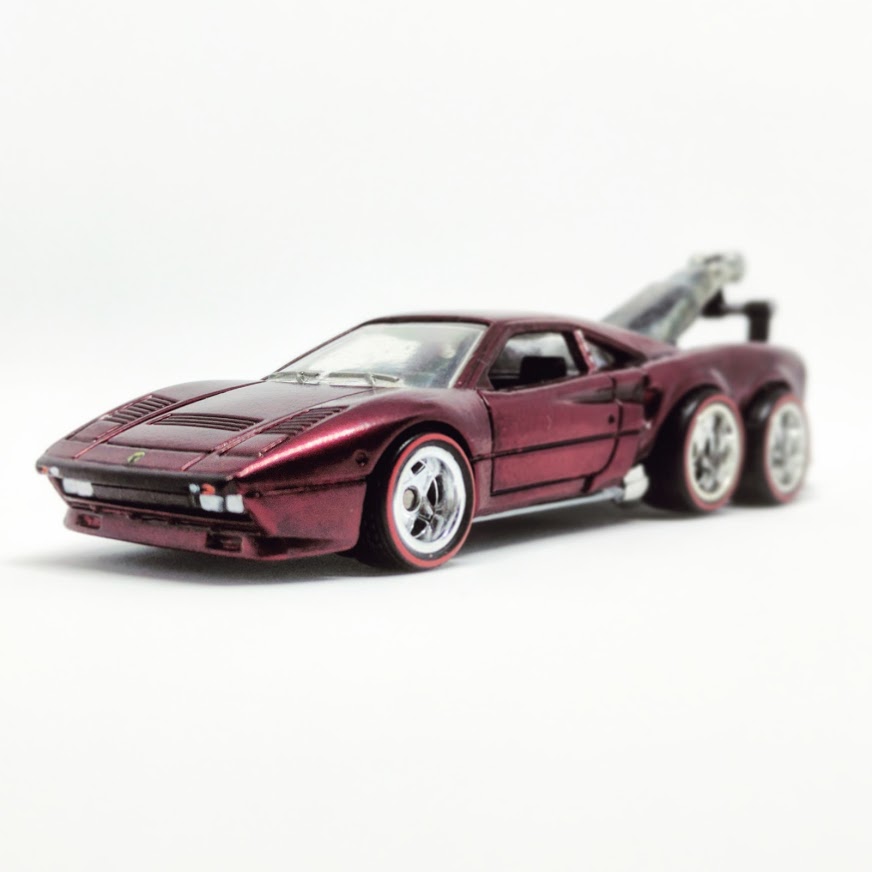 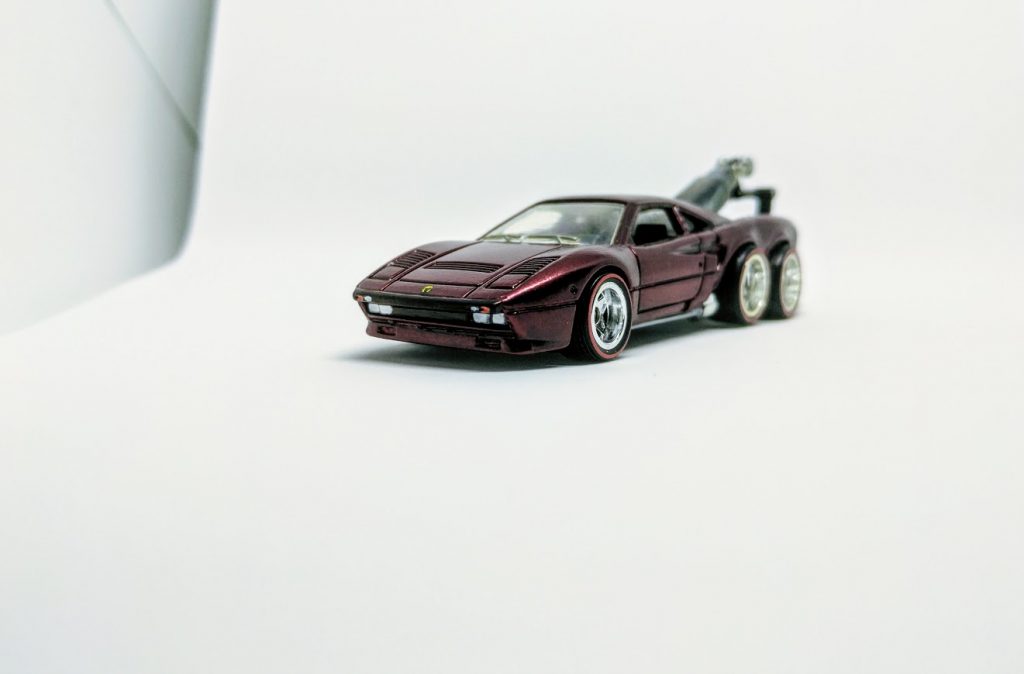 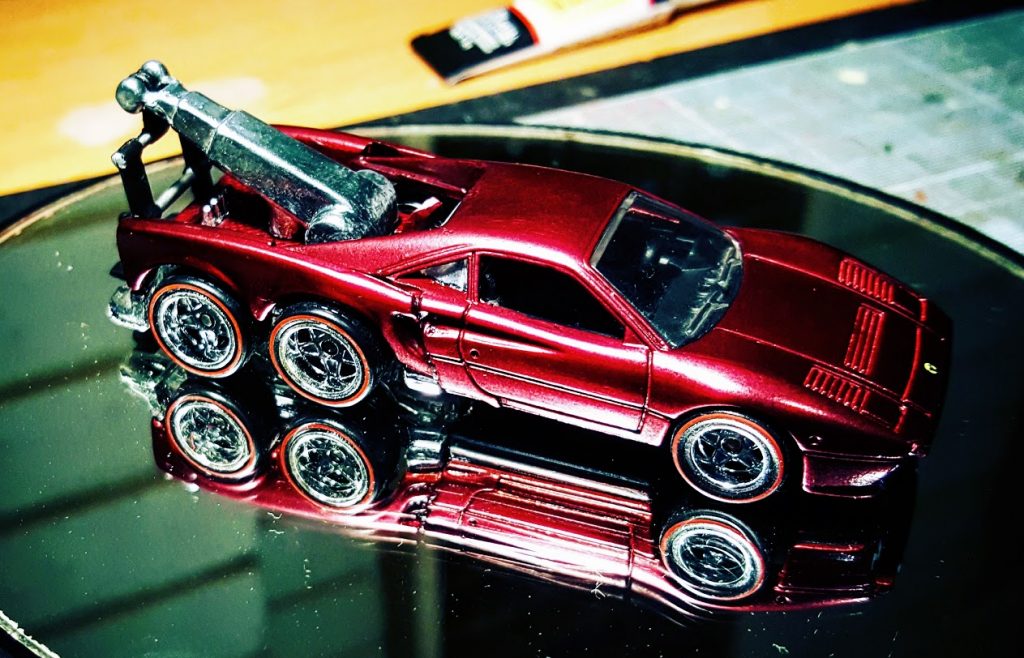