The Kool Kombi That Became a Logo

It all started with this…

Little did I know that I was creating my own logo.

I was toying with the idea of making a bike with the Kombi on top but quickly decided it would look better as a trike – I did love the look of the rear end after all 😉 so I started playing with parts from the ‘parts bin’ to see what would work best.
I ended up going with the exhaust from a Batman/Joker T-Rod car (the ones that are bright green – well they were anyway) and then went about choosing an engine. The Mad Fast Casting offers one of the most aggressive and instantly recognisable looking engines and was the obvious choice. I then had to add another engine block from god knows what so that the Mad Fast engine would stick out of the top of the hole I had just cut in the roof of the Kool Kombi.

The Wheels, which I stole from a Jada Nissan 350Z were a perfect choice and set the tone (excuse the pun) for the final colour scheme. 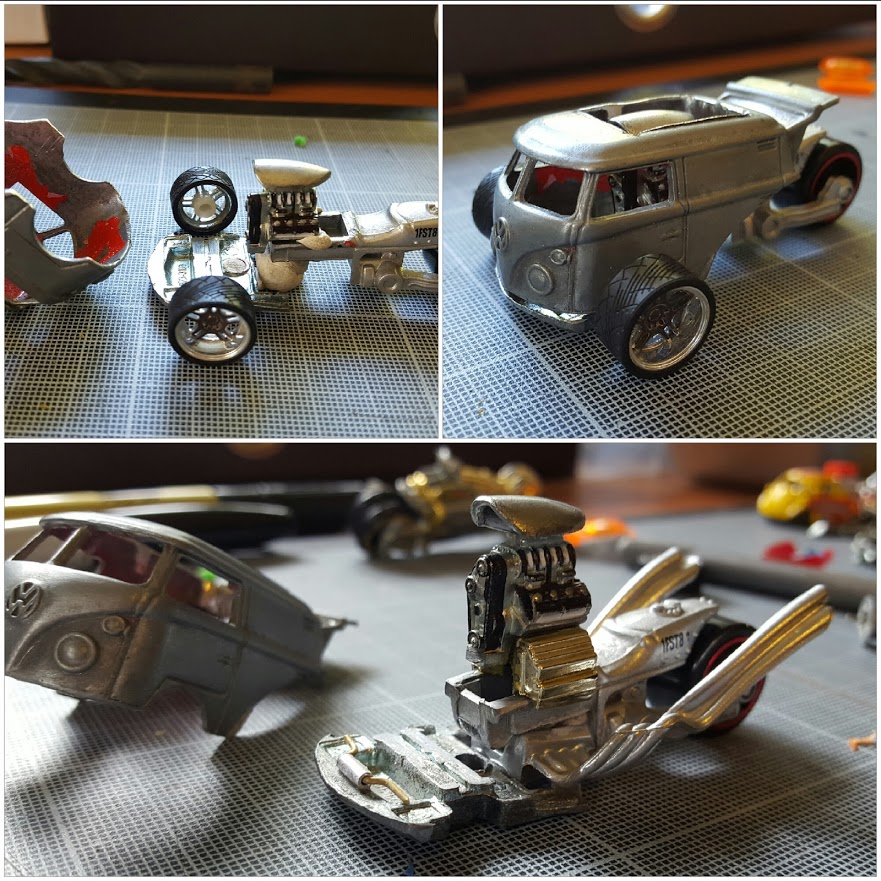 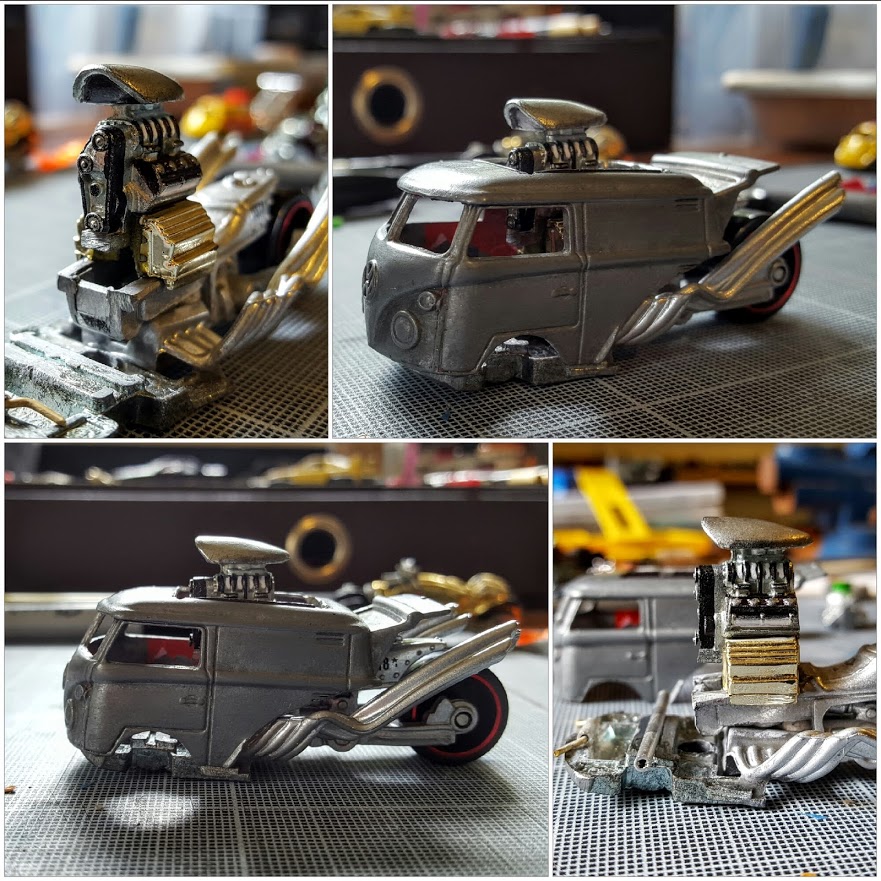 From Concept to Custom

The hinge mechanism you see in the pics above was my attempts to create a body that would pivot forward and back. The issue I had was that the engine was so bloody big it actually caught on the back edge of the roof – so the hinge idea was scrapped. 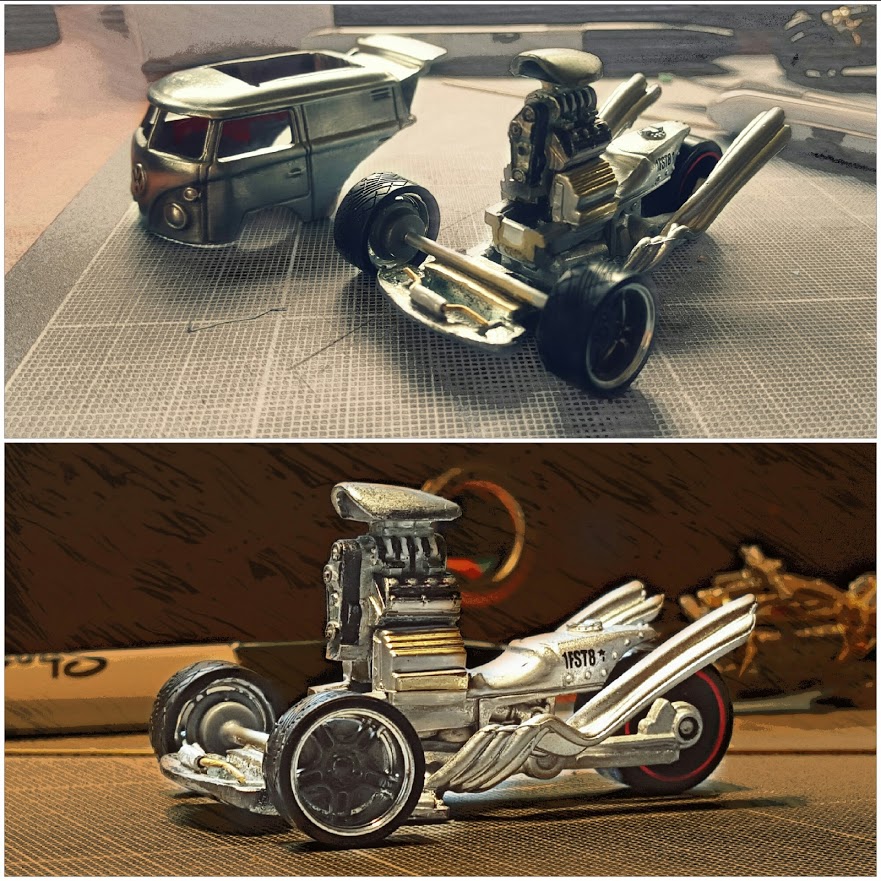 You know you’re on the right track when the WIP looks this badass!

…show a Kool Kombi with a simple two tone colour scheme – gunmetal grey over polished diecast. I decided not to detail the headlights because A: this is a dragster so the lights would not be operable, and B: because I liked the raw look and didn’t think it needed the details to be honest. And C: because it’s my party and I can cry if I want to! 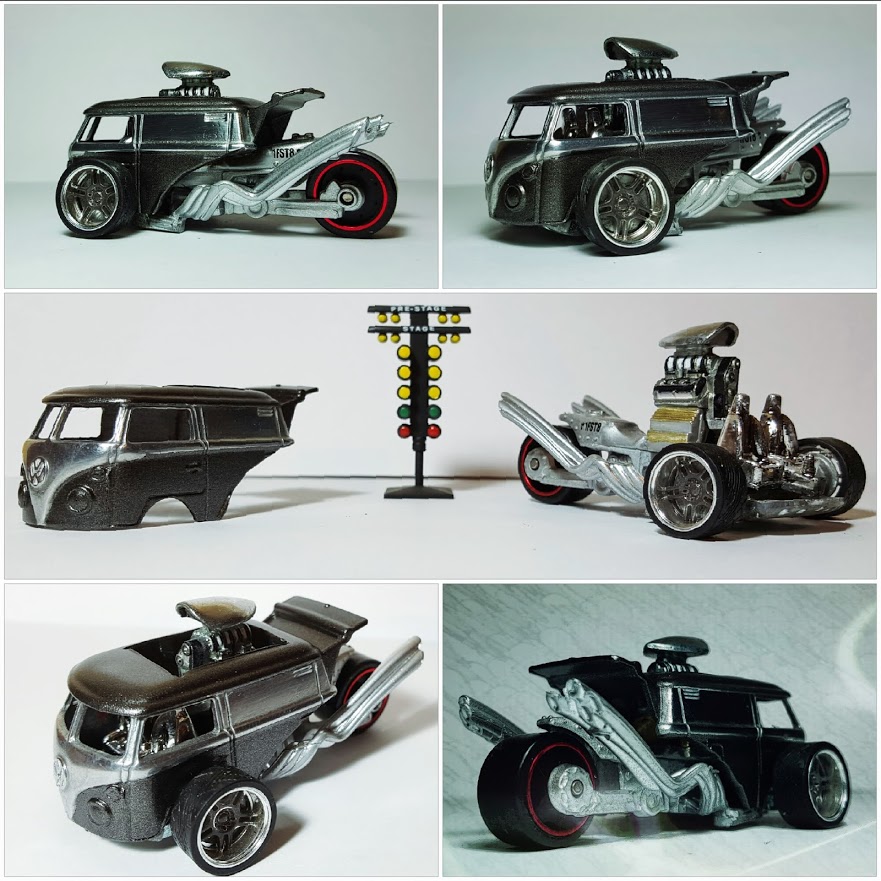 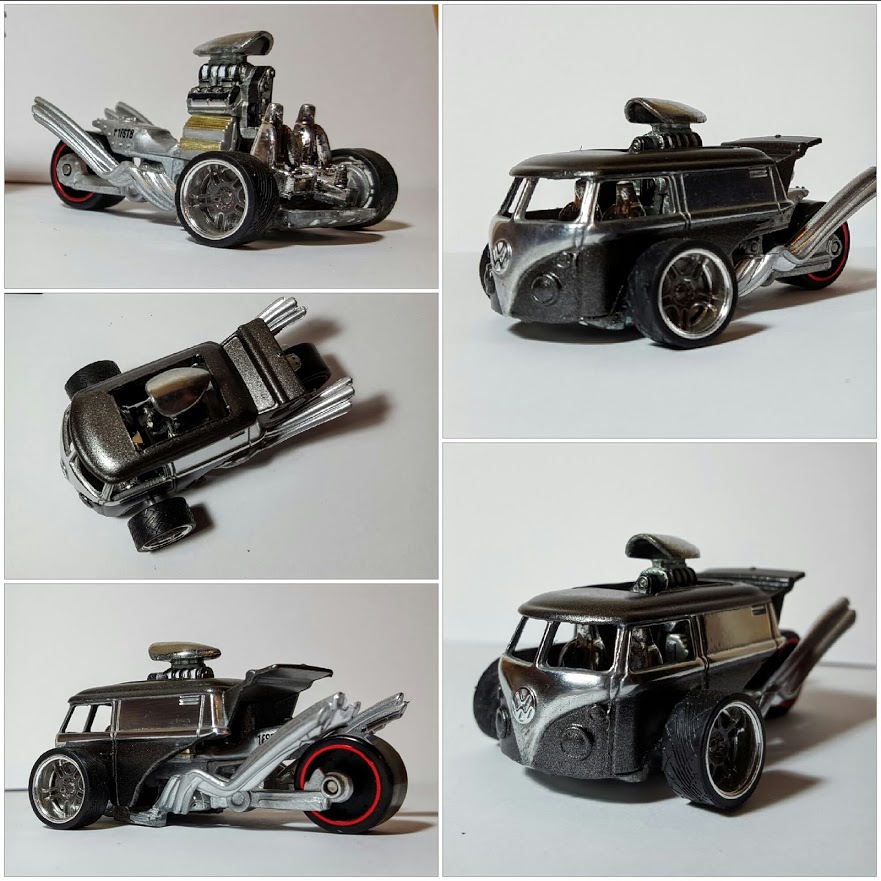 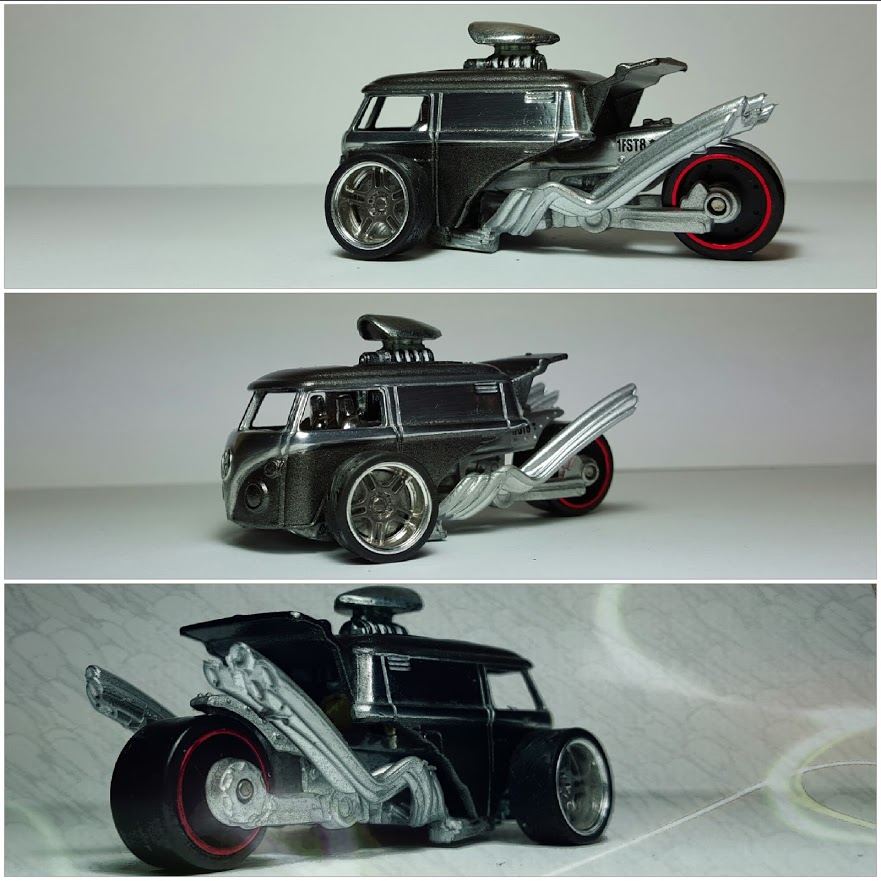 And the individual photos: 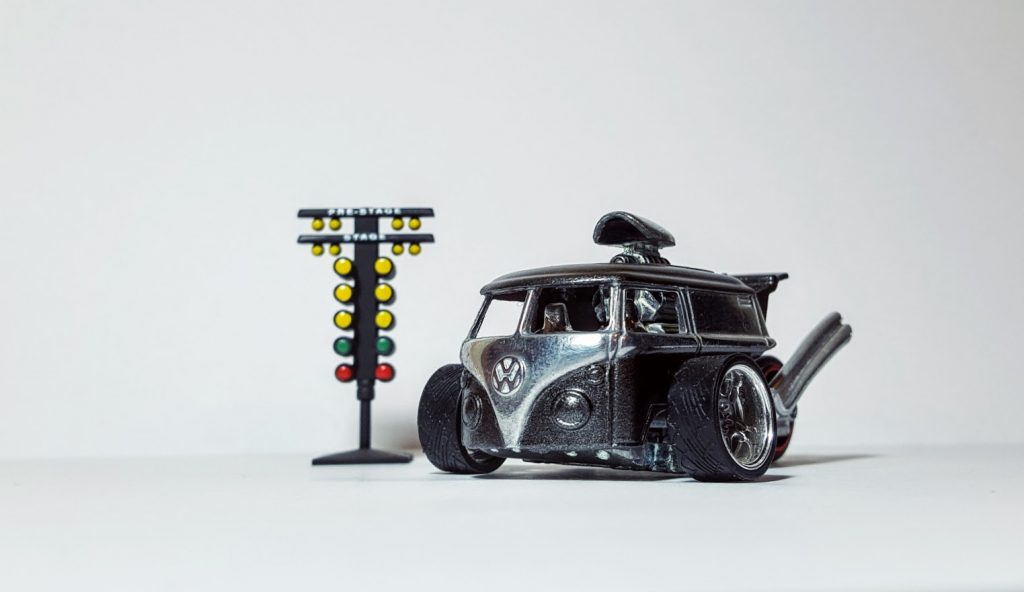 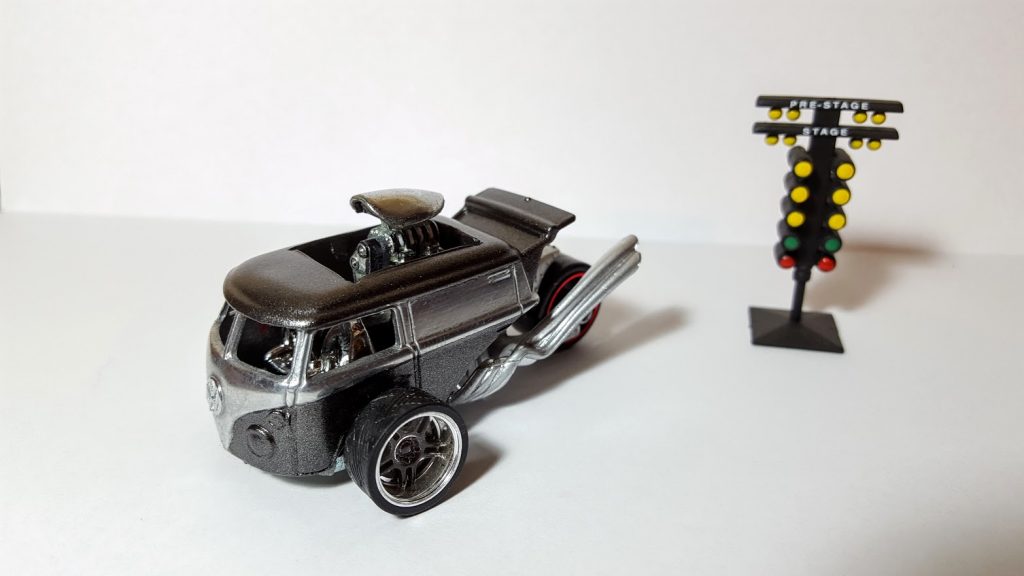 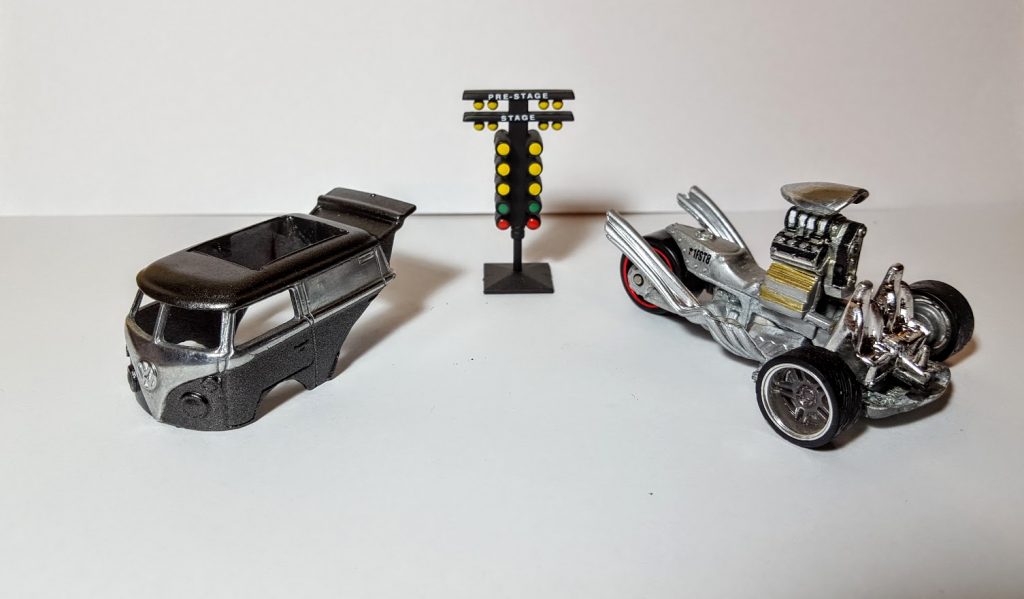 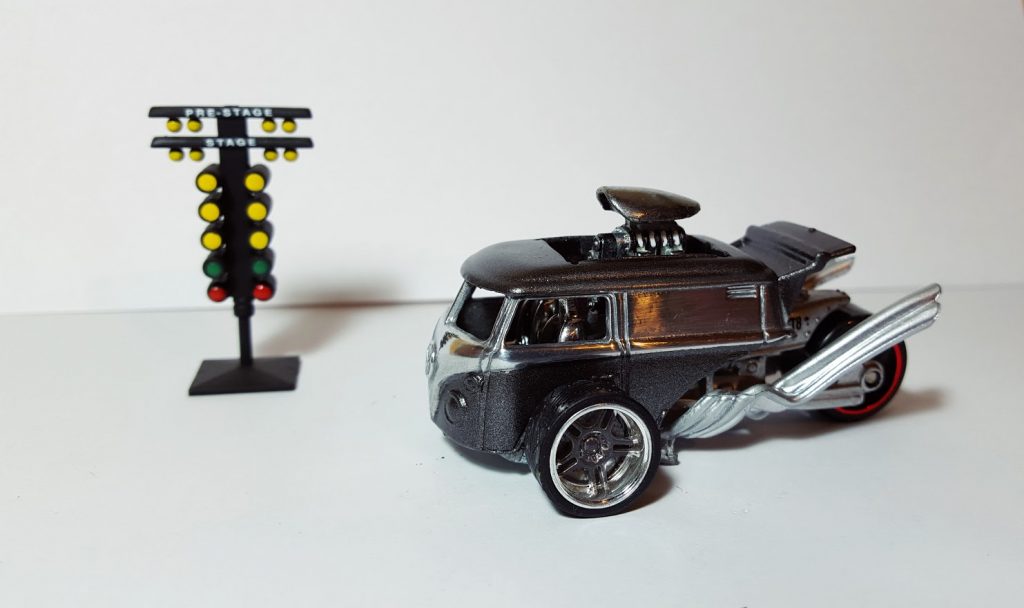 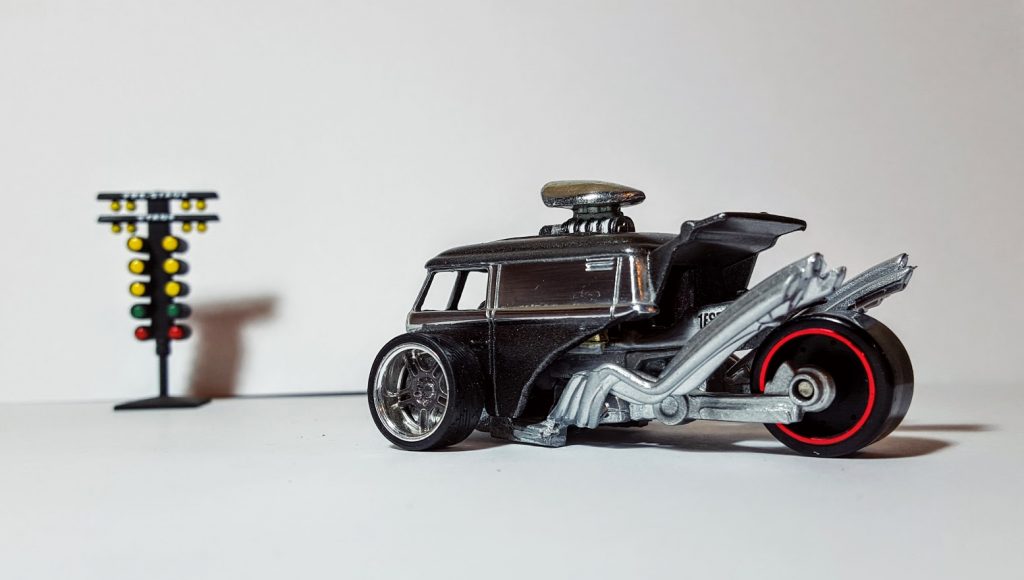 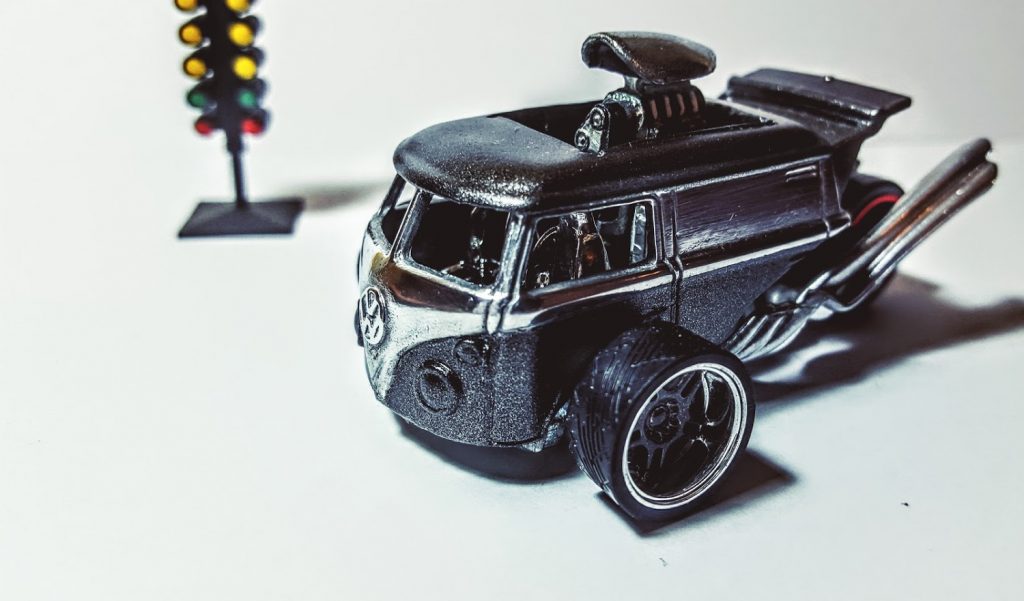 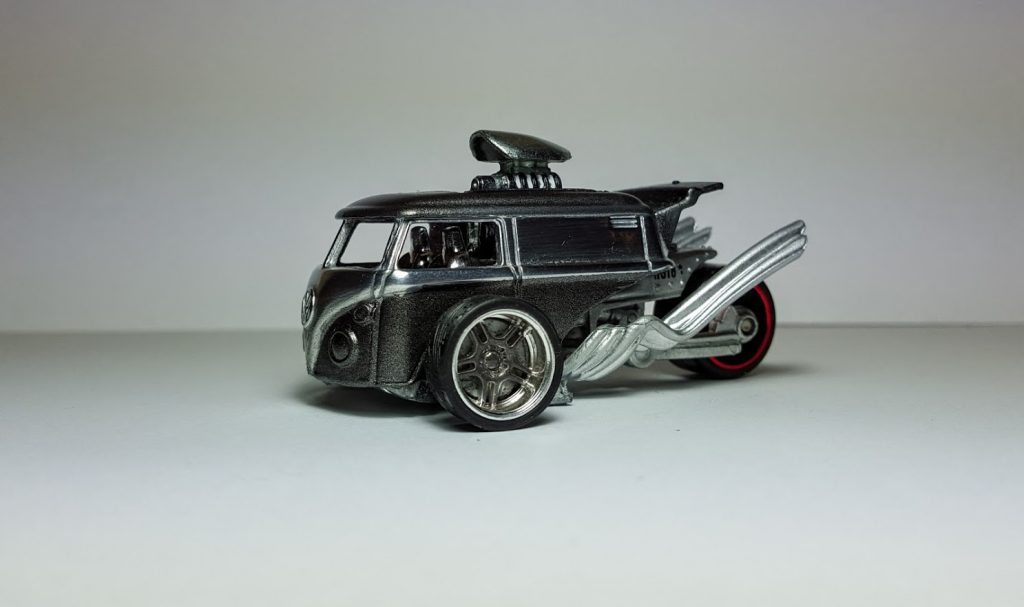 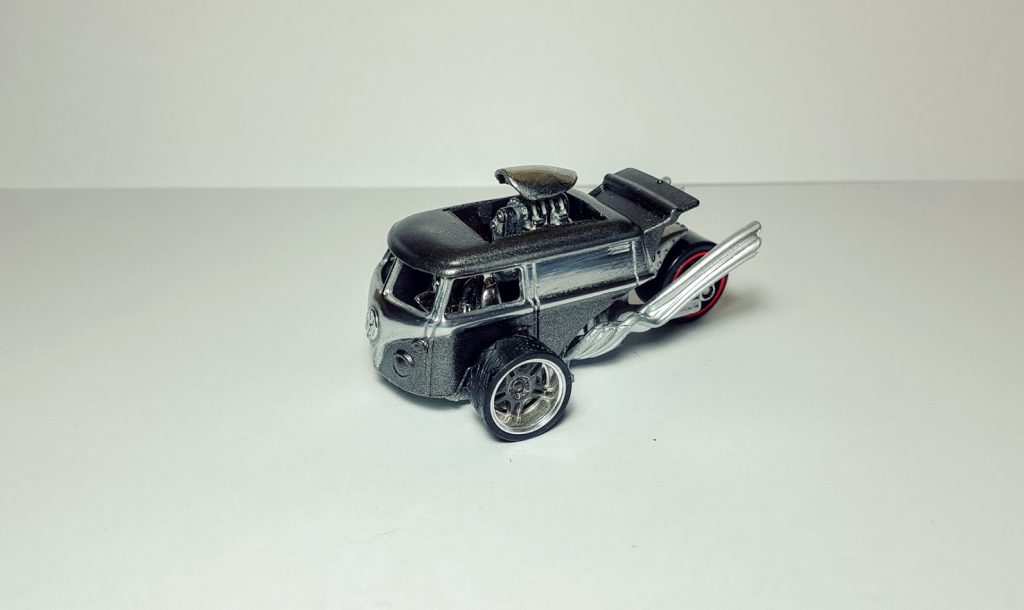 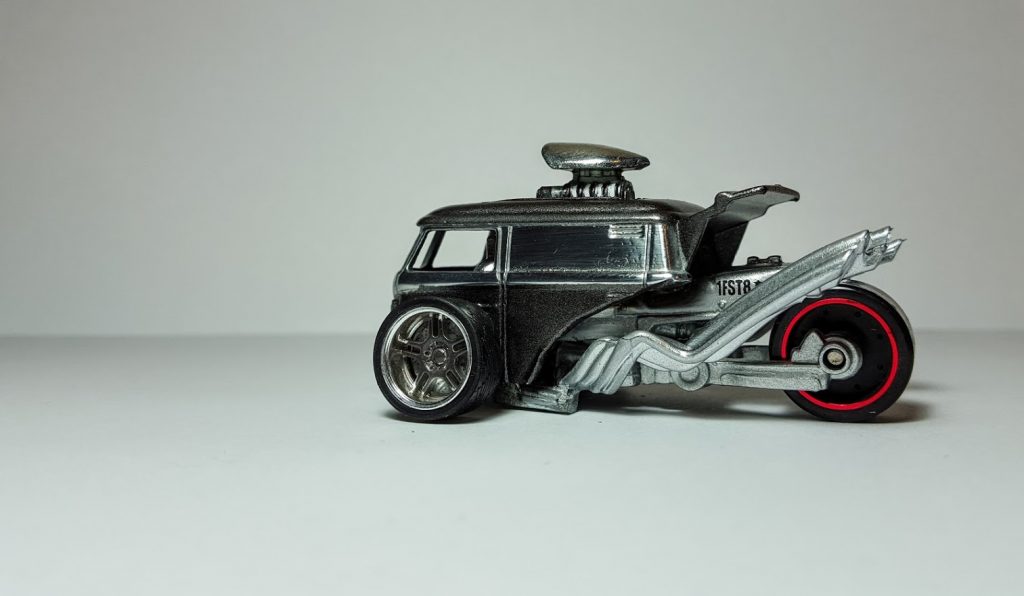 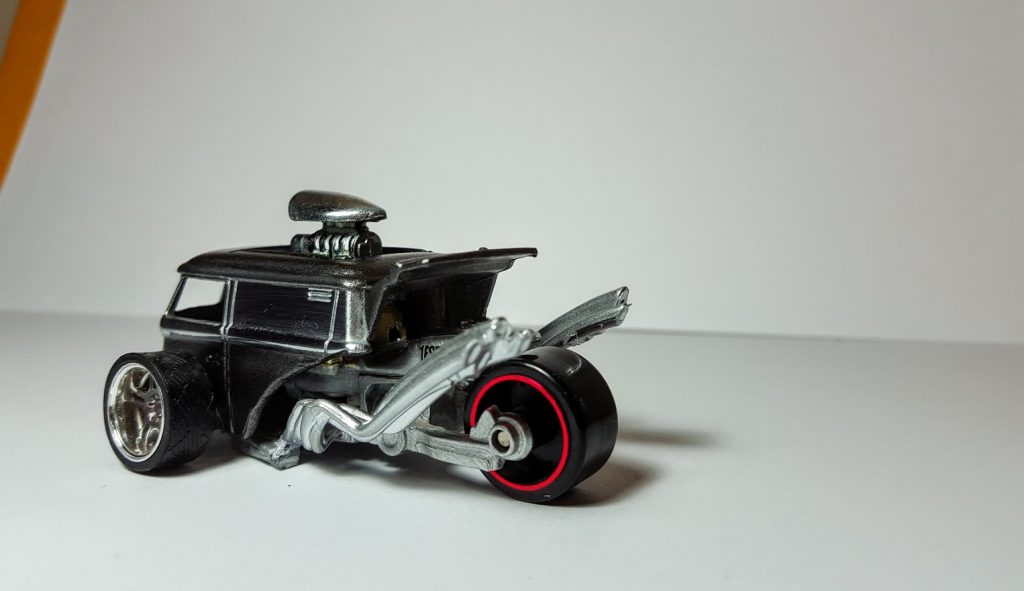 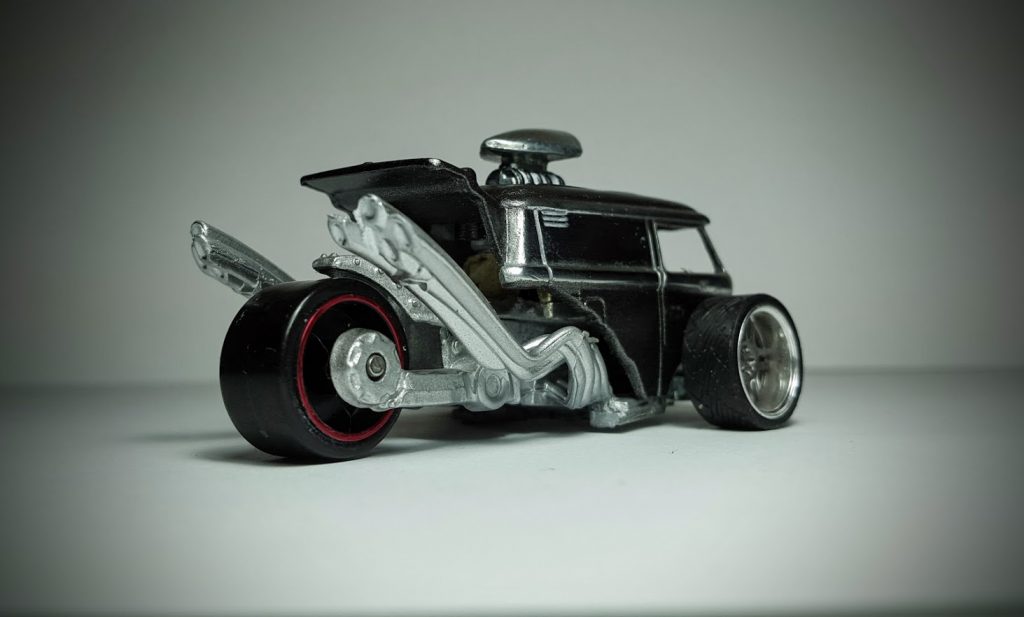 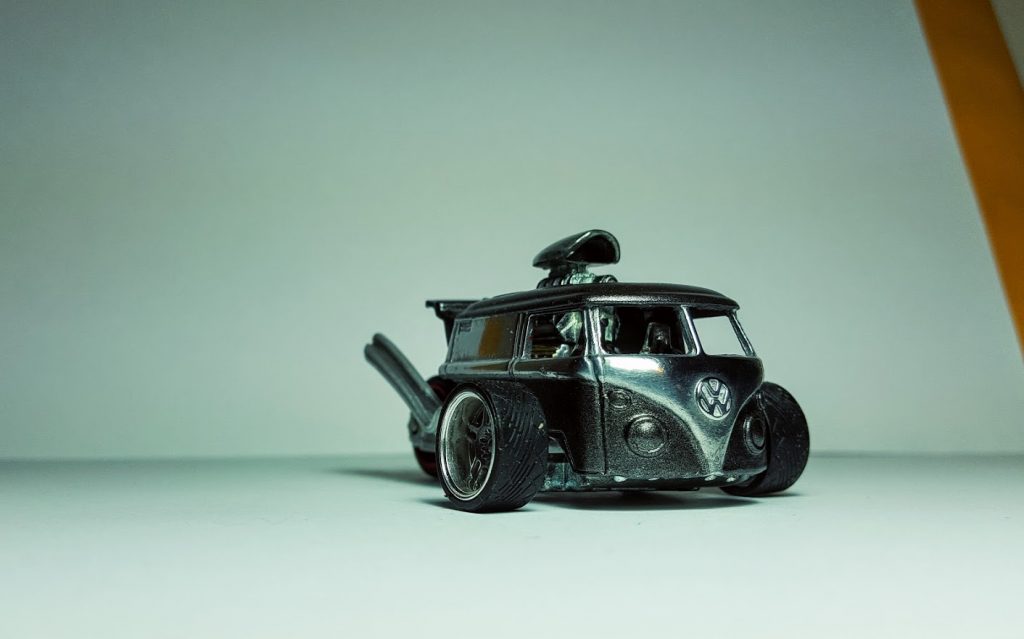 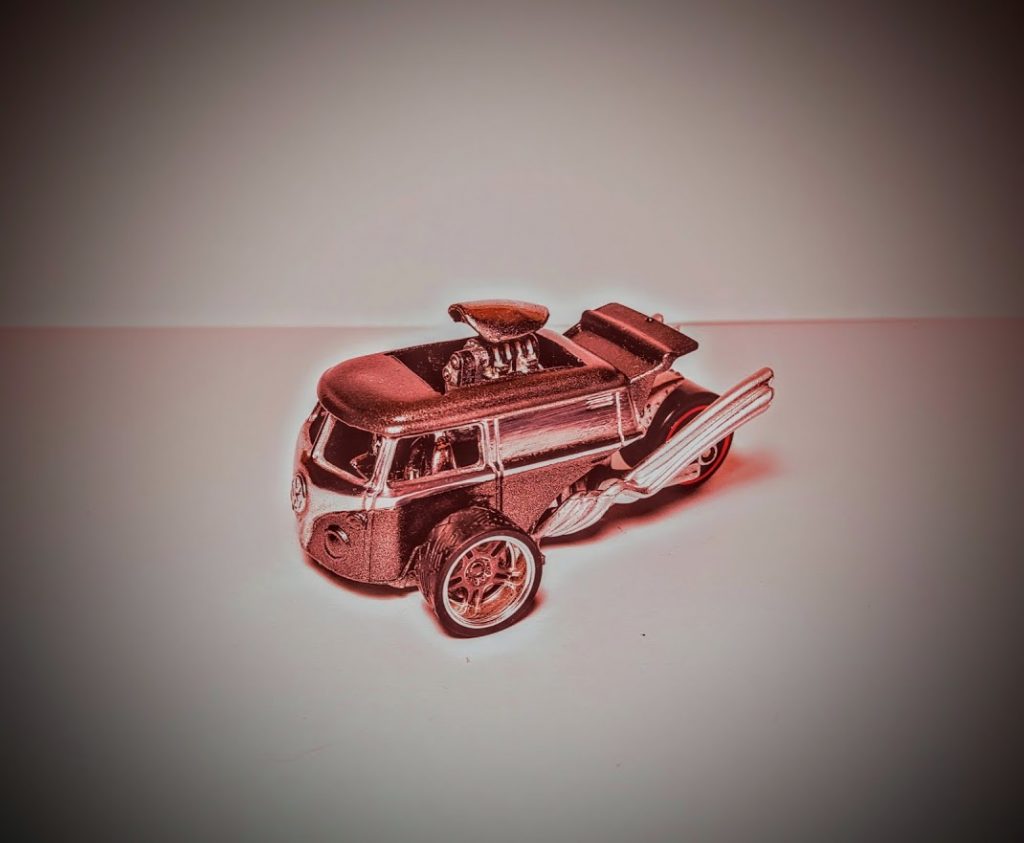 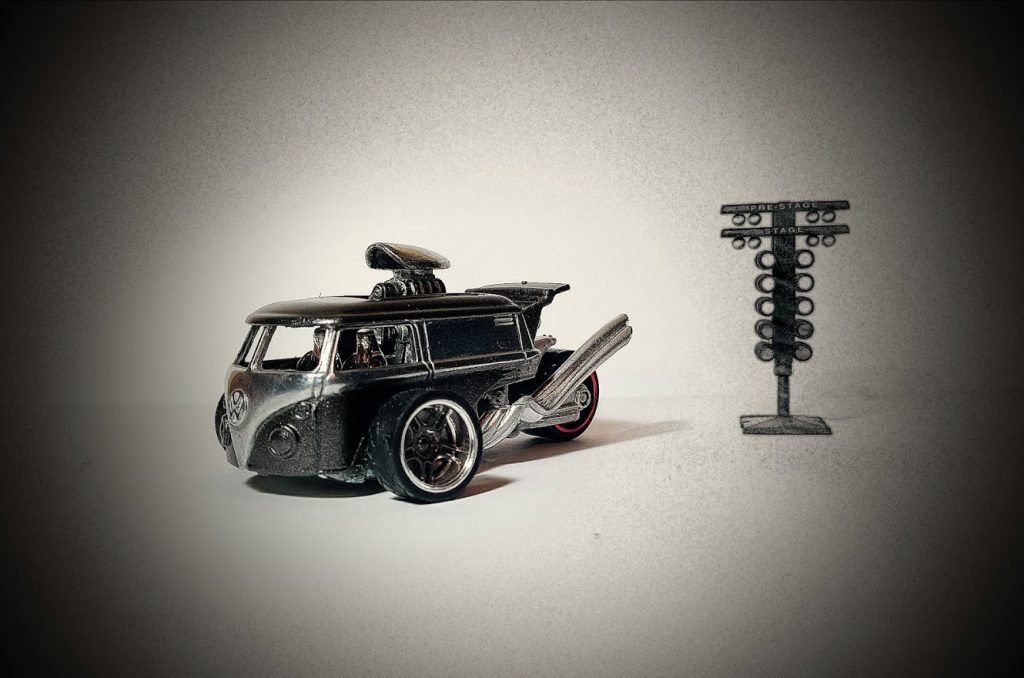 …And Then The Most Awesome Thing Happened!

I shared this build on Facebook after the competition was over (oh yeah, I totes won LOL) and went to sleep a contended man. When I woke the next day I was met with the most insane drawing of my custom by an incredibly talented artist – and lover of all things VW and split window related – by the name of Darrell Thompson. You can find Darrell on Instagram @Dazzlarock but if you want to see more of his awesome work or get him to draw your own personal ride (the 1:1 scale version I mean) then check out his Facebook page at Facebook.com/dazzlarock

This is the drawing that appeared in the comments thread of my post: 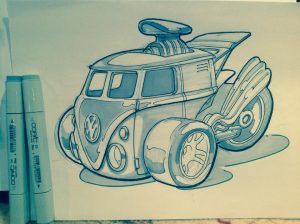 Darrell is taking this Random Act Of Kindness (RAOK) to new levels though as he has kindly offered to sign and send the original piece to me – even though I am on the other side of the world! I love this community of diecast collectors and customizers!

As you can see from the logo at the top I have added the text and optimised the image somewhat, but for the most part the drawing that Darrell has provided is pretty much my logo through and through.

What do you think?

Do you think this Logo is as badass as I think it is? Clearly I am bias so I thought it best to check 😉 – let me know in the comments below guys.