I was going to spell Customs with a ‘K’ so as to complete the alliteration of the title but upon closer inspection it occurred to me that the acronym created by such a title would be, well let’s just move on shall we. 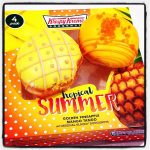 We (well I) recently teamed up with Krispy Kreme Australia to help promote a range of new doughnuts being released for the Summer and the resulting creations were quite delicious if you’ll excuse the pun – and my clear lack of modesty.

But like any good tale it’s best served with a back story and of course should always start at the beginning.

Savvy Marketing and an A-100

I had just released a new Krispy Kreme & Assorted Donut Pack in my Online Decal Store and wanted to advertise them with something unique and eye catching, and what started as a small marketing vehicle (excuse the pun) soon turned into a much larger advertising platform than I could have possibly imagined…

The offer I (but mostly my stomach) couldn’t refuse

A few days after sharing the images of my custom Dodge A-100 on Instagram and Facebook I received an email from Jack at Krispy Kreme Australia asking if I would be interested in partnering with them for an upcoming promotion. I won’t go into the details but I will tell you this much – part of the offer involved free Krispy Kreme Doughnuts and well, the rest is history. … just like the afore mentioned doughnuts 😀

So I went about making some customs…

I won’t go into details with the build as the finished products speak for themselves. Besides, apart from painting, detailing and adding custom decals there was not really all that much to these 3 builds.

After consulting with Jack at Krispy Kreme I decided on a trio of customs to mark the occasion. One vehicle for each of the 2 new doughnuts being released for the Australian Summer and a Maisto Flatbed Hauler (and trailer) to tow them around to the various shows and Krispy Kreme 1:64 scale store openings. 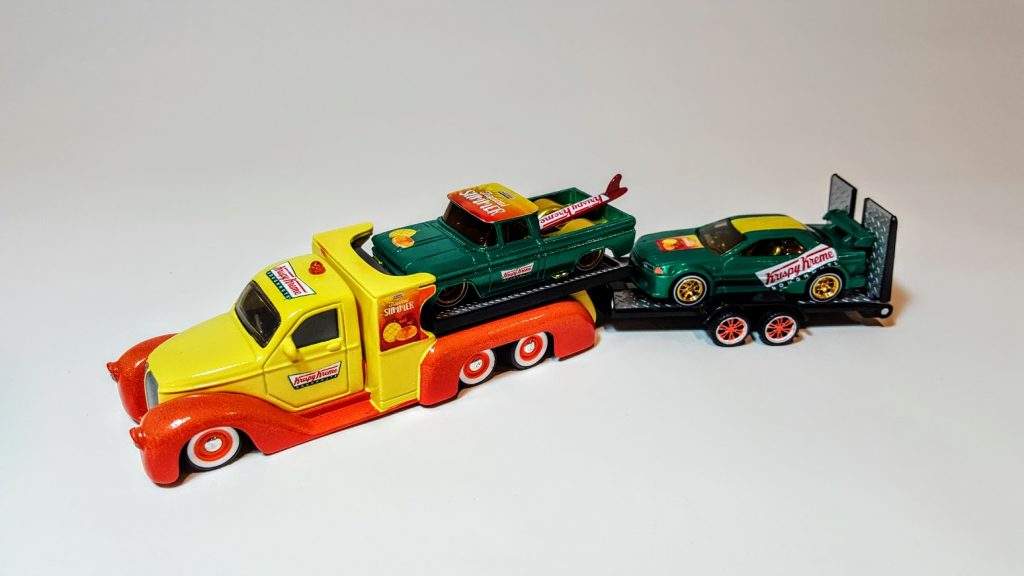 Again I won’t bore you with the details – I’ll let the following images do that for you* … *the aaah details bit I mean, NOT the bore part. 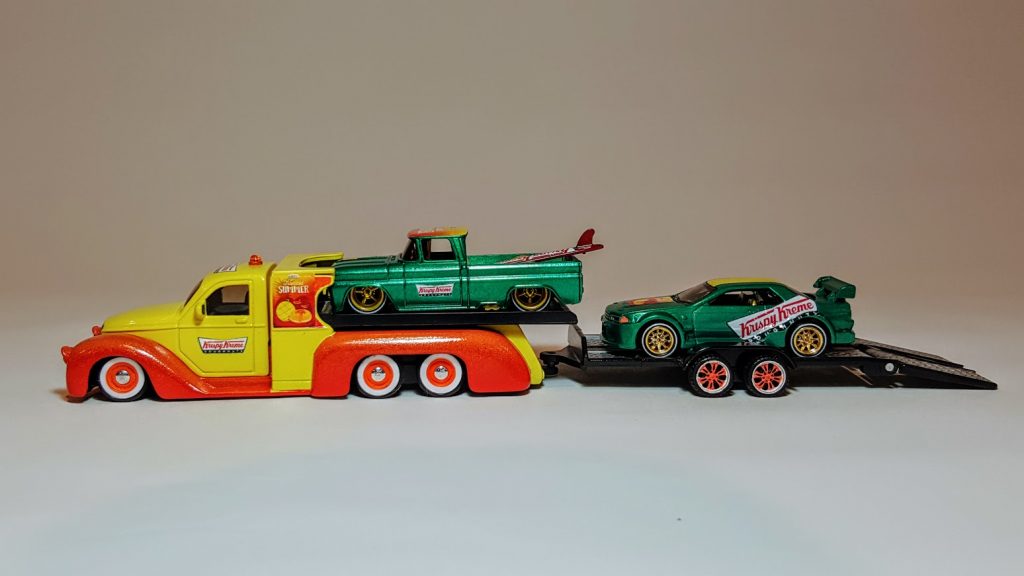 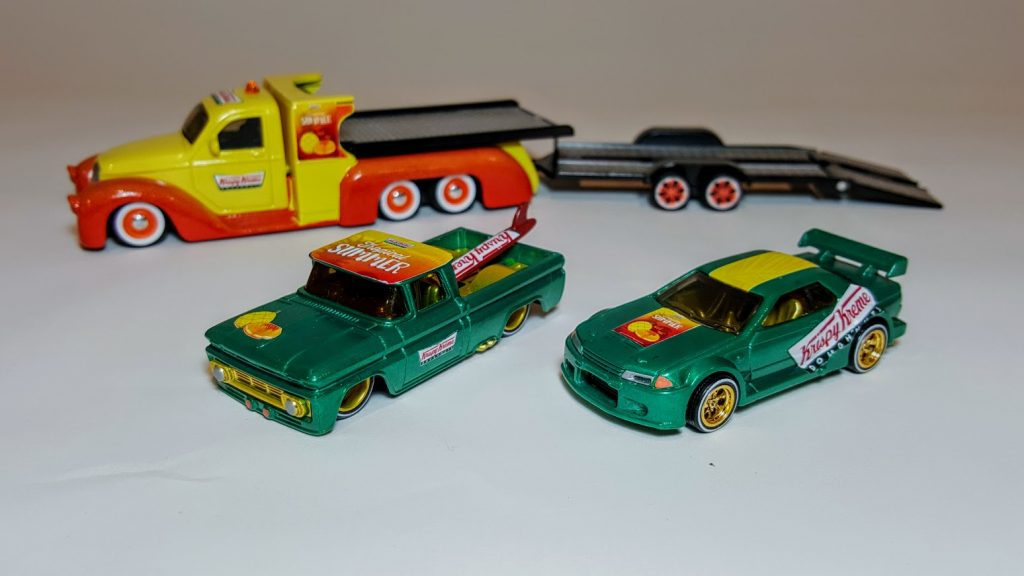 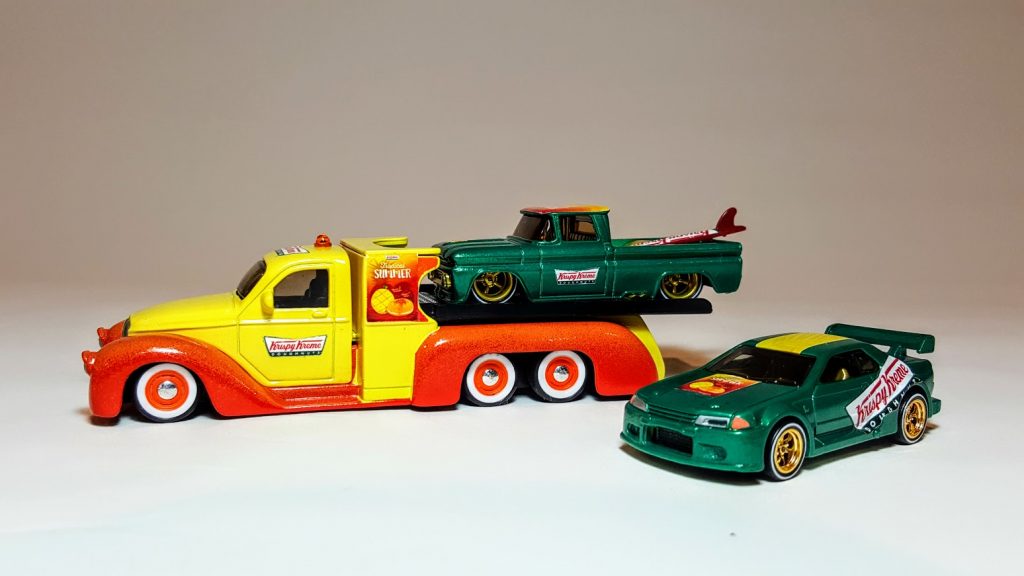 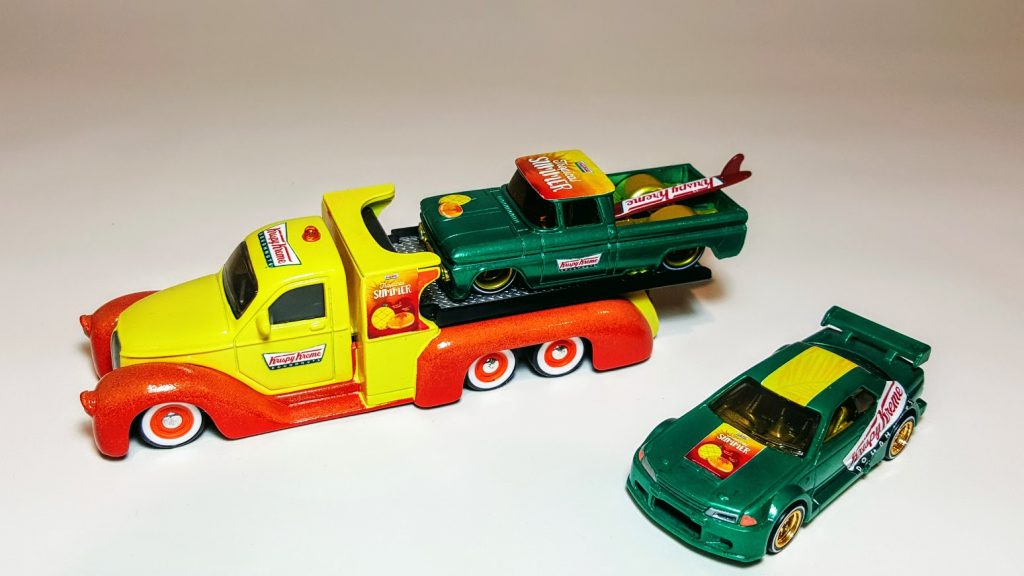 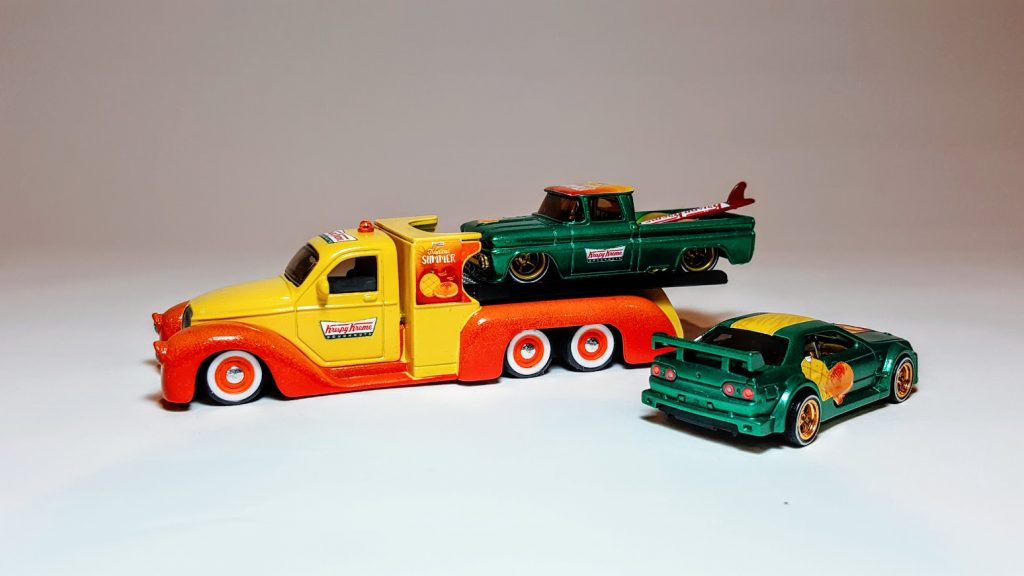 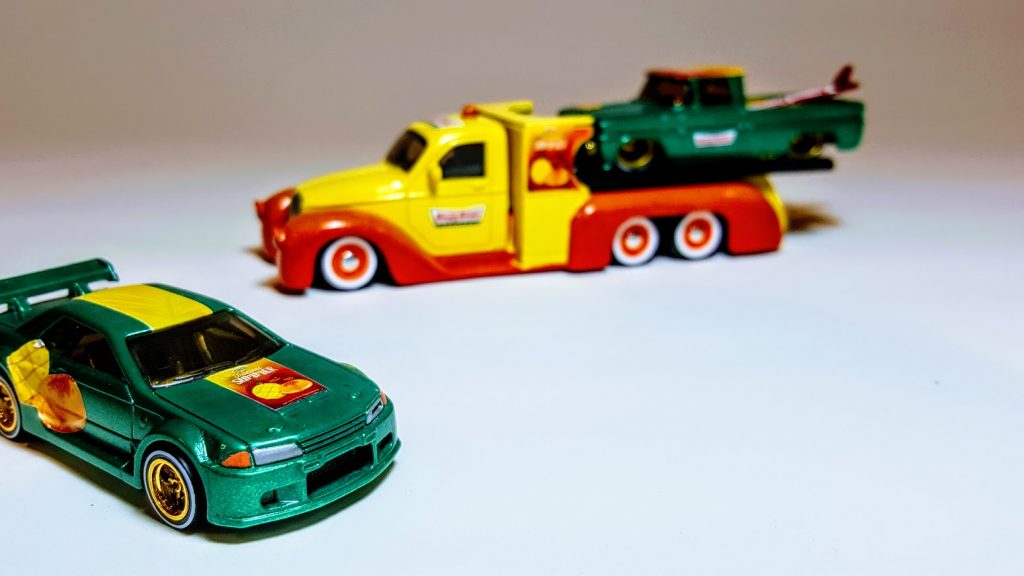 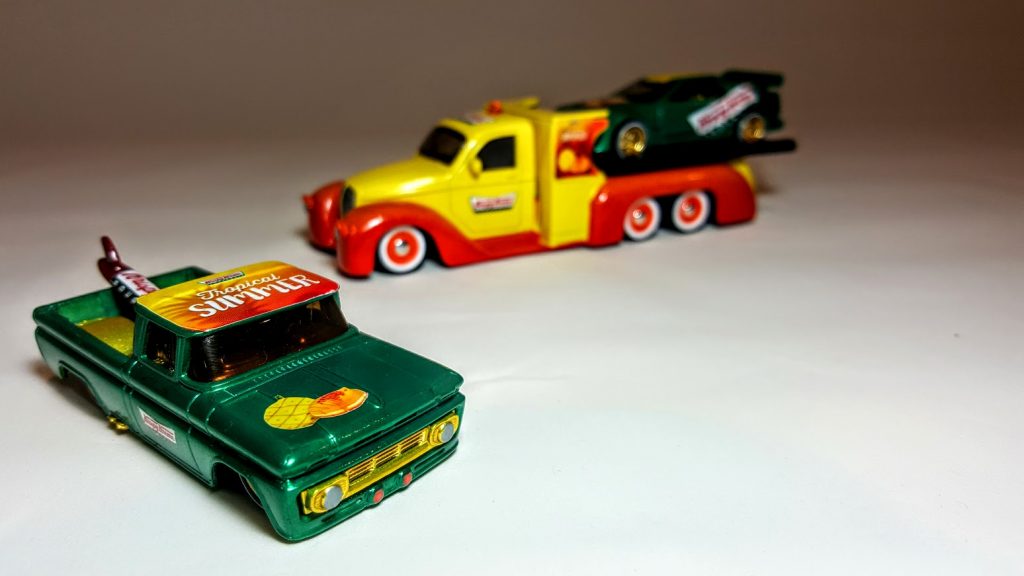 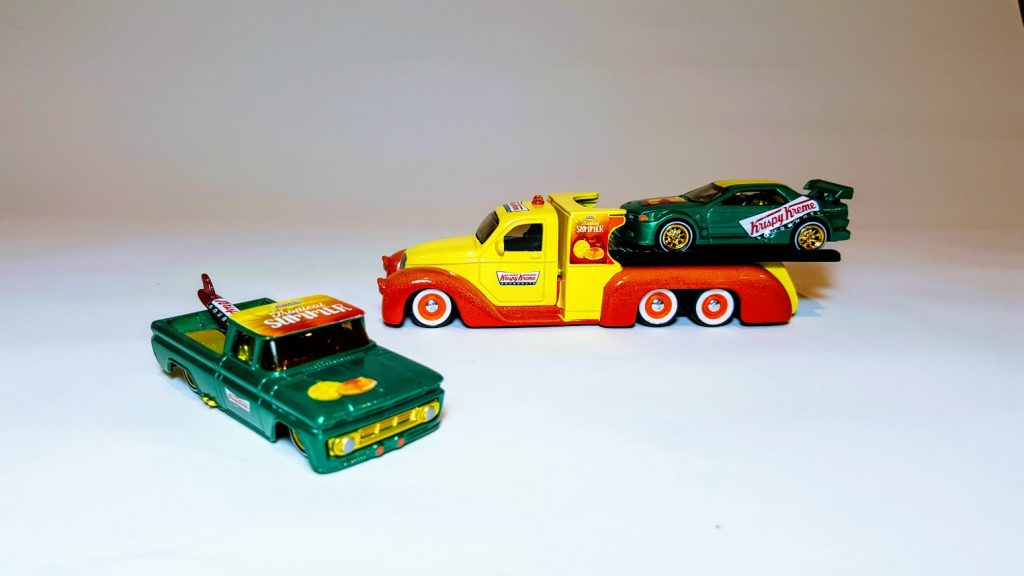 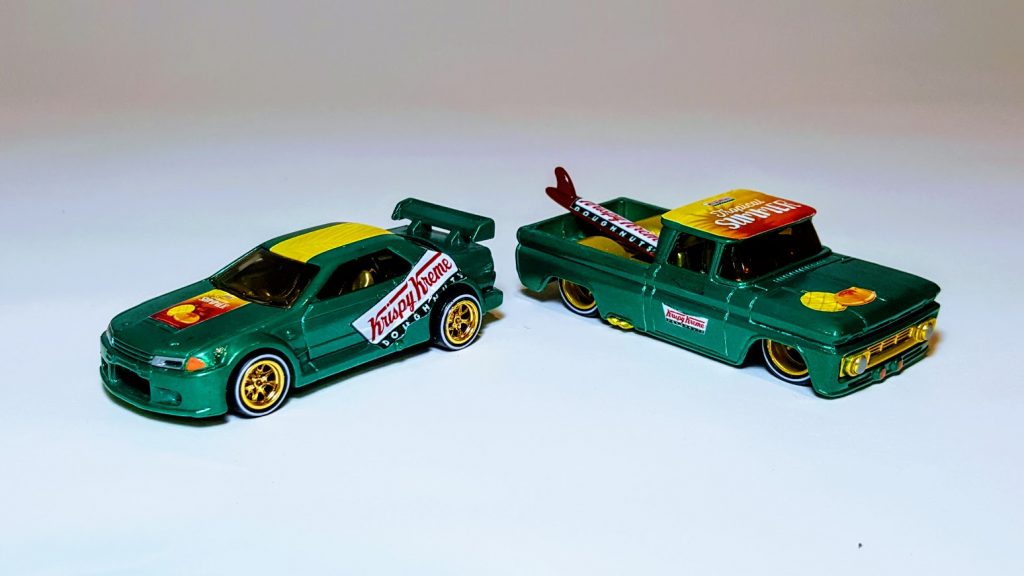 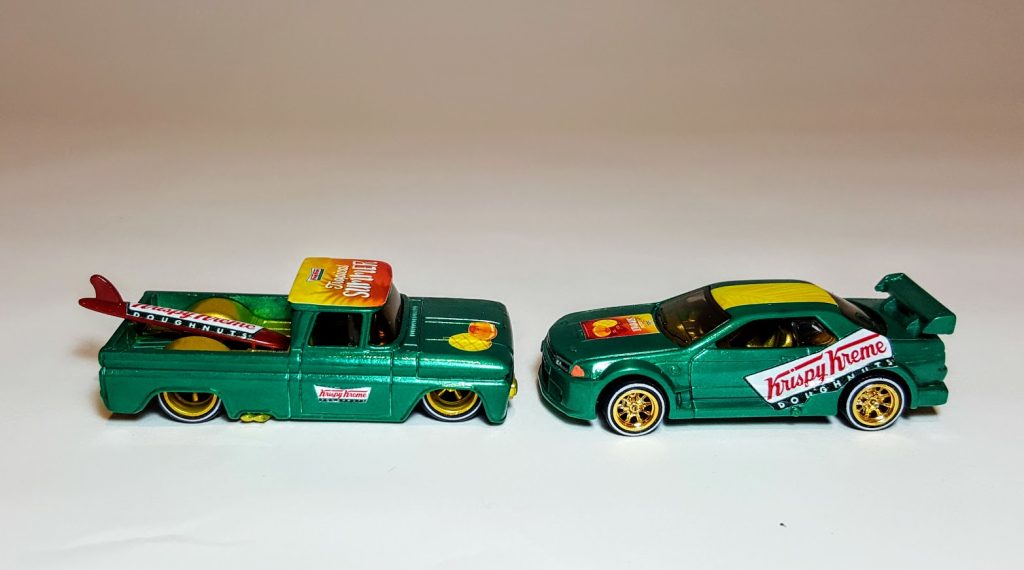 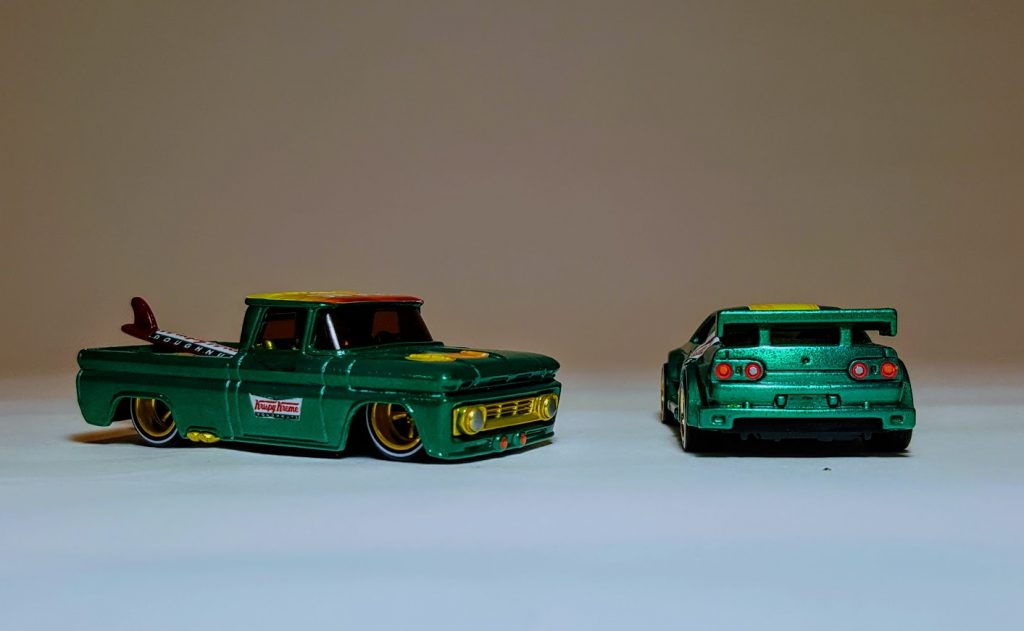 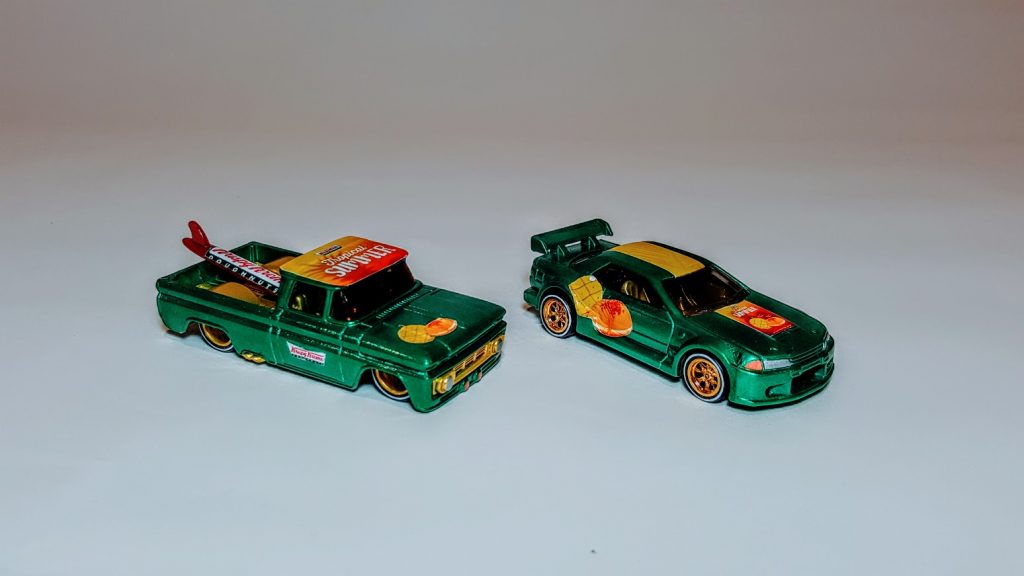 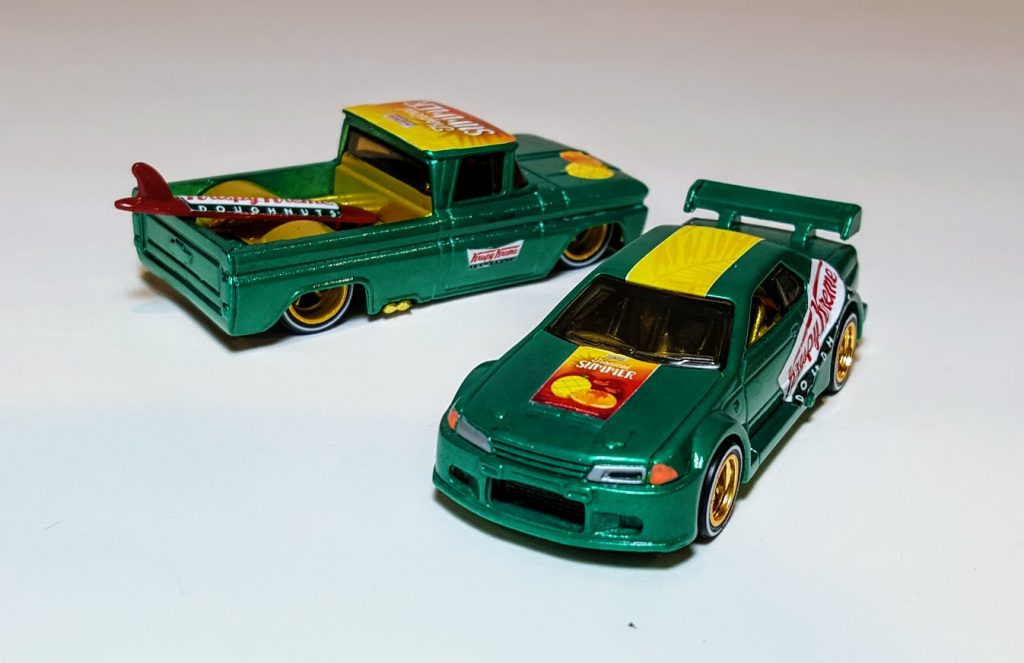 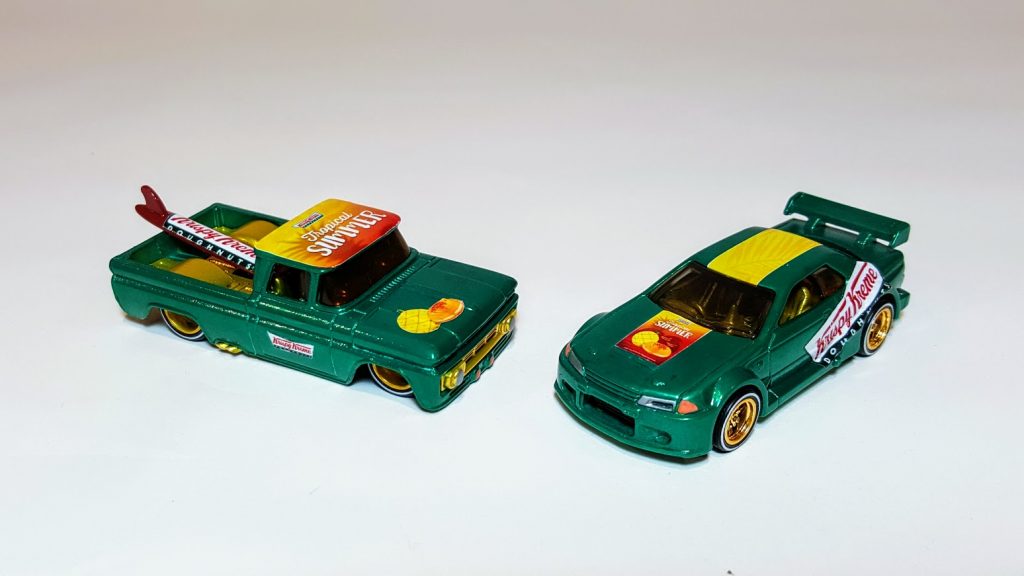 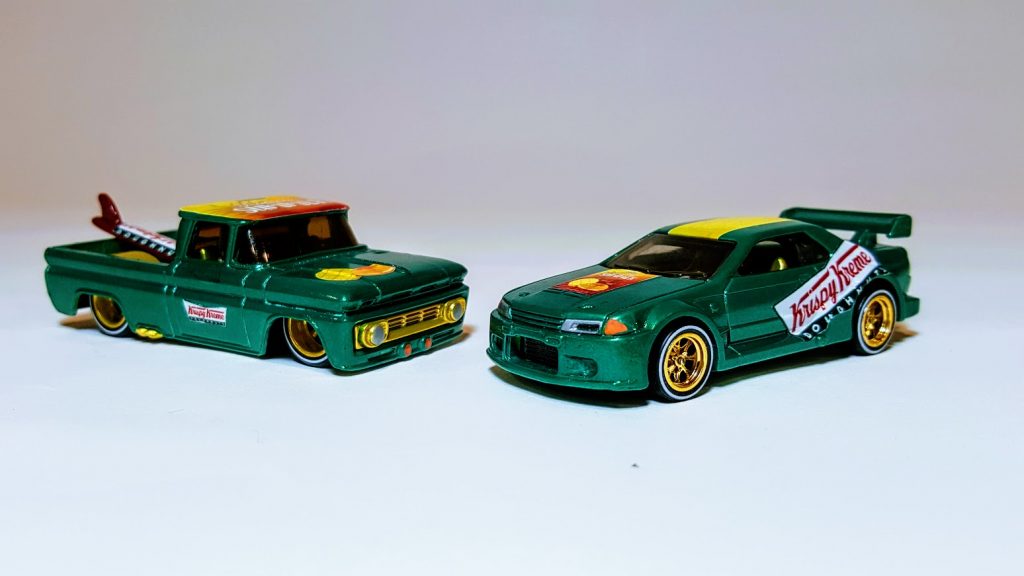 Some Close-Ups of the Maisto Transporter Turned Krispy Kreme Hauler 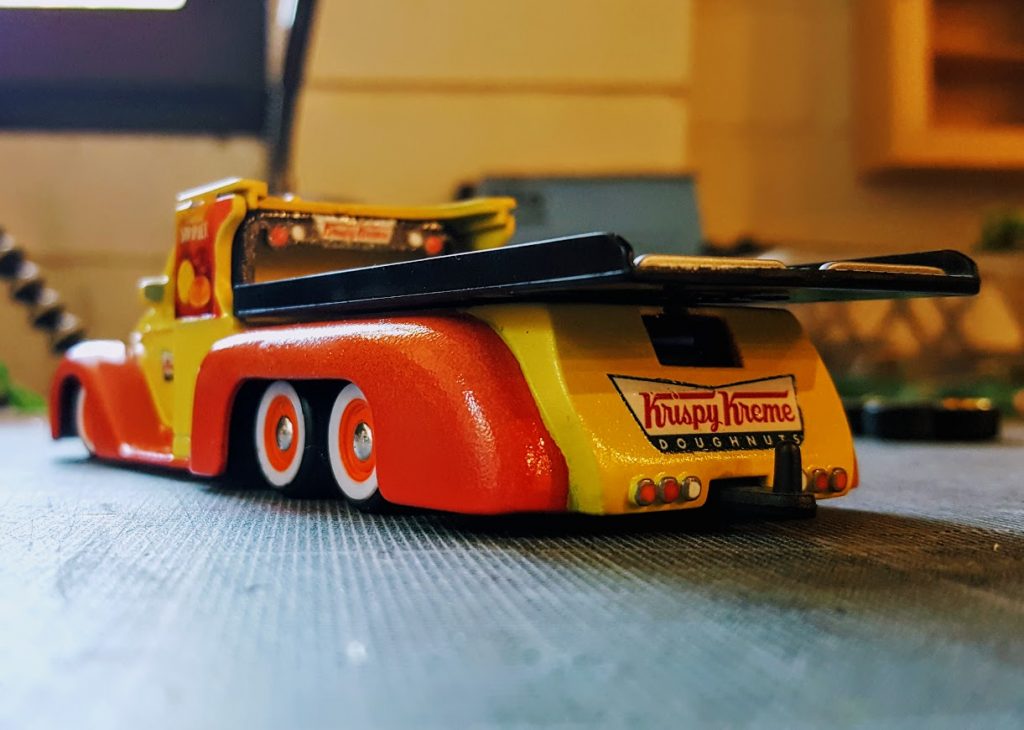 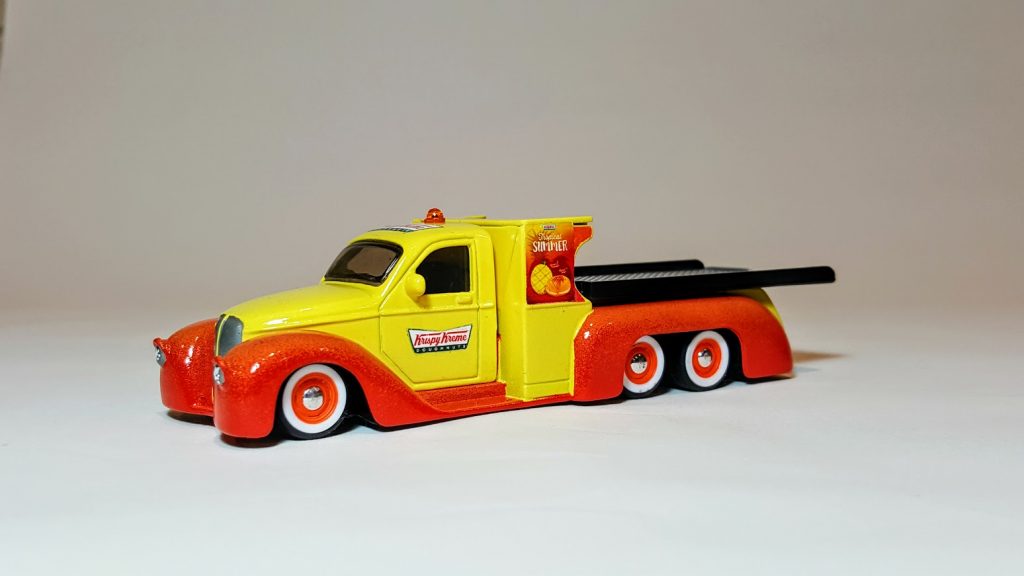 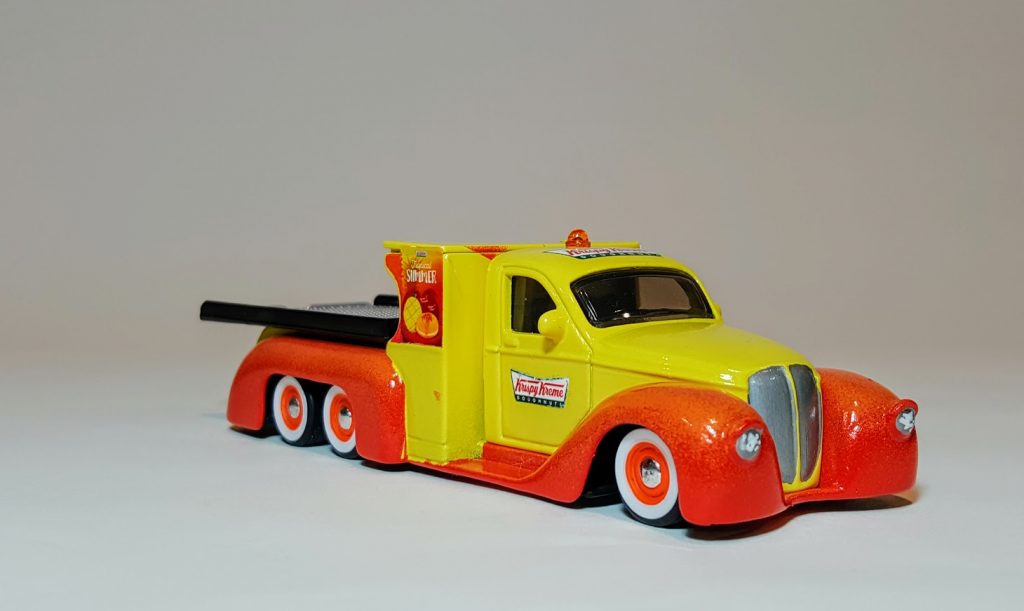 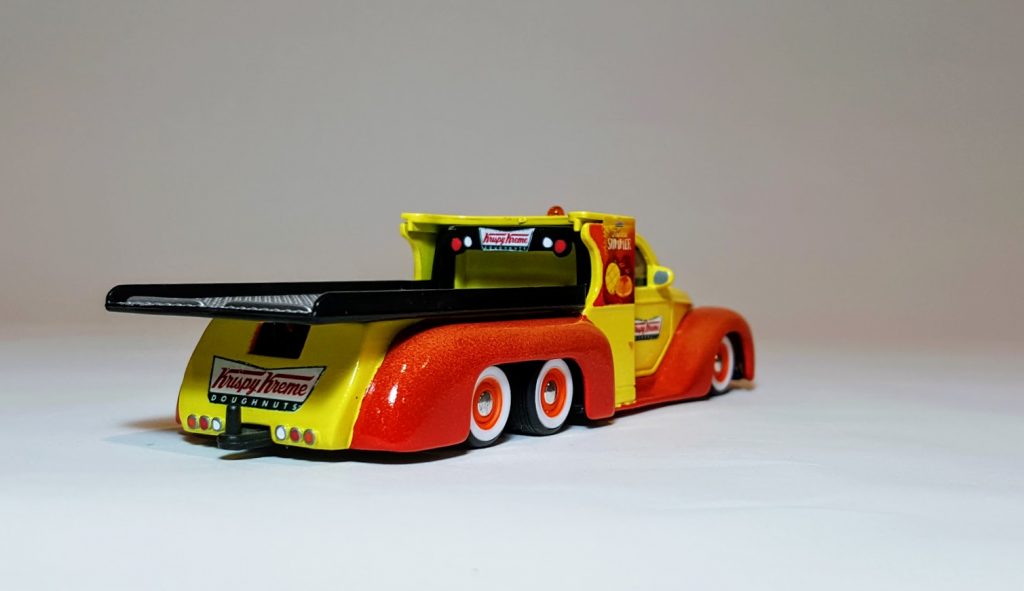 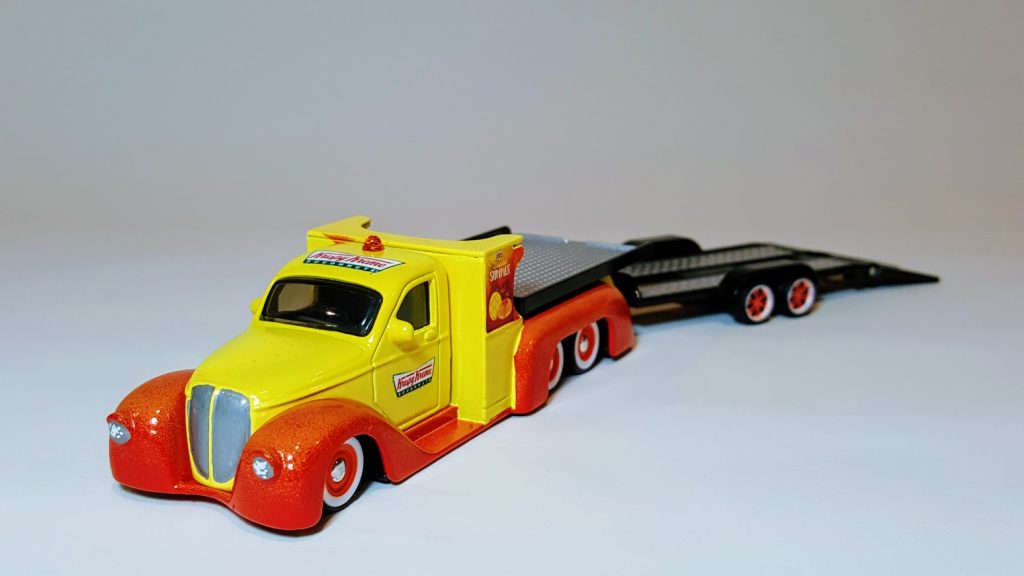 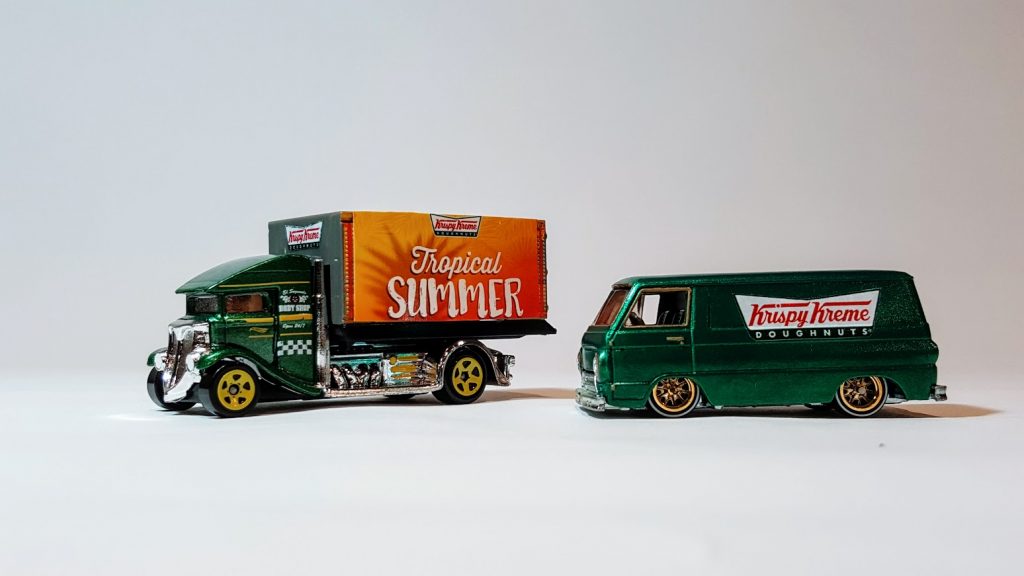 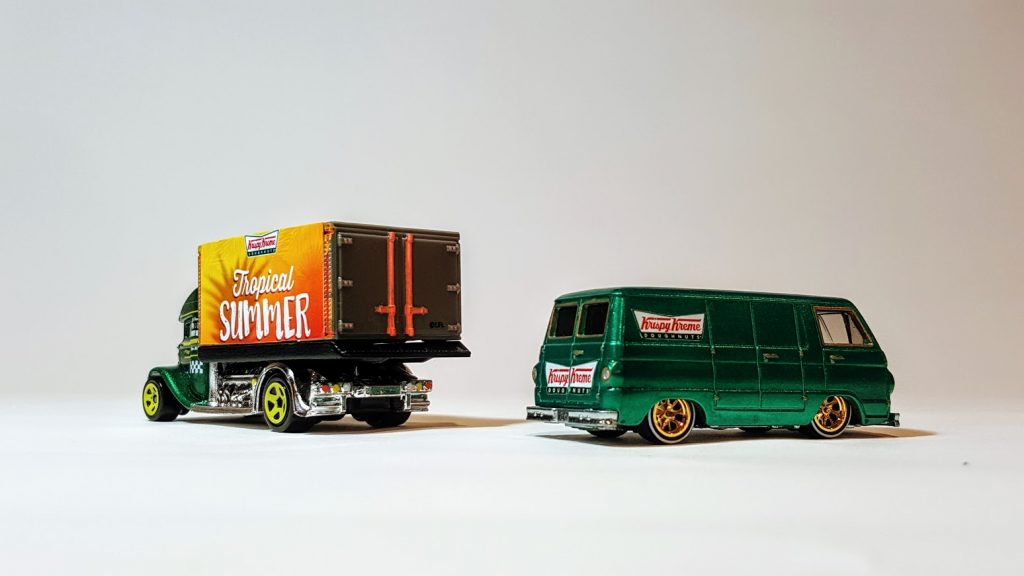 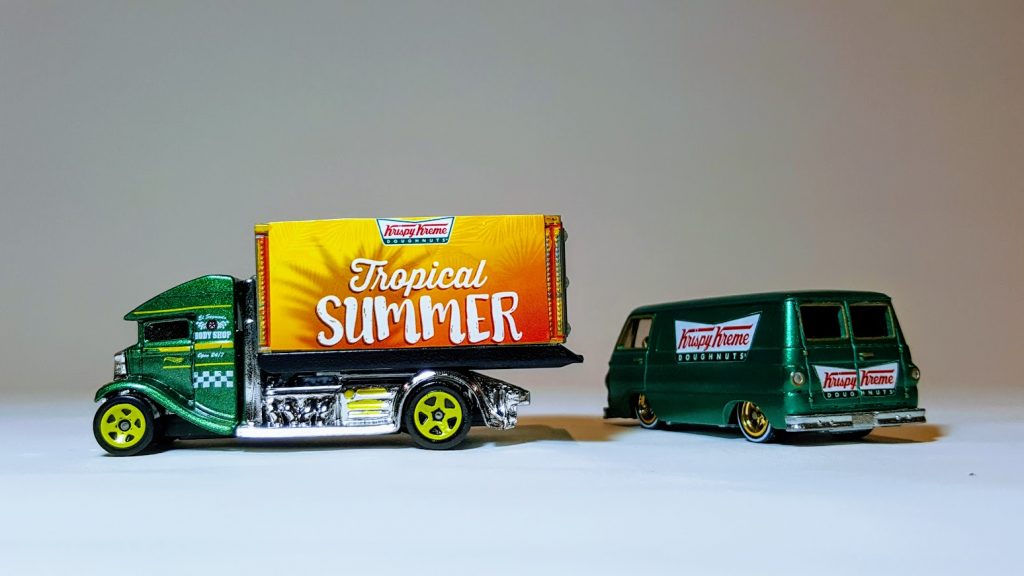 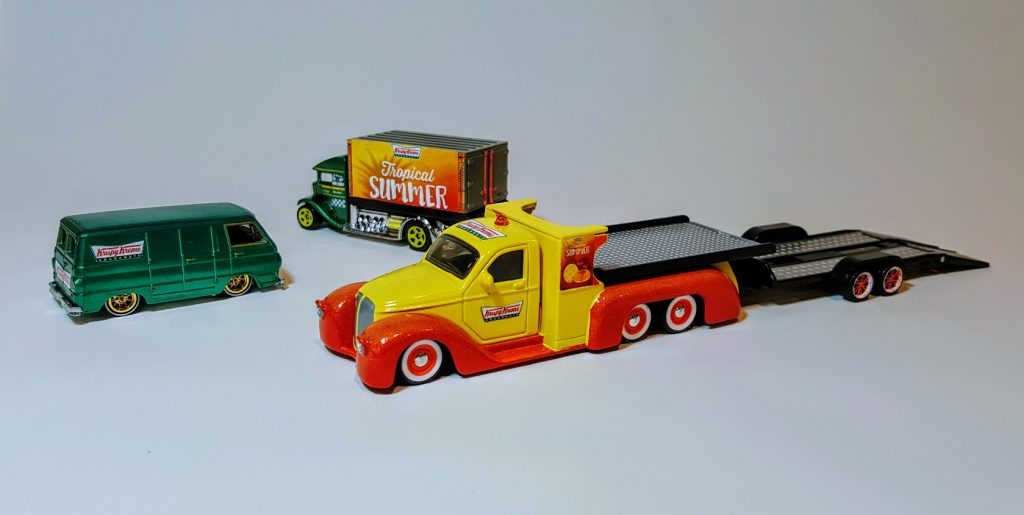