Merry Christmas From My Custom Hotwheels 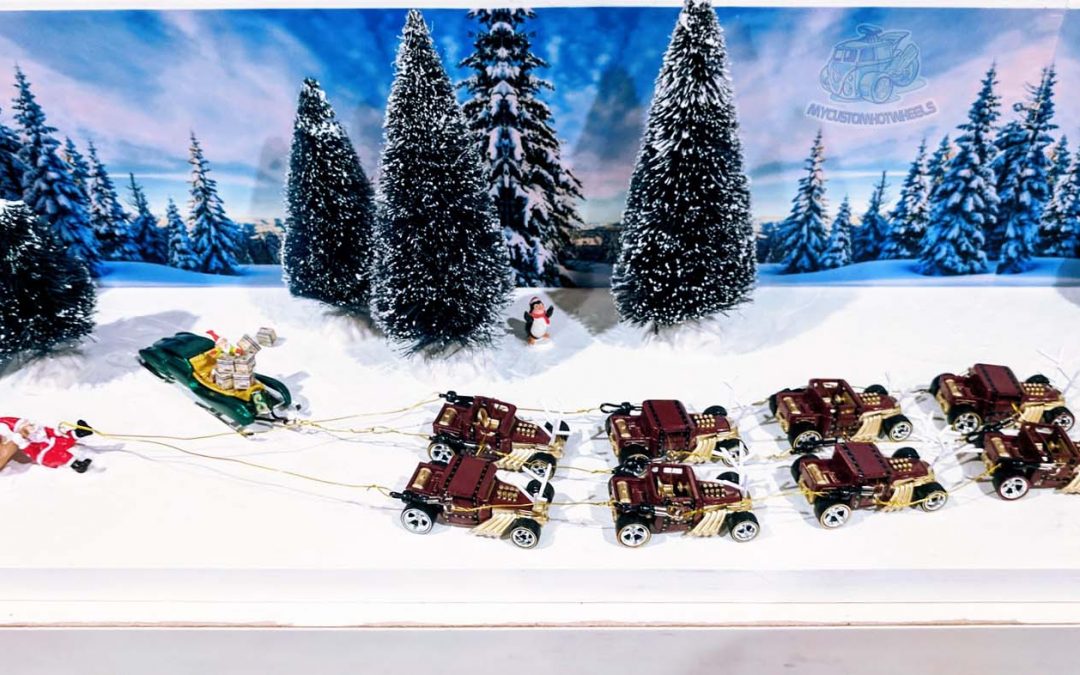 I know it’s slightly belated but it’s still 2017 so technically if I throw in a “& a happy New Year” after the usual Merry what-have-you’s I’m OK. Therefore ignore the previous comment about being slightly behind schedule and move along, nothing more to see here folks. Oh wait! There’s heaps to see – and it begins with a little Christmas custom I created to celebrate this most festive of seasons 😀

The above image shows just how insanely Christmassy things get around our house – ahem, for the kids and all you know. 😉

8 Boneshaker Reindeer and a Ratrod without an Engine (or Wheels)

Essentially that is what it is – and truth be told it was what entered my head the second I decided to create a Christmas themed custom in 1:64 scale. The Boneshaker is a classic Hotwheels design and a favourite among collectors and customisers (myself included) and was an easy choice when deciding what car was going to substitute the reindeer and provide Santa with the power required to get around the world in one night. It was also an easy choice because I have like a thousand of them lying around – so finding 8 was definitely NOT an issue.

The Sleigh build was smooth and seamless and the only real issue I had was the conundrum I faced when looking at the finished lines and extended wheel arches. Damn this would make a badass rat rod with big engine and sitting lower than roadkill. But alas I was commited and had to abandon that idea in order for Santa to have somewhere to sit*
*I wasn’t to know that the uncoordinated bastard would fall out of the sleigh now was I?! 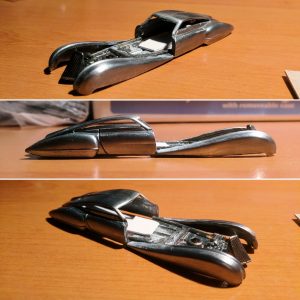 The above Work In Progress shots show what I am talking about with regards to the lines created. For those playing along at home this was made from the back two thirds of a ….that twin engined casting (name evades me sorry) and the front wheel arches are from the Screamliner. Note that the chrome undercarriage of the Screamliner was also cut up and used to make the skids of the sleigh itself – which is why the curves of both front and back sets lend themselves so well to the sleigh above 😉

And then add a little candy…green that is – I had always pictured this being green not red. Not sure why – maybe because I knew I was painting the cabin part gold and the two colours go so well… or maybe not. I have no idea why I do half the things I do so let’s just move on before someone gets hurt.

It’s All Fun & Games Until Santa Falls Out of His Sleigh!

So after painstakingly putting the diorama and custom pieces together and then spending 3 delicate hours harnessing up the boneshakers (and breaking off three sets of antlers in the process GRRRR) I look back to find that not only has Santa managed to fall clean out of the sleigh, but the elf in charge of the new 2018 Cases has clearly had too much Christmas spirit and has let 1, no 2 cases fall from the sleigh!… I mean honestly, you take your eyes off the little ones for 5 seconds?!

So without further ado, I present to you the My Custom Hotwheels 2017 Christmas Custom and Diorama. Enjoy 🙂 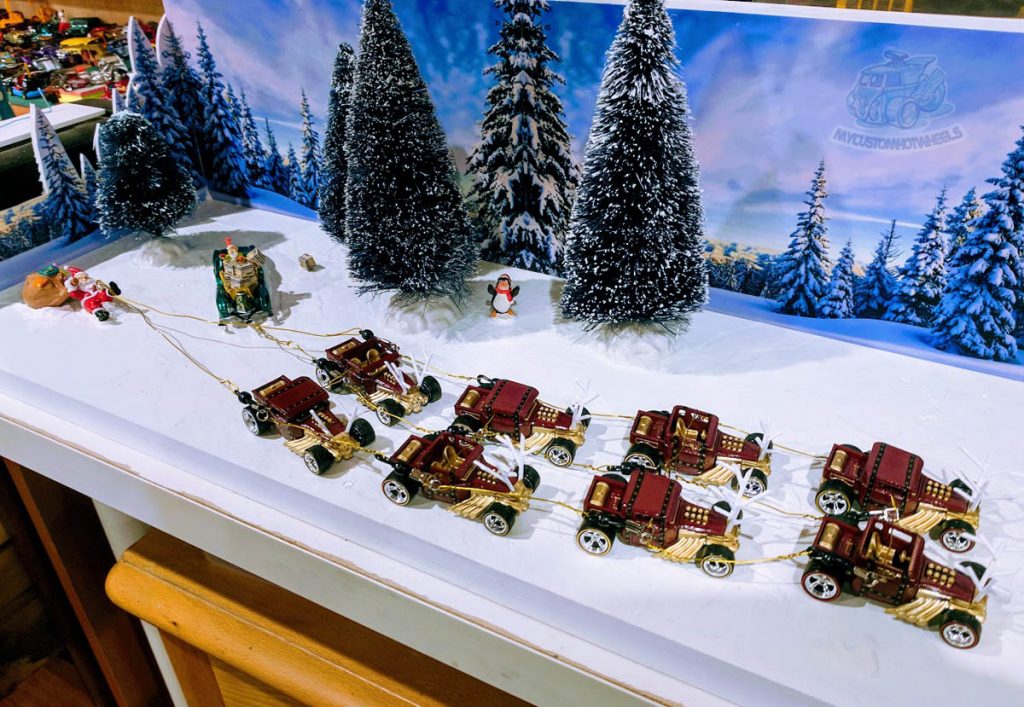 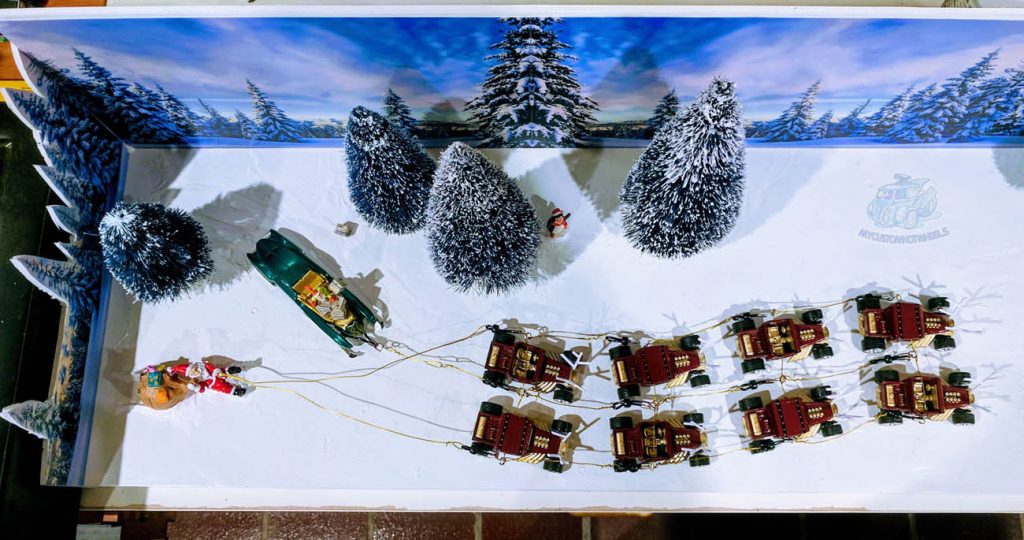 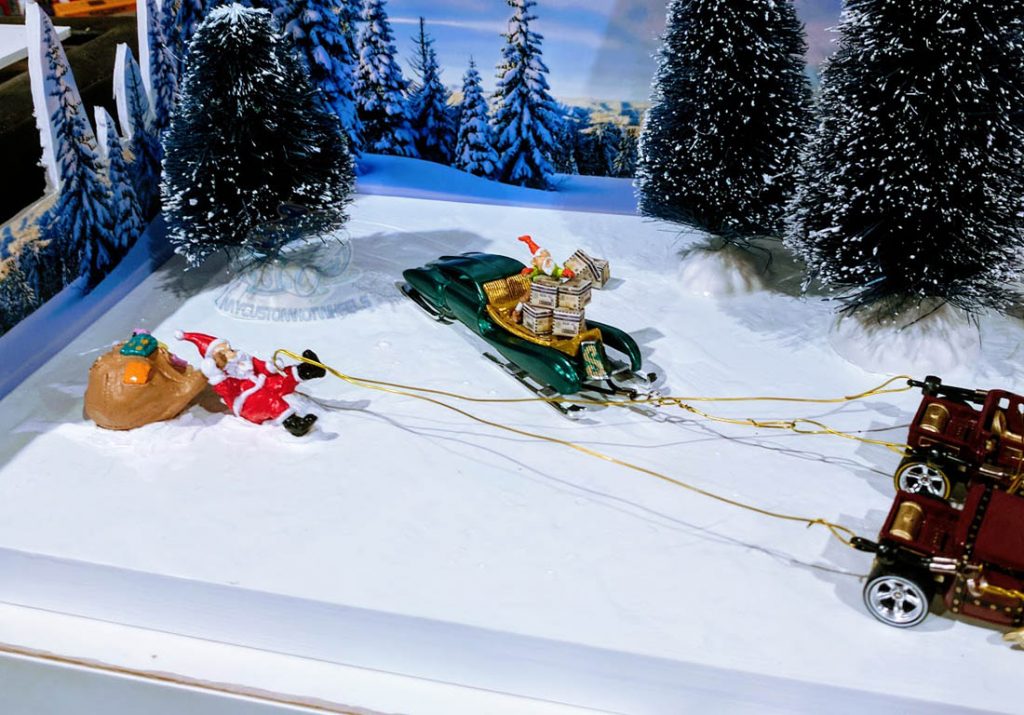 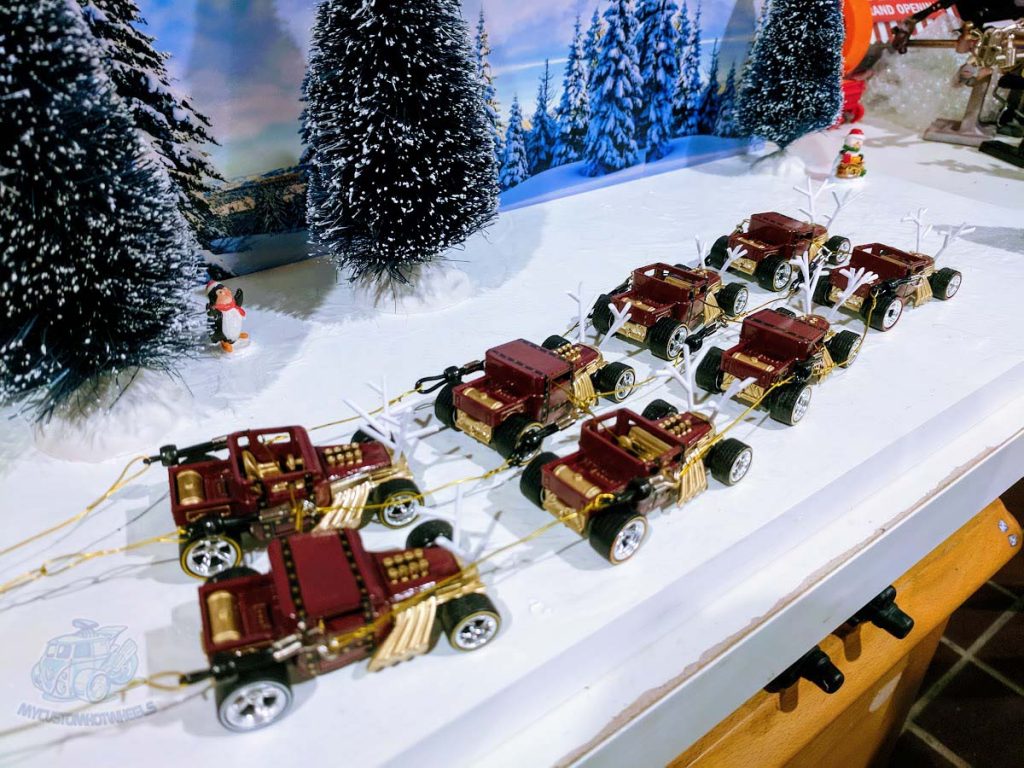 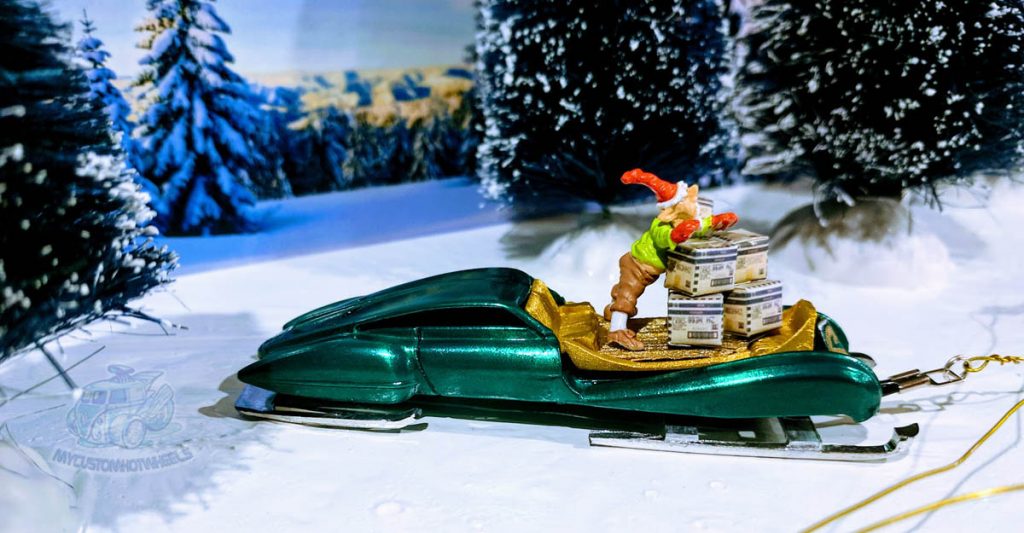 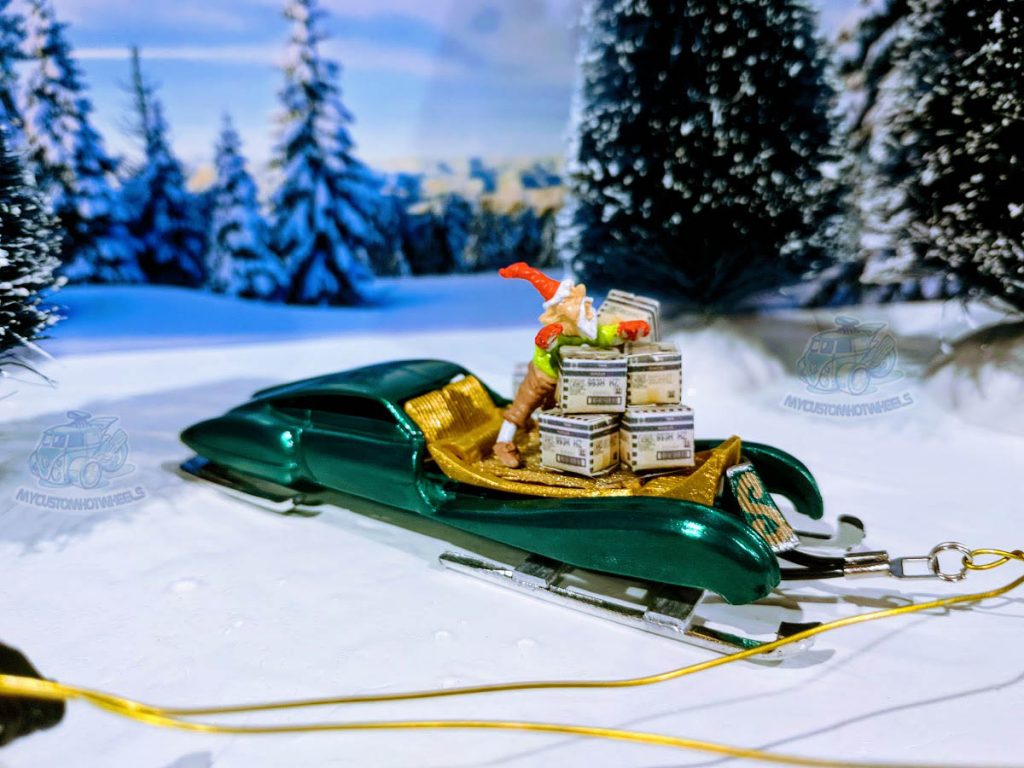 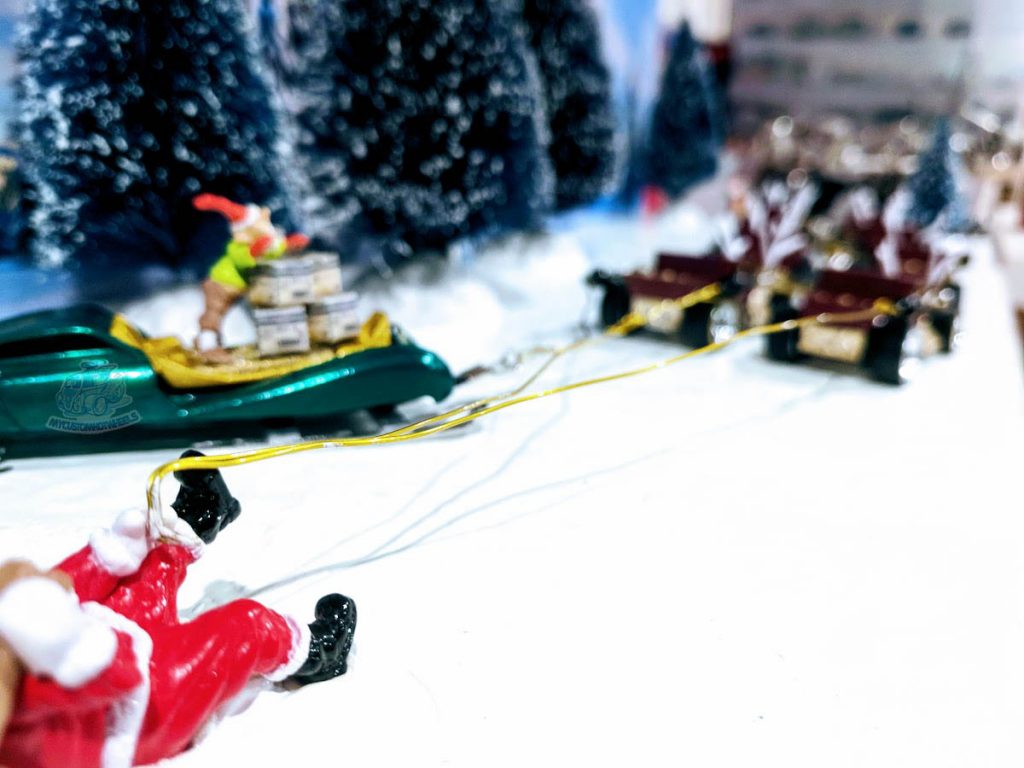 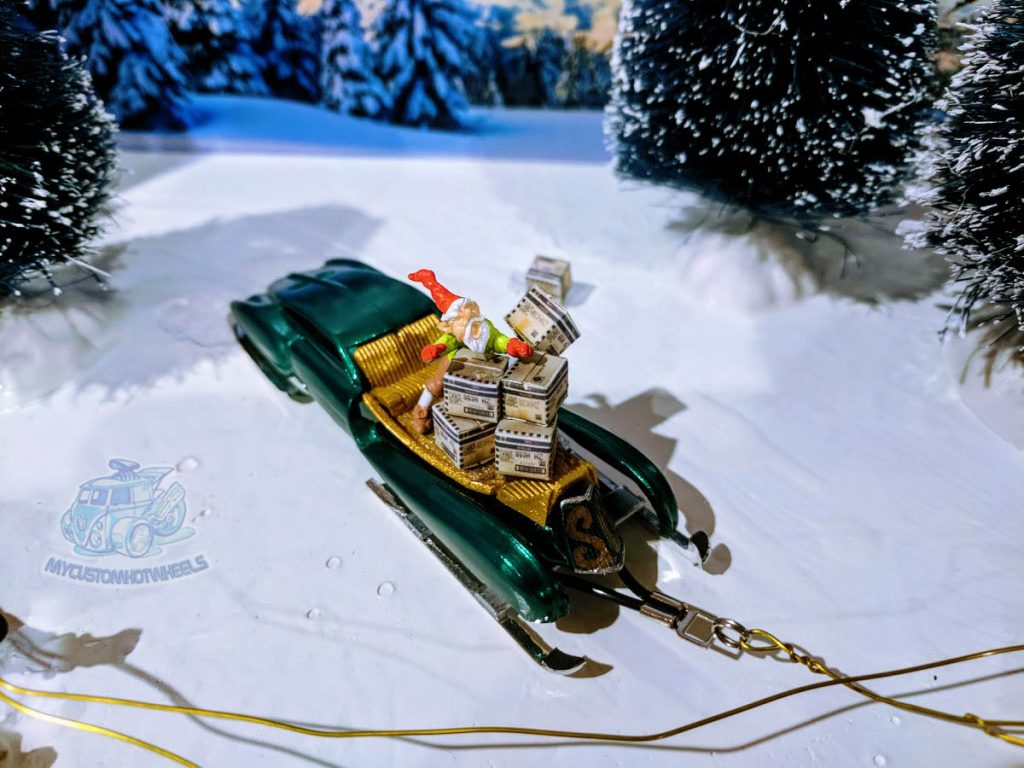 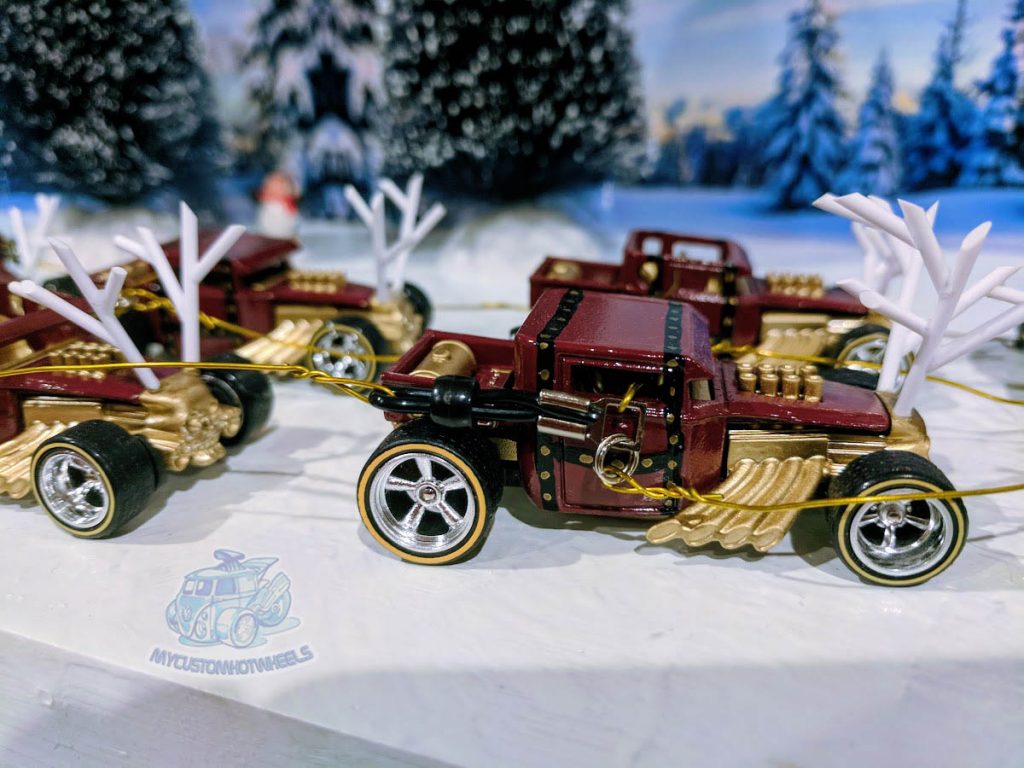 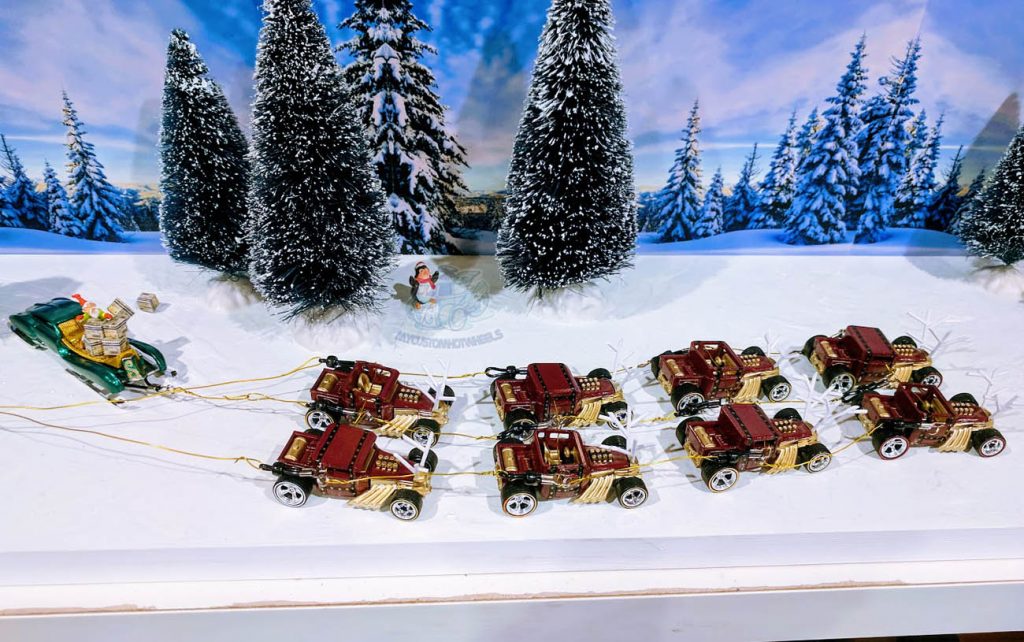 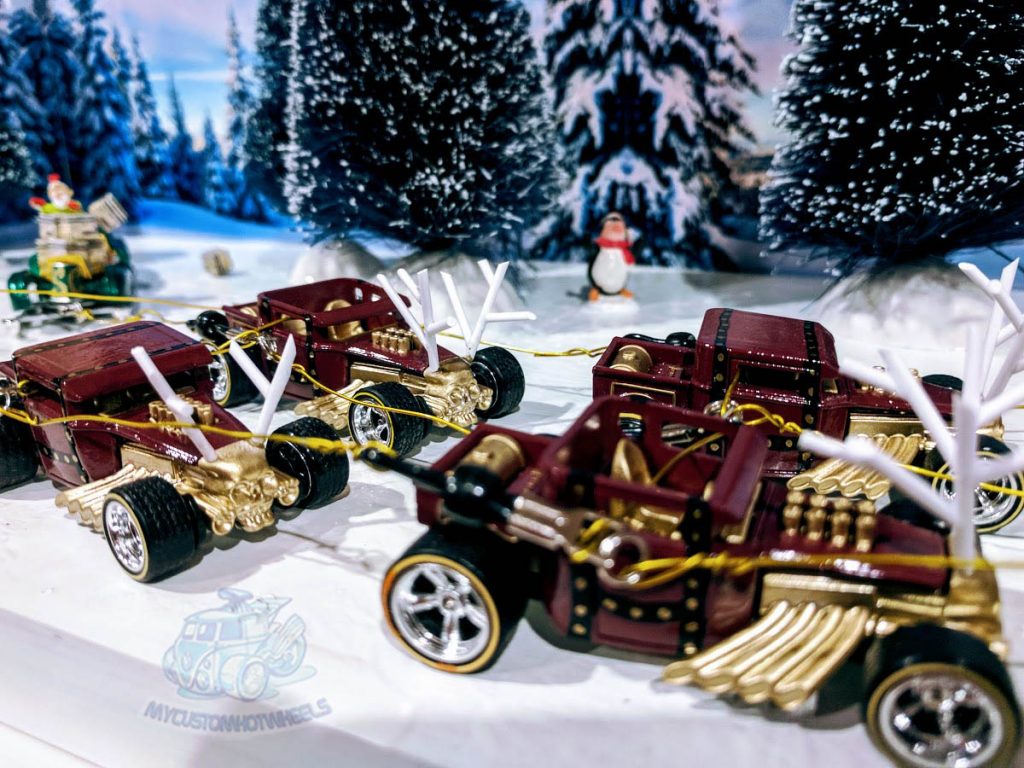 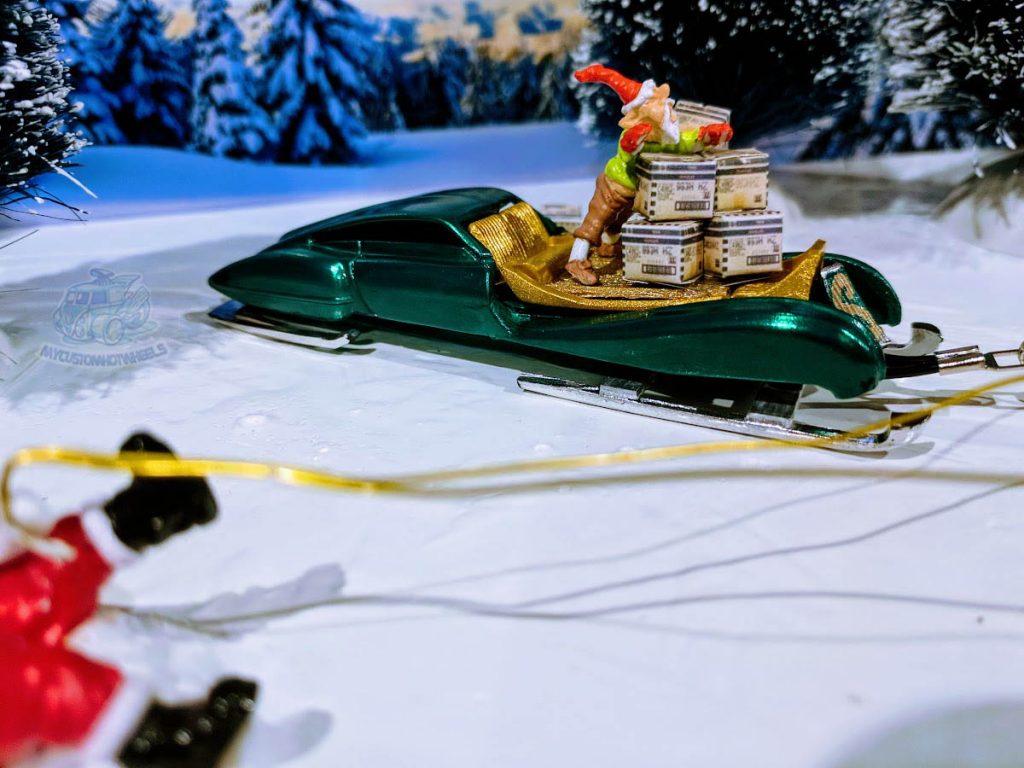 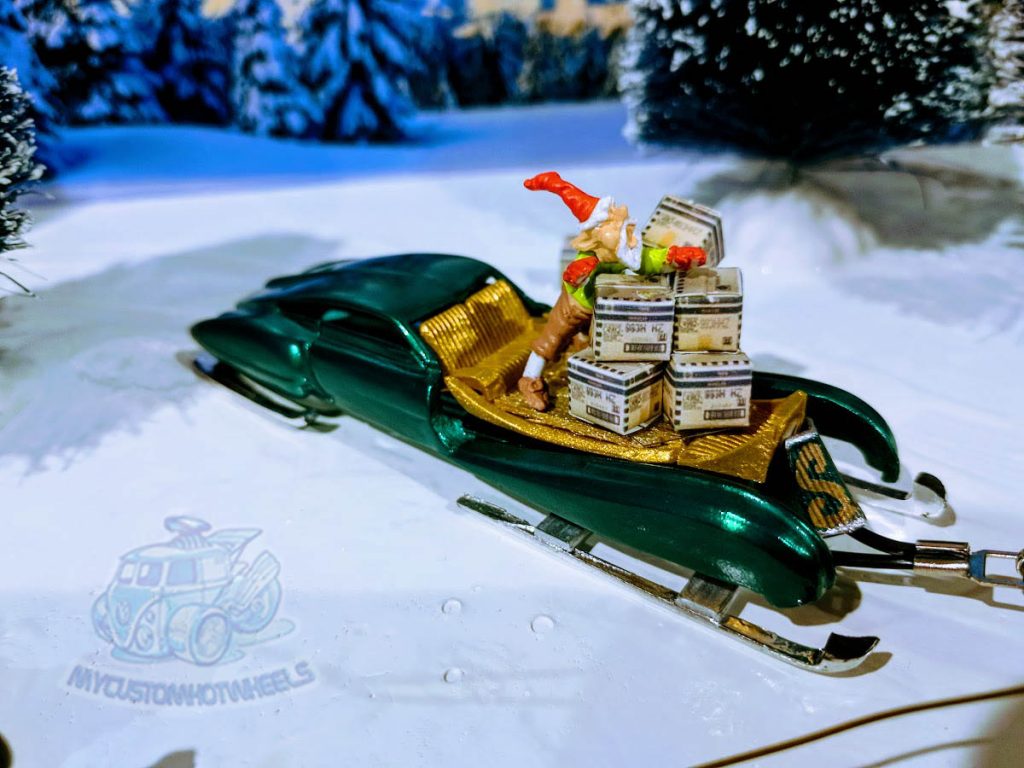 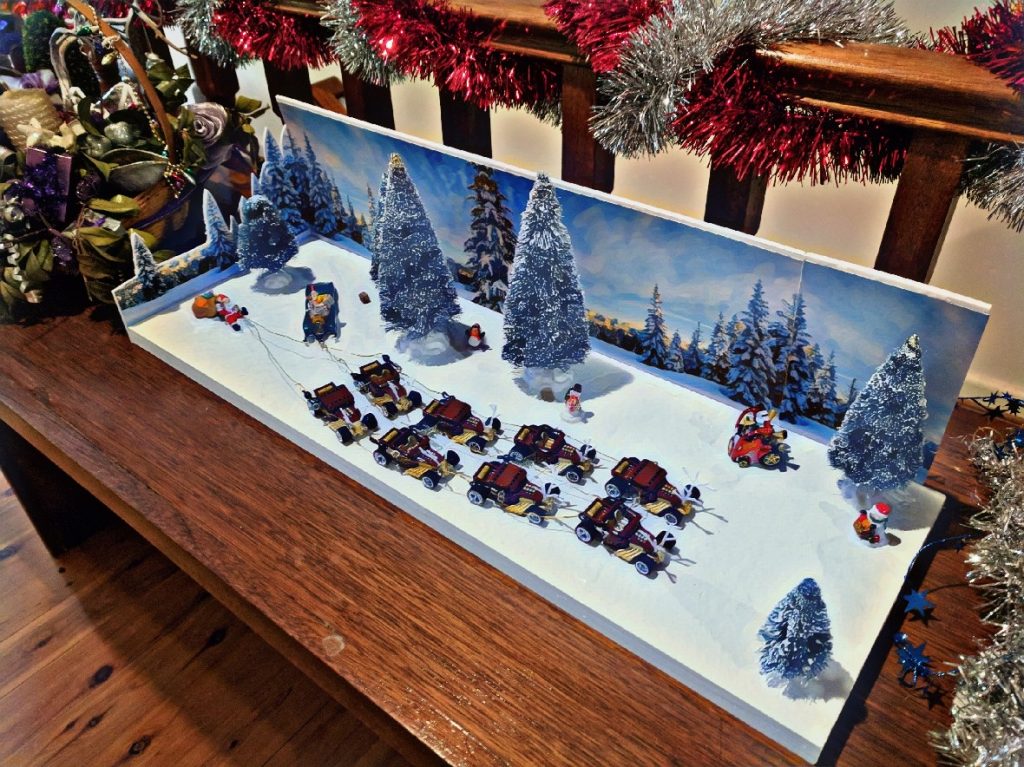 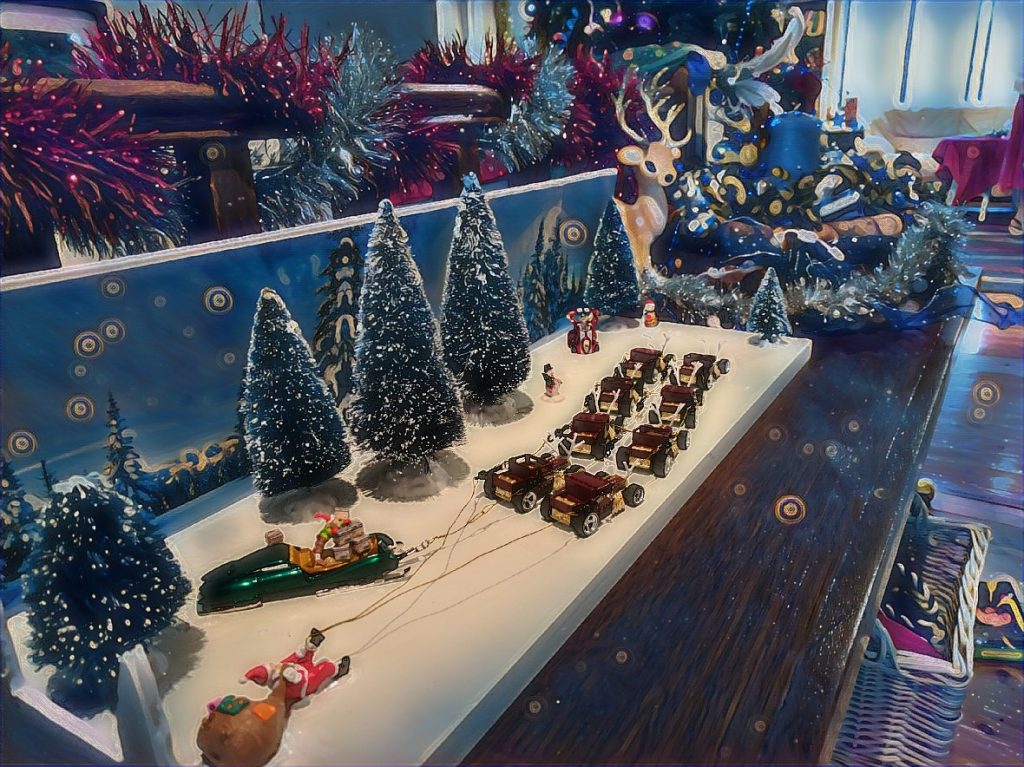 I will leave you with this Christmas Poem I wrote in 2015 – because nothing much has changed and it still holds true. 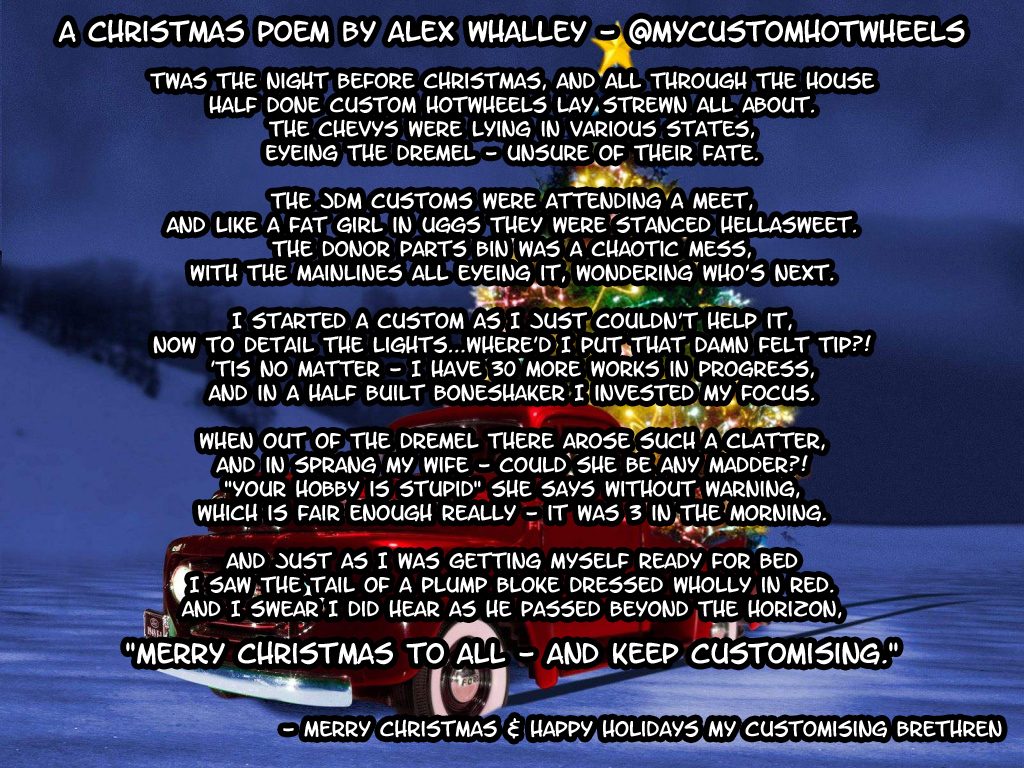 Twas the night before Christmas – in 1:64 scale 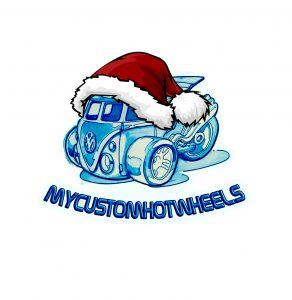