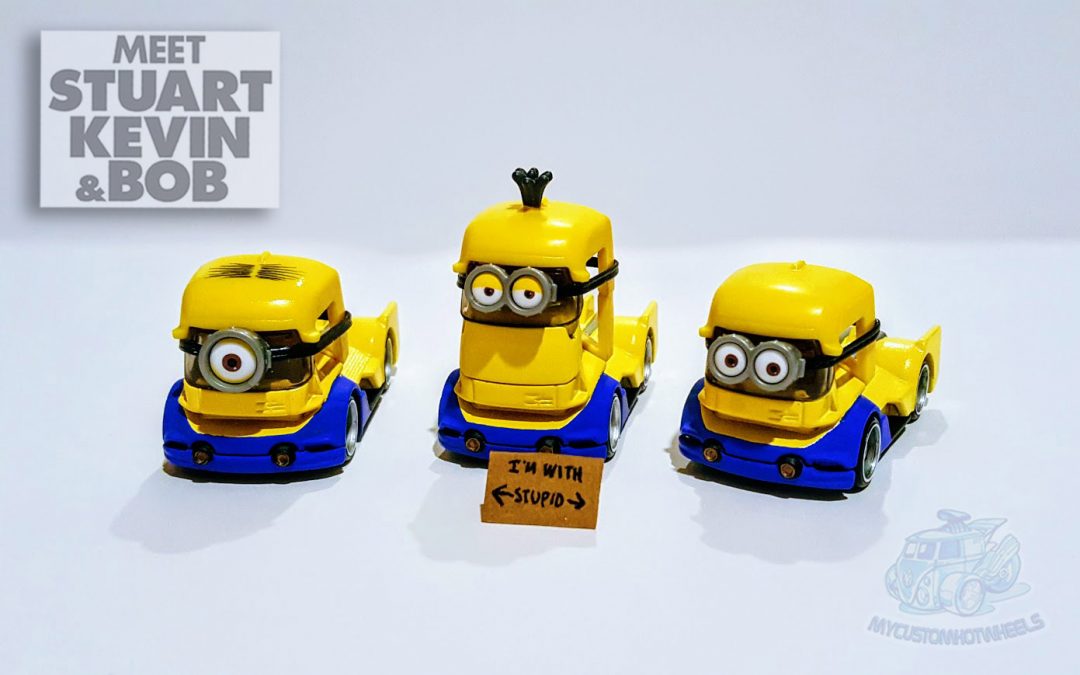 My Custom Minions …Now Have Competition

Not long after completing my Hot Wheels take on Minion Kevin, Stuart & Bob I learned that @HotwheelsOfficial were releasing their own officially licensed Despicable Me™ Minion Hot Wheels car. Now I am in no position to judge but. No wait sorry, scratch that! I’m totally in a position to judge… and I judge the following Hotwheels take on Minion Stuart to be … up there with the latest Minion movie, Despicable Me 3.* 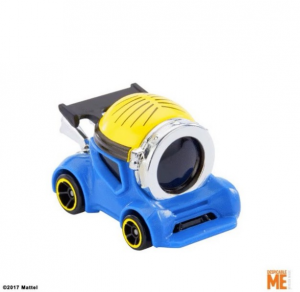 The Casting Mattel *SHOULD Have Used 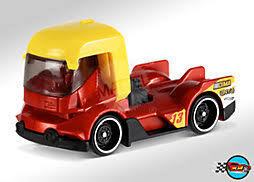 When I first laid eyes on the newly released RIGHEAT casting from Hot Wheels I instantly saw a Minion. In actually can’t see anything BUT… even the roof is the same Minion yellow and that ‘mouth’ even has a hint of a smile. The final part however that ‘seals the deal’ for me are the headlights and grill that meet the wheel arches – the wheel arches making perfect overall bands and the headlights in the perfect spot to be the buckles that hold the overalls on.

No-one at Hot Wheels saw it that’s for sure, because when they decided to release their own version it was…not as good as mine, I reckon anyway 😉

In the Beginning There Was… Just Minion Stuart.

Funnily enough, it wasn’t just Mattel who decided to make a Minion Stuart first – with my initial idea only being applied to one Rig Heat casting*
*Ironically for a pegwarmer I only found 1 casting and had to search 4 different stores to find the three more required to make two more Minions.

Creating Minion Stuart was actually one of the easier customs I have done, namely because it came with the new (very tasty) deep dish mainline wheels. This meant no wheelswap was required – and with a metal base that was a huge relief! The casting itself is plastic which meant drilling it out was super easy. It also meant that I could use acrylic detailing paint without needing to apply undercoat or prepare the surface in any way, shape or form. #WINNING 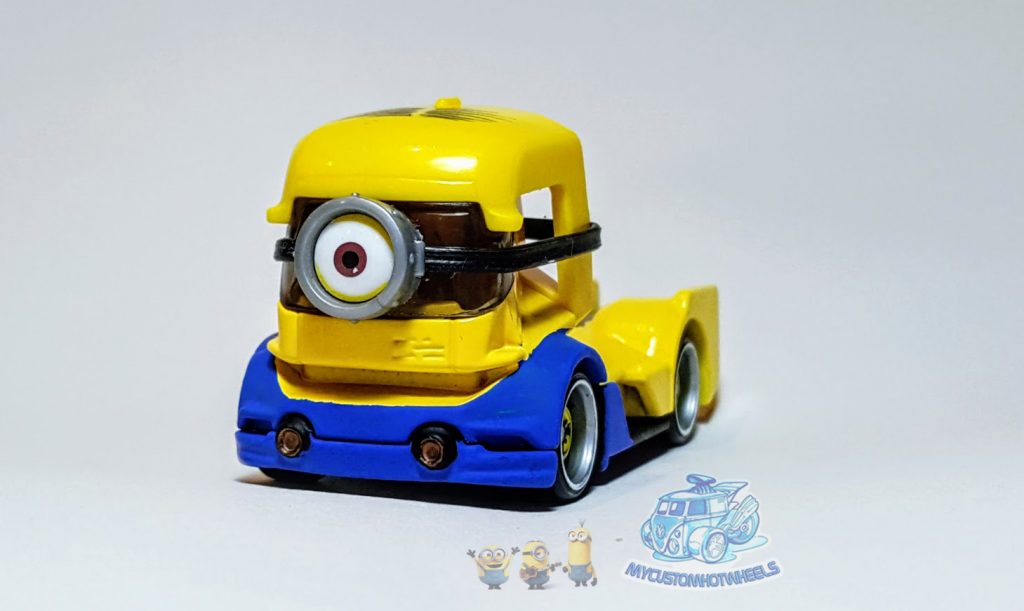 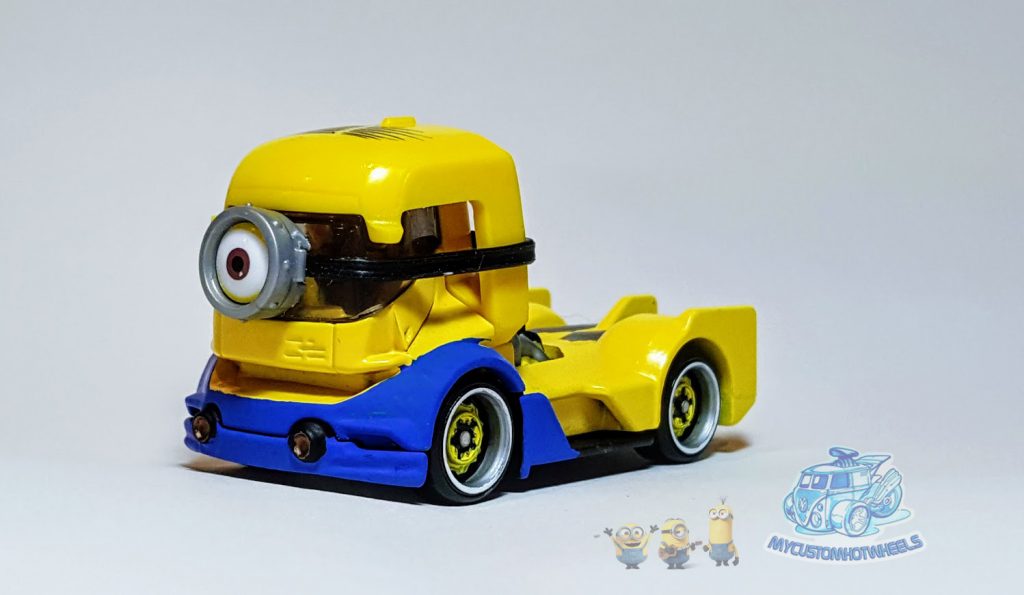 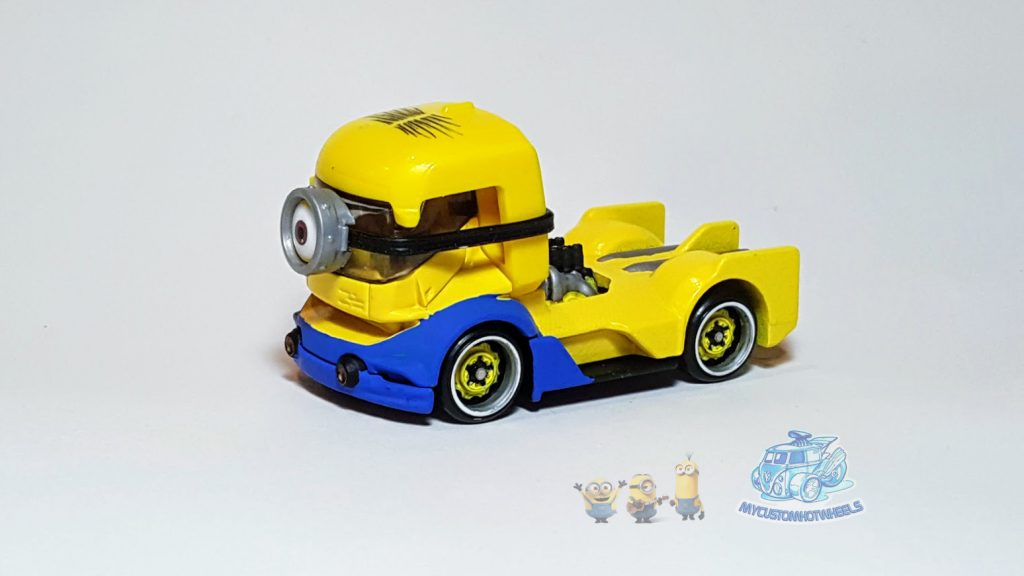 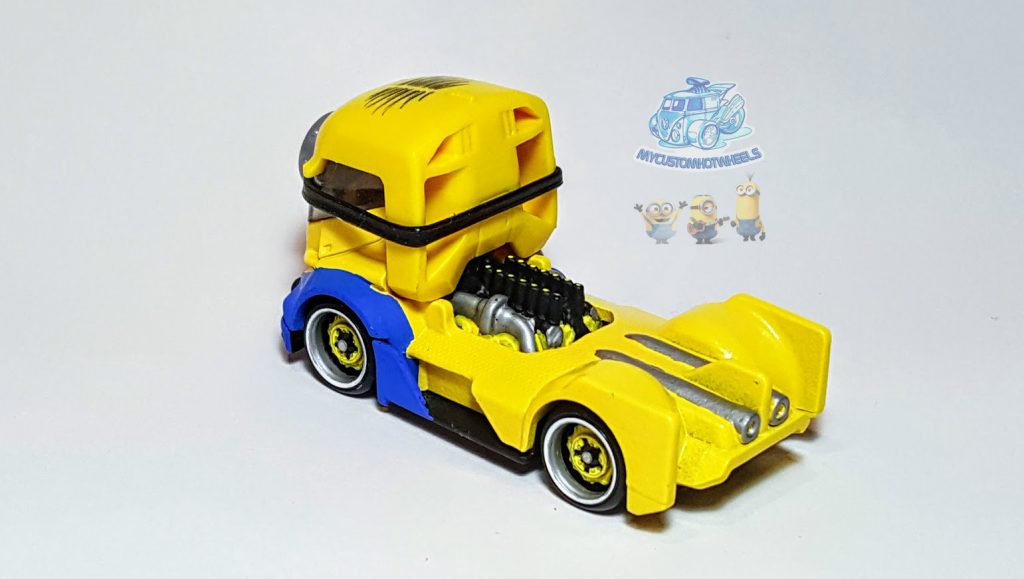 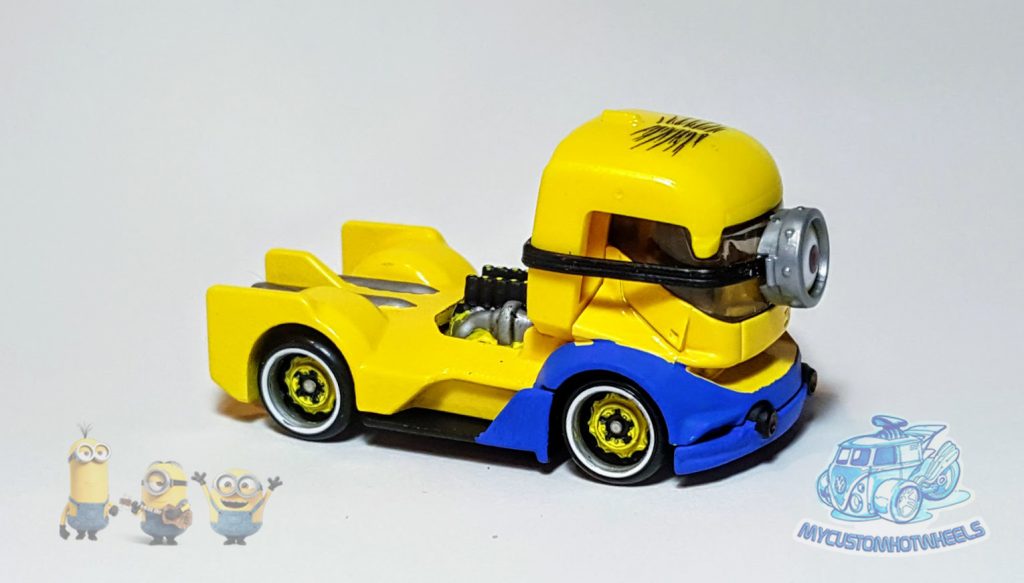 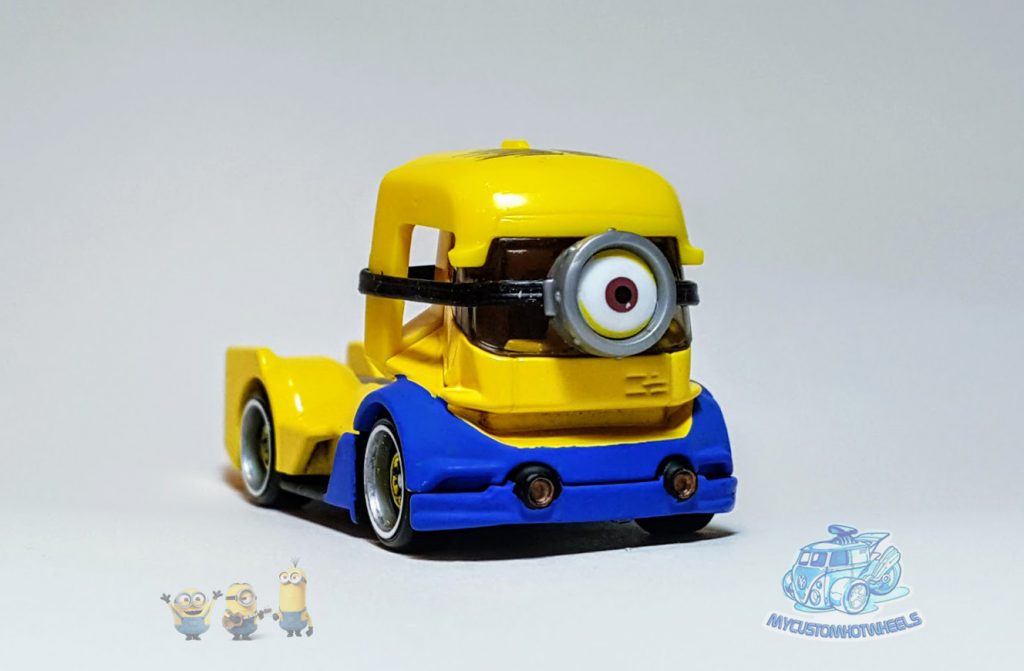 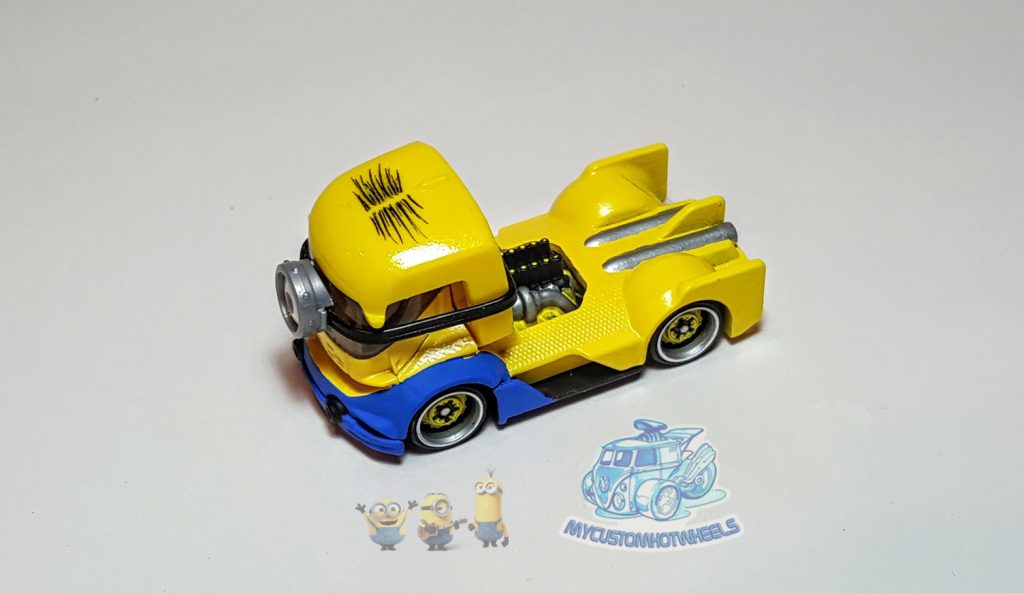 *No free steak knives sorry*
The response from sharing Minion Stuart on Instagram and Facebook was overwhelming and as the demand for additional minions grew I realised the masses had spoken, and spoken most righteously! It was time for Minion Stuart to be joined by his friends Kevin and Bob – and that meant finding more Righeat castings, 3 more in fact.

Making Minion Bob was basically like making a carbon copy of Stuart – excepting for the fact I needed two eyeballs not one. Luckily I have been customising for some time now and as a customiser I see EVERYTHING as a potential part. This meant that last year when my kids were given some Megablocks brand minion lego I quickly nabbed the removable eyeballs from any and all minions they had in the set (after they got bored of them of course) and put them into my ‘drawer-o-randomness’ 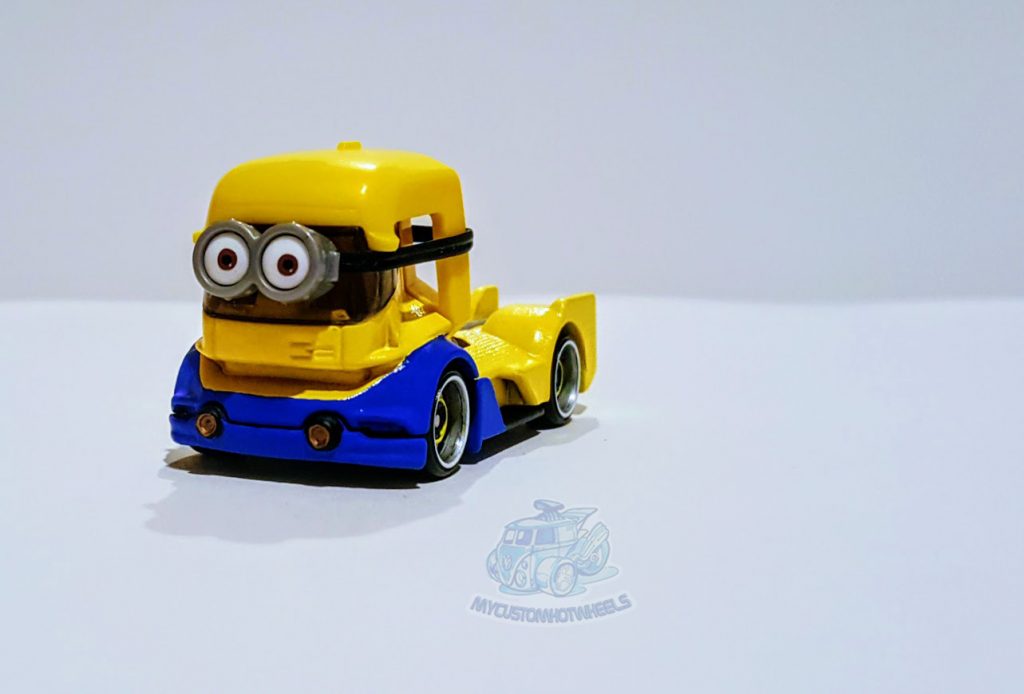 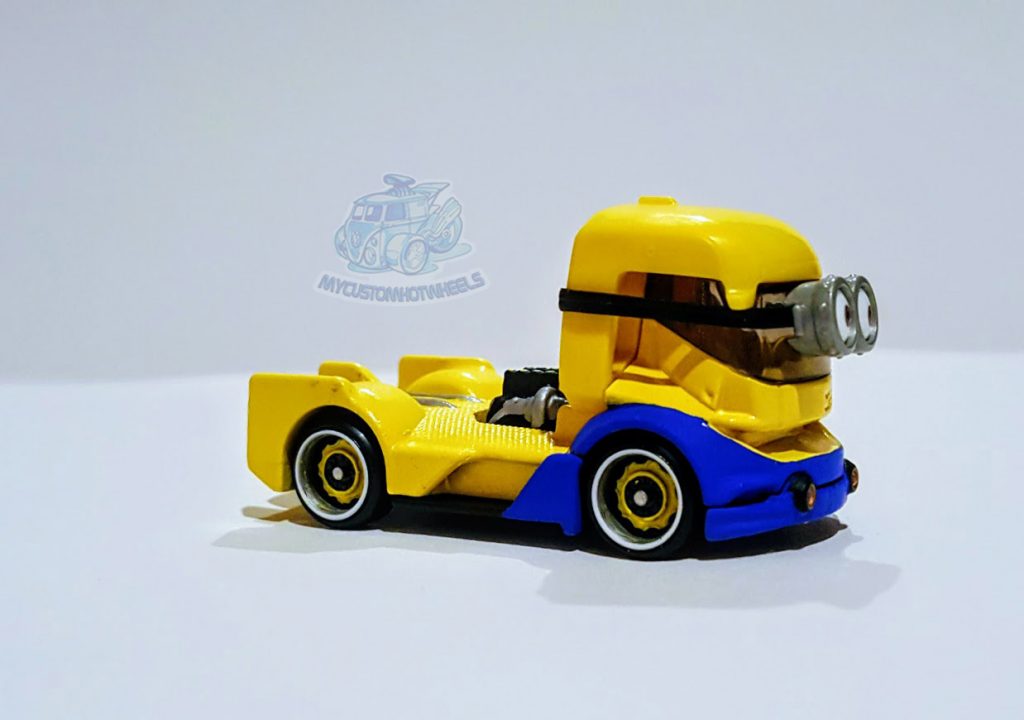 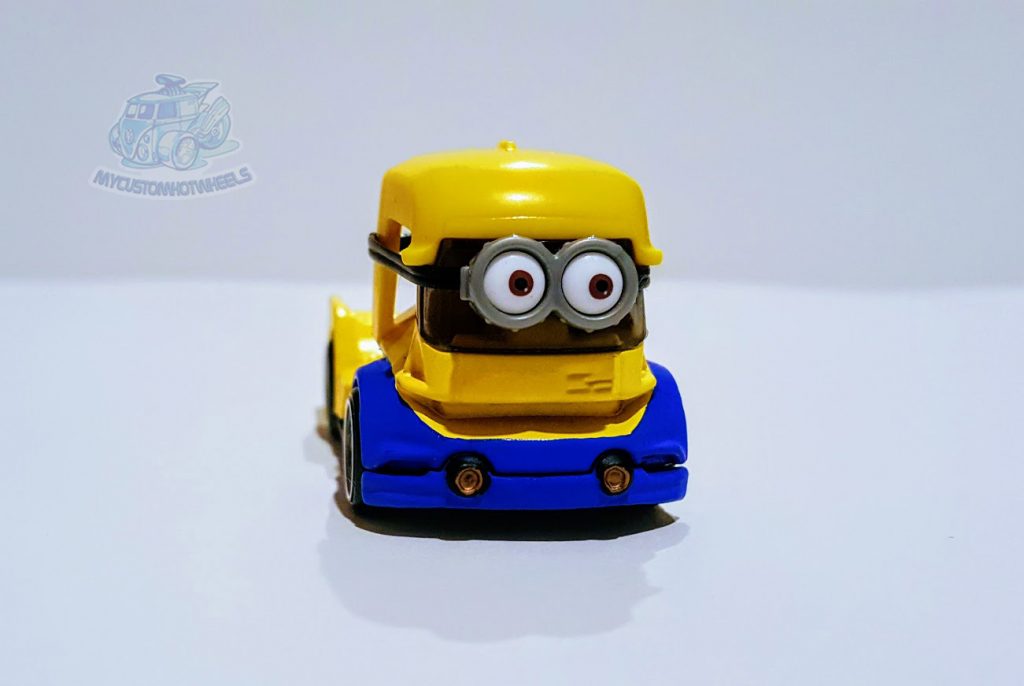 Minion Kevin however was going to require a little more work but again the nature of the Righeat casting meant this was relatively easy to do. Creating Kevin and his taller head was accomplished by simply painting a windscreen in the same yellow as the body and extending the rear pillars of the original roof piece to accommodate the new height.
It actually turned out better than I thought with the bottom of the painted windscreen creating a mischievous smile on Minion Kevin’s face.

He’s a sneaky one this Minion Kevin… 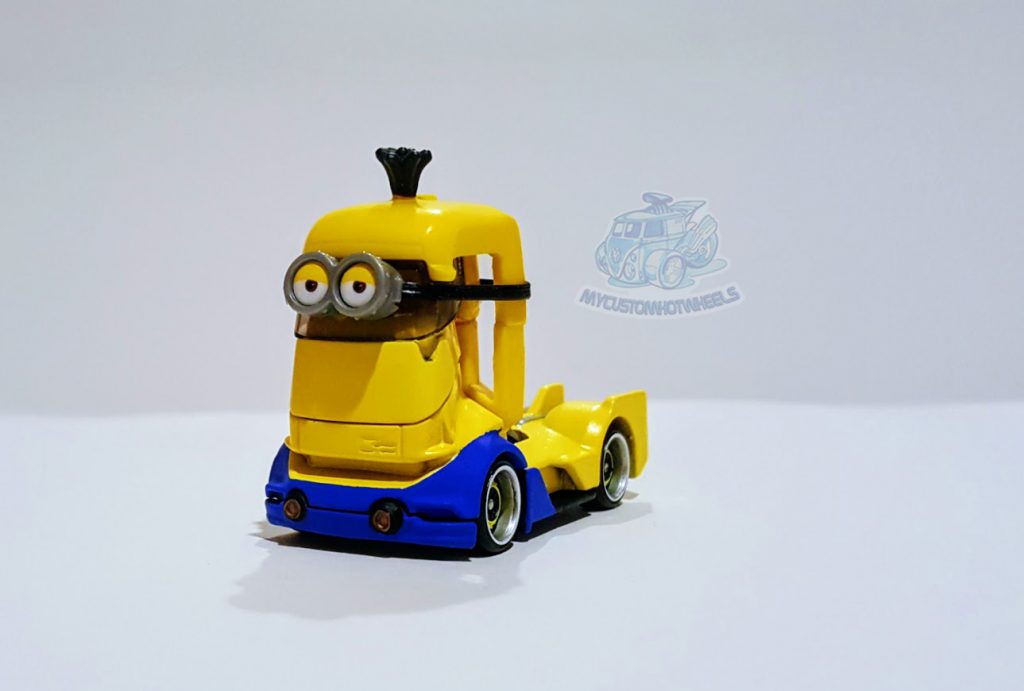 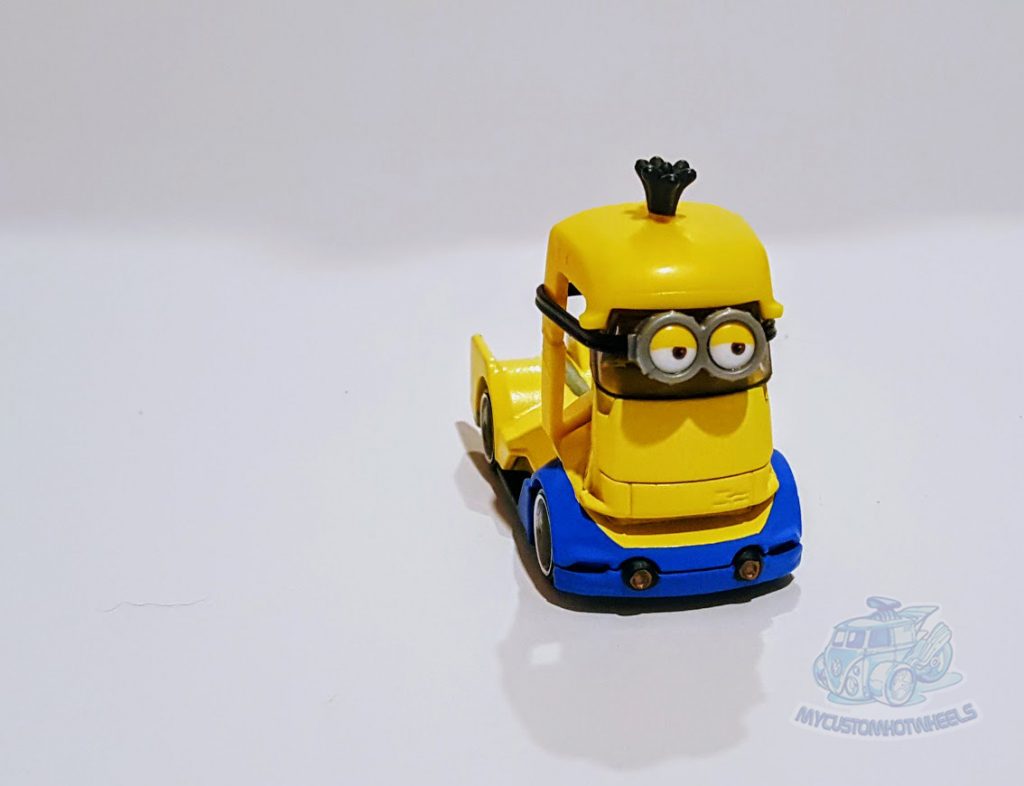 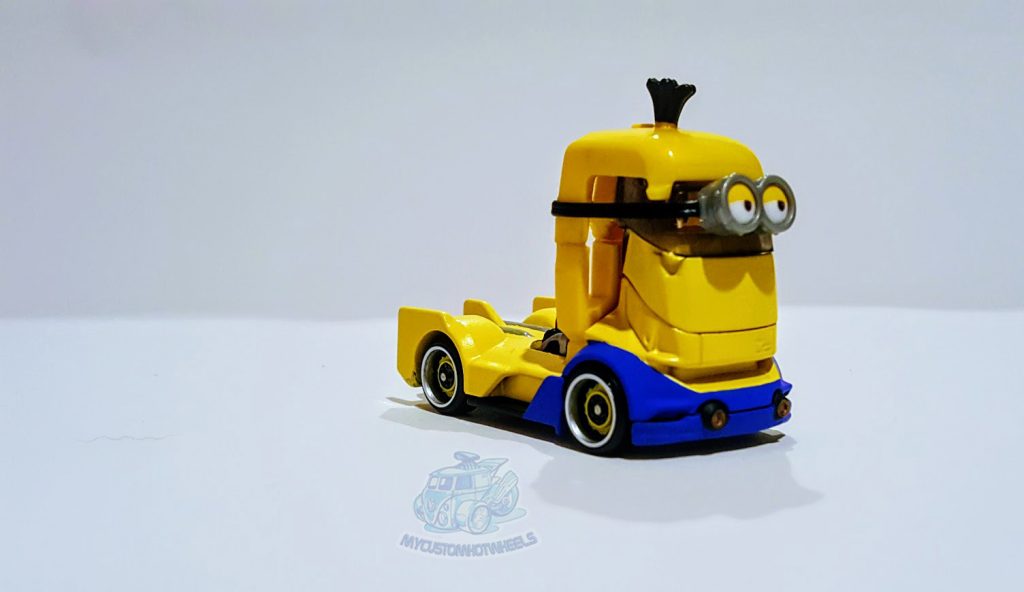 The results speak for themselves :)…. and it is with the greatest of pleasure that I formally introduce you to the My Custom Hotwheels take on Minion’s Stuart, Kevin & Bob 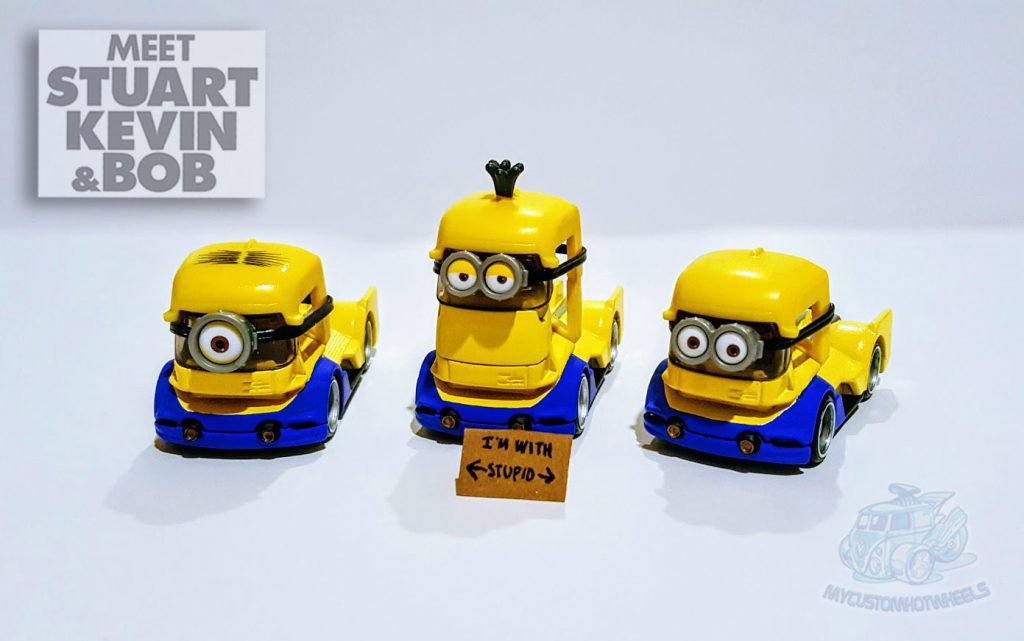 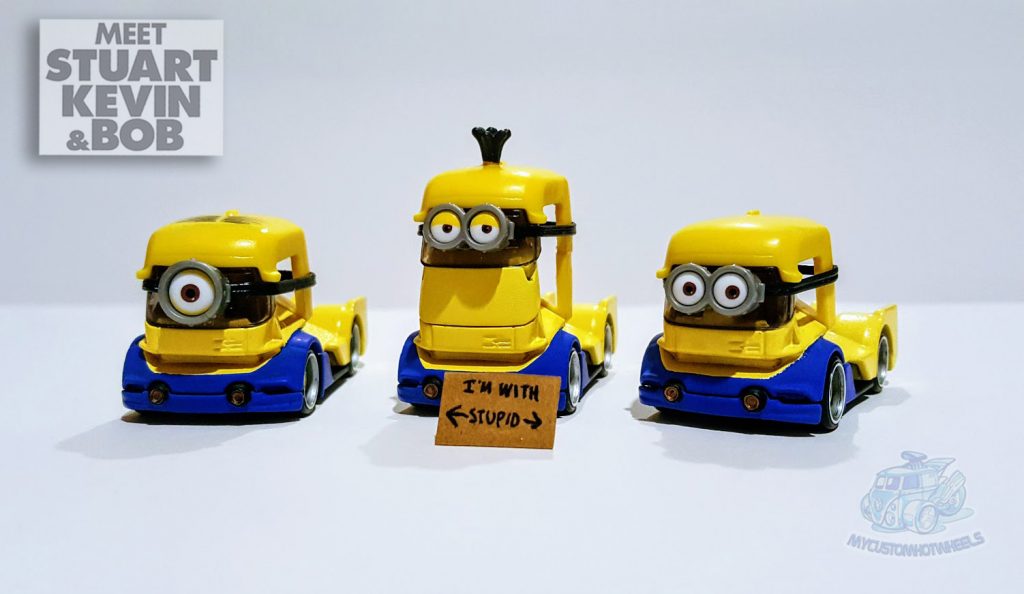 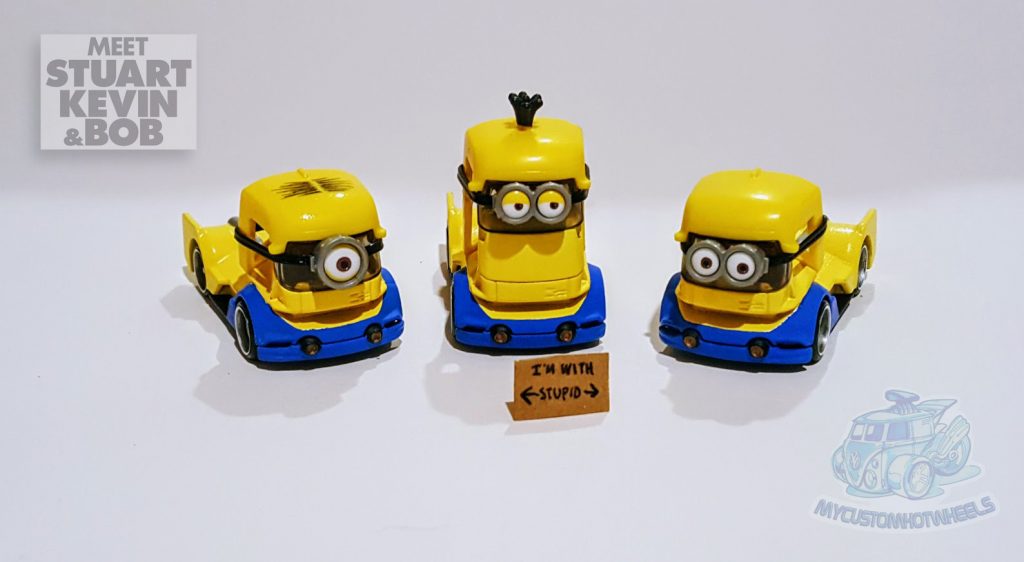 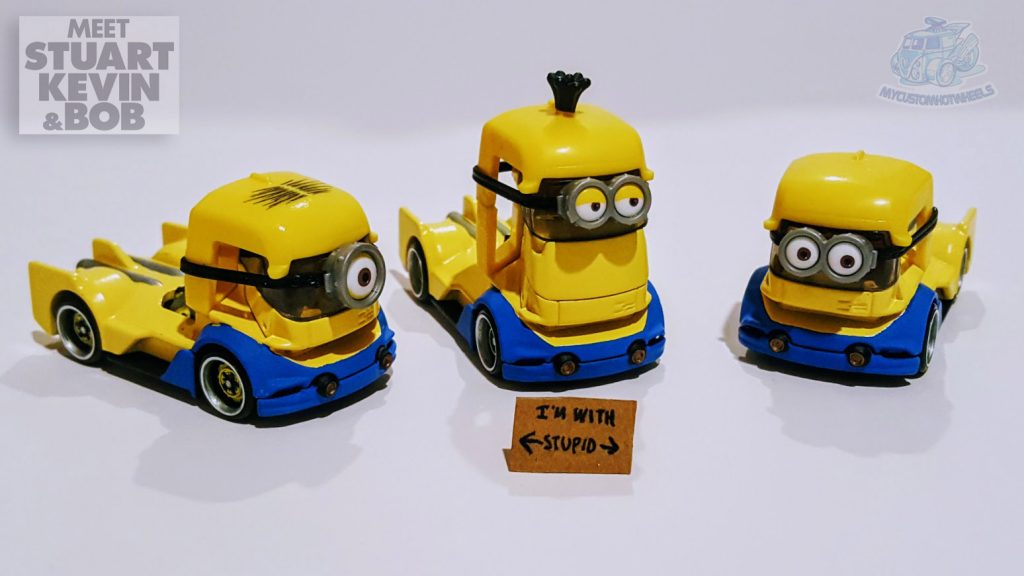 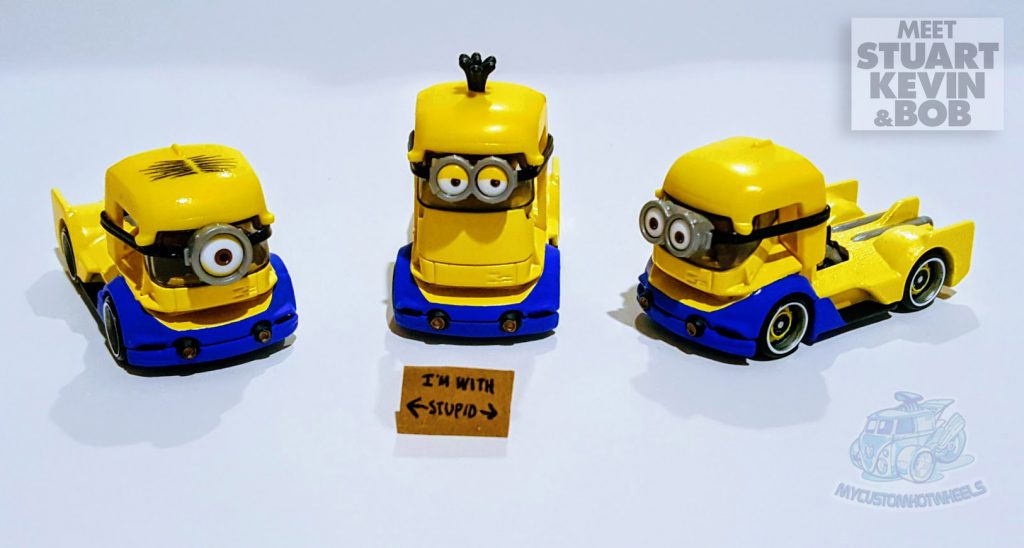 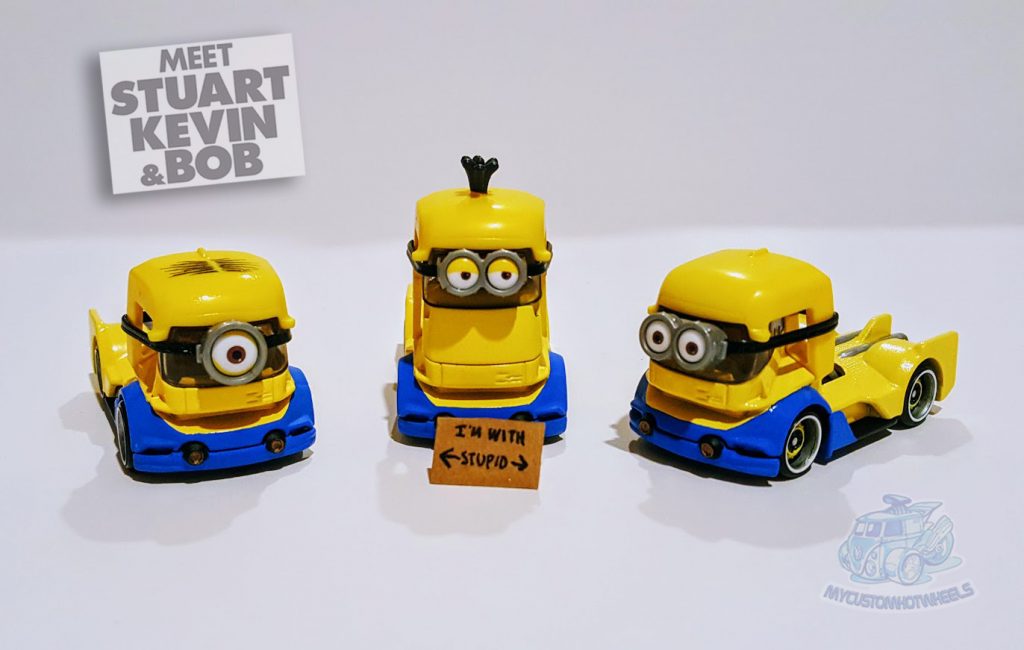 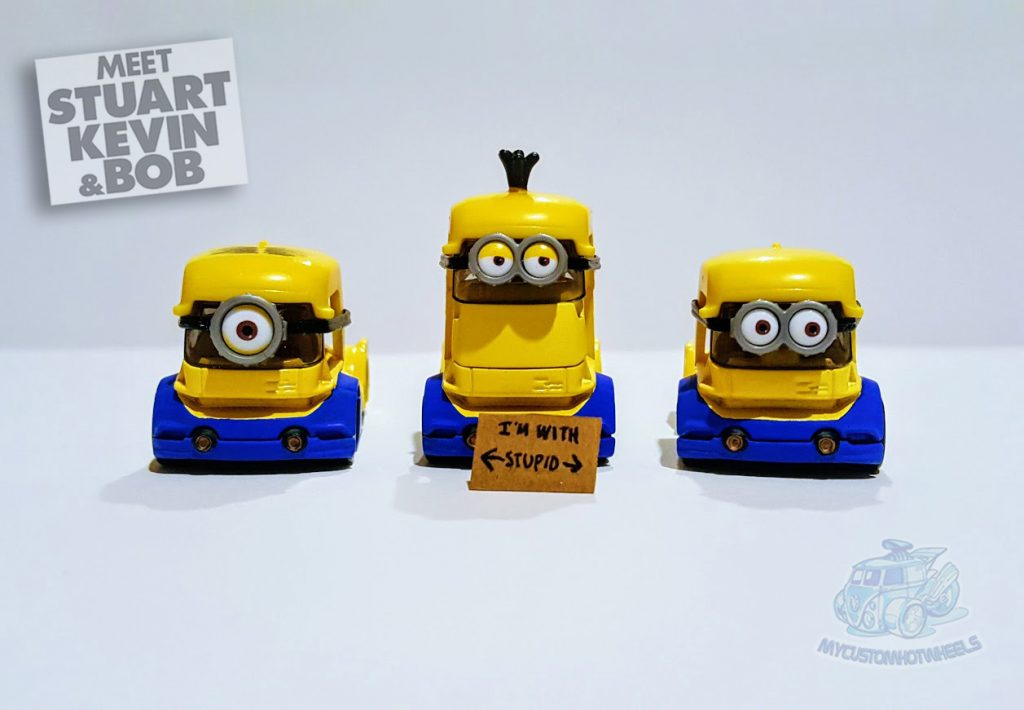