If you follow me on Instagram or Facebook then you know the only thing I love as much as customising Hot Wheels is a good meme - and with that most wonderfully discrete (?!?) of segues allow me to introduce this custom creation in a way that can only be described as ... WINNING! 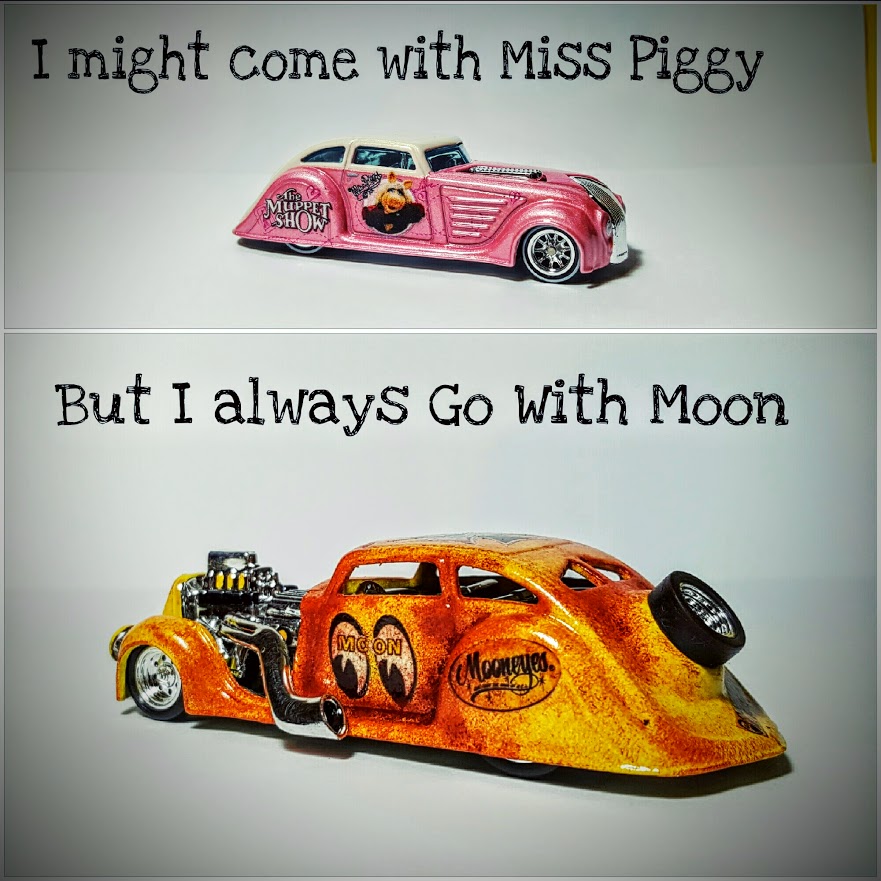 I realise that the 'Most interesting man in the world' is missing from the drivers seat but when I asked him for a quote he indirectly answered any further questions I may have had regarding his appearance on MyCustomHotwheels.com with the following words:

He's probably not all that interesting anyway I reckon, meh whatevs.

Turning a Lady into a Feral Bitch

In order to turn this elegant 'pretty in pink' Chrysler Airflow - which is a really nice casting of a beautiful car I had otherwise never seen nor heard of - I needed to remove...all of it! 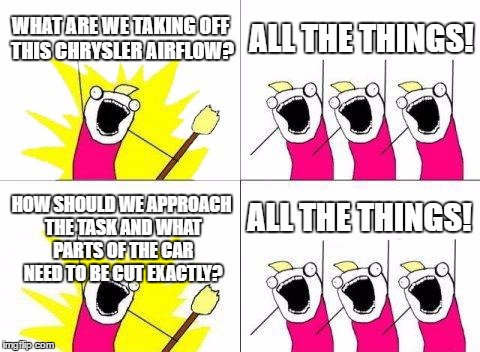 Right well those guys were useless! Keen as hell, but useless.

In all seriousness, the first thing I needed or at least wanted to do was to remove that ugly front end that, let's be honest - looks somewhat like a baboons rear end. Well it does!

A Bad Moon On The Rise

Awesome pun aside, the original plan was to cut the entire front off the chrysler, from the firewall forward basically and then create a new base for the engine and front axles. 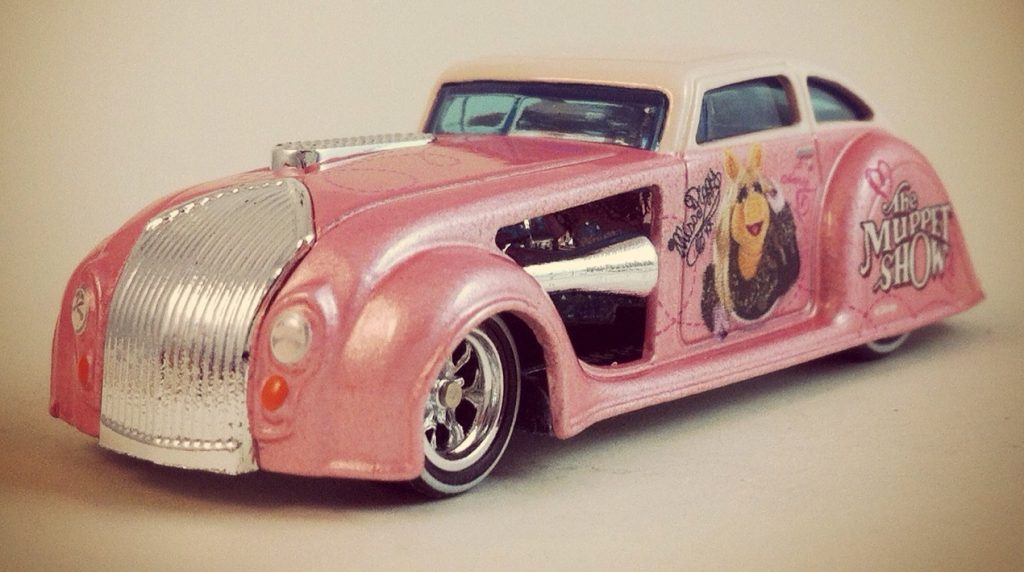 The hole in the side reveals how nice the front fenders are. This image also shows how baboon ass-esque that front end is :p

But then I noticed the line made by the existing hole in the (side of) bonnet and realised the sweeping lines of the fenders and sideskirts were too nice to remove and set about the task of cutting* the rest of the bonnet out so as to carefully leave both sideskirts and fenders attached and intact.

*I do all my cutting manually using a jewellers hacksaw and as you can tell from the resulting images below and the finished product, it does a bang up job - every time too I might add. 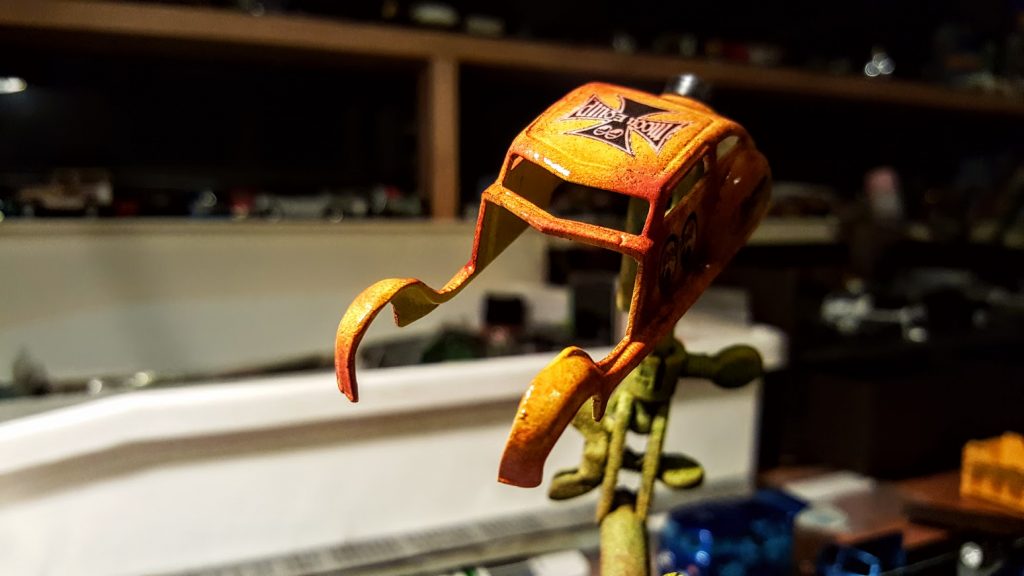 Now to put the base back on along with the new wheels... 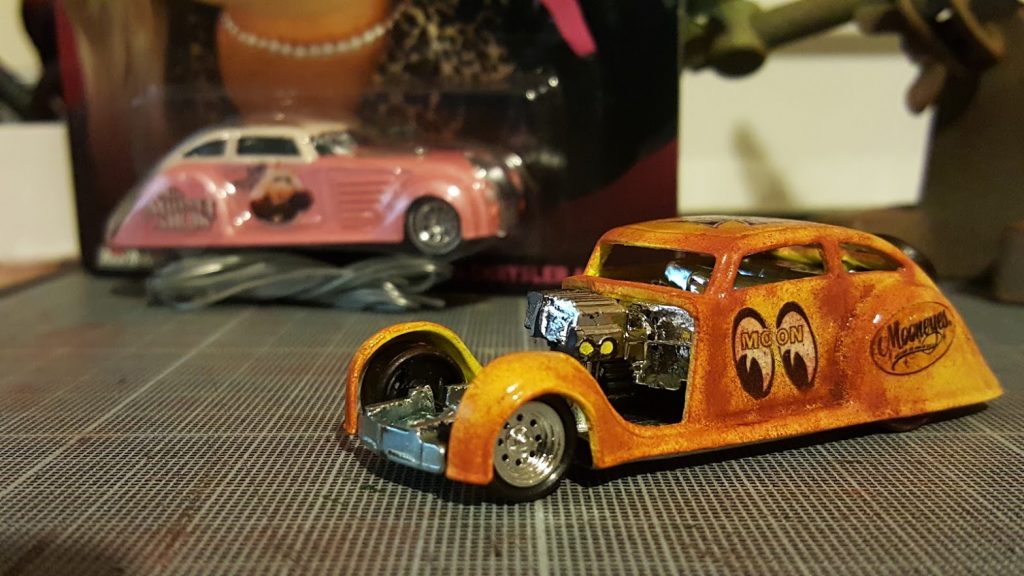 I had already detailed a section of the engine - basically the part left over after I had chopped out the original engine - in readiness for the new engine I had decided to go with.

It Seemed Like a Good Idea At The Time...

It's funny how something can fit so well in your mind but look so out of whack in reality. That was definitely the case here as I tried desperately to make this engine fit like it did in my mind's eye. 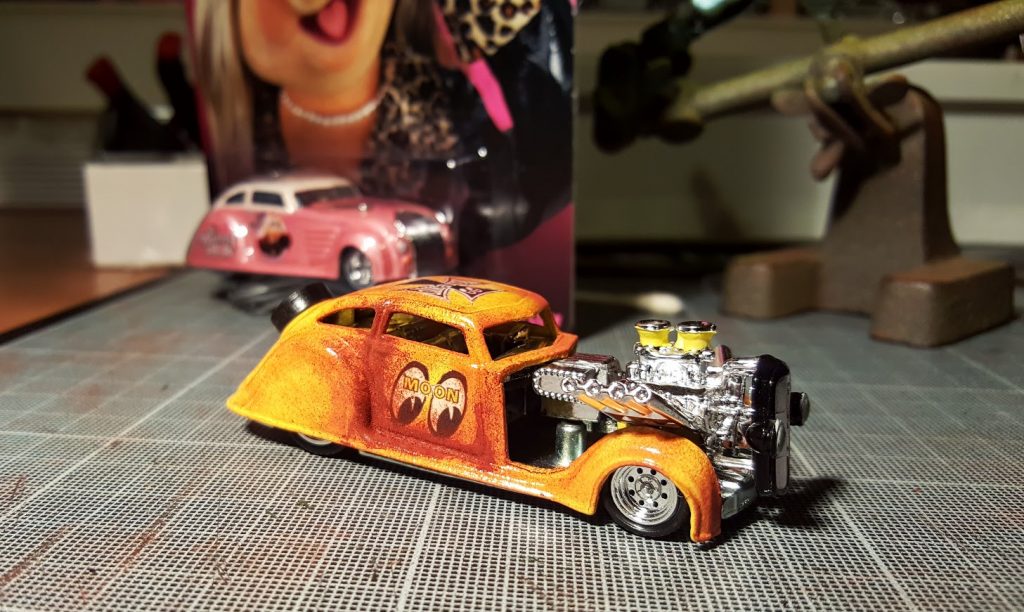 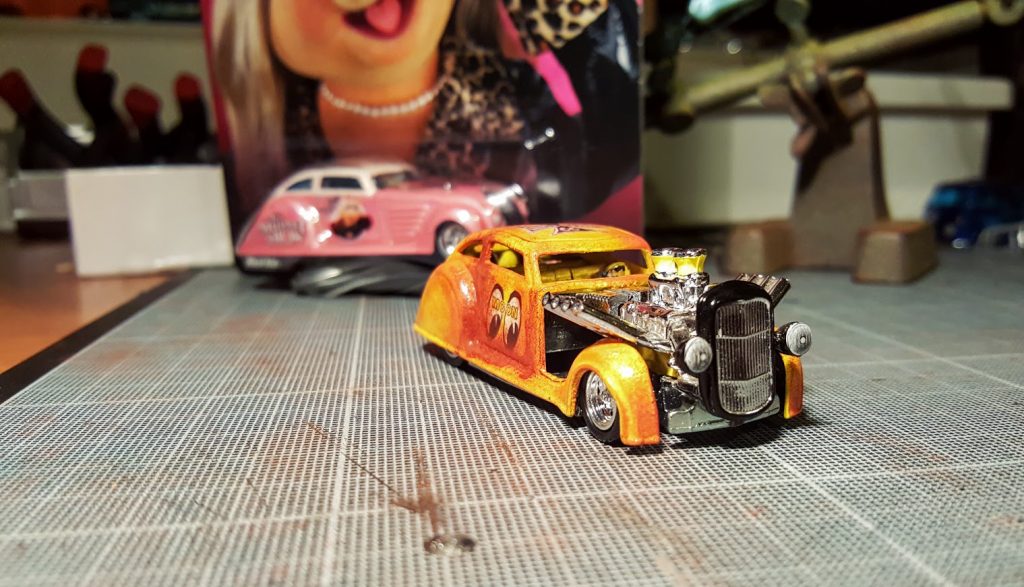 I eventually went with an engine and nose piece that was much lower slung and as such stopped the thing from looking like... well like that up there!

The engine and nose piece (which came from a cheap Motormax brand hotrod) was all chromed and had to be painted and detailed to match the yellow of the Moon eyes vehicle itself.

There was also an issue with the headlights. The issue of course being that there were none! - so I quickly set about remedying this fact by stealing a pair of lights from an old Matchbox Model T or similar I had lying around.

So after cutting and painting and detailing and gluing (and swearing, lots of swearing at the stupid #%$@*!! fiddly stuff) I was finally ready to... wait!

Before I share the final product allow me to fill you in on those final touches that really make all the difference. In this instance those touches included: