My Craziest Custom Yet.

Tired of doing the same old JDM stuff over and over again, I was quite happy when I found a custom competition going on through a local Facebook Group that basically required you use a Mustang Fastback as the base.

I actually managed to disqualify myself from the competition because I revealed my build publicly and was not supposed to. Whoops. No matter because not only did I have a great time building this creation, I also managed to nab a Lamley Customs mention as well! (Can I get a hell yeah?)

And so it was with great pleasure that I - and Lamley Customs introduced "Mustang Silly" to the world.

In the process of creating this monster I came up with a few little 'hacks' and customising tricks which I think you might find interesting, and maybe even useful for your own future builds, so I will take you through the process step by step...

I wanted to get as close to a spectraflame effect for Mustang Silly as I could so I knew that I had to polish the crap out of the casting before I even thought about putting paint anywhere near it.

Unfortunately I did not end up using a paint that was metallic enough and so a lot of the metallic spectraflame effect was lost. It is still there but it certainly does not show through on the photos sadly. For this I would NOT recommend Bristol Paints branded metallic spray paints as they are really not metallic at all.*

*I recommend and from now on will only use Dupli Color branded metallic spray paints: 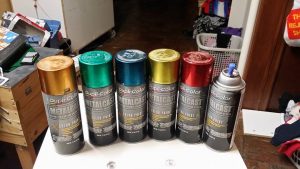 Turning a Mustang Into a Gasser

Now I was ready to start putting all the pieces together and working out how to make them fit. What I thought was going to be a relatively easy process turned out to be anything but and at every turn I was faced with a problem I had to cut, grind and gnaw* my way out of.
*Many a fingernail was lost during this build. We take this moment to honour their sacrifice.

I had already been toying around with what she might look like and so now was ready to start putting her together for real.

And yes I too thought that engine was waaaaaay too oversized... it clearly had to go.

I probably should have mentioned that I also had to cut the bonnet out using my Dremel. But then you kinda already figured that out didn't you. Clever clogs!

Putting the pieces together initially to see how they sit.

At first I was tempted to not use the base of the old Gasser at all because I liked how clean it looked with the wheels sitting on the base on their own. I could have come up with a way to hold the wheels in place and maybe even make a diff but the direction I ended up going on was equally awesome... 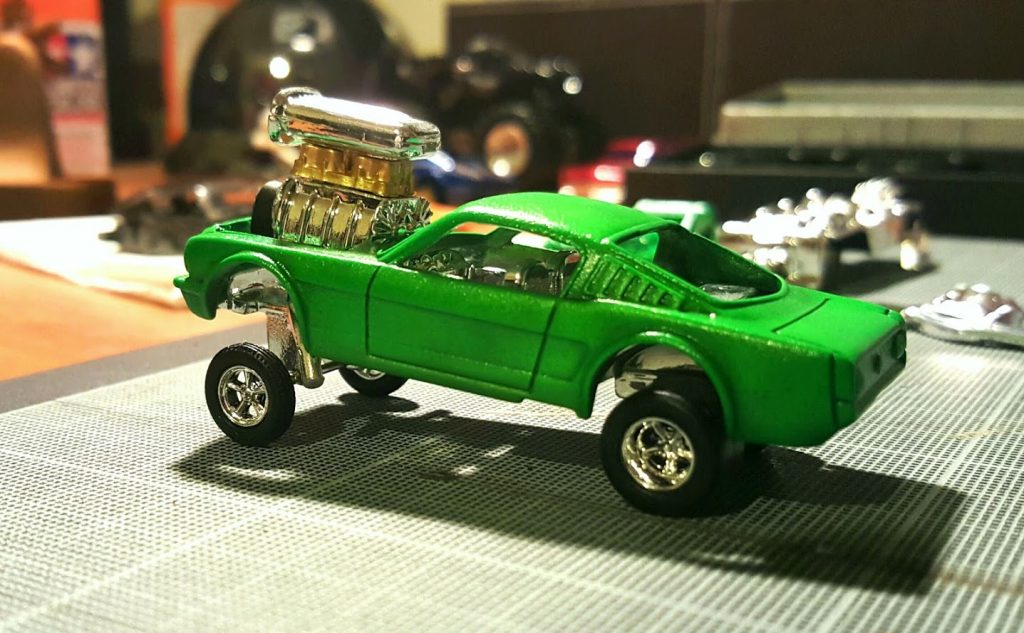 Making a Gasser Base Fit a Mustang Fastback

The biggest hurdle I faced with this build was making the base of the Gasser fit onto or should I say under the Mustang. The internals for the gasser fit no problem at all - I didn't even need to do any cutting, it just fit with the guards lining up almost perfectly. Sweet.

But the base itself jutted out horribly and also didn't sit right. I decided to grind down large sections of it so I was left with only the driveshaft and the two axle ends, but even still it was too long and just didnt work. I then decided to cut the damn thing into bit and so left myself with only the two parts that hold the wheels and the front section so synonymous with the Gasser look - a front section I had taken the liberty of adding a gas cylinder to.

Then I had a moment of genius!

I painted a Q-Tip (and earbud thingy) silver and cut it down to the exact length needed and simply glued it into the gap to give the impression of a continuous connection and a new driveshaft running down the centre.

I then decided to add a parachute pack and so cut the parachute from a Nitro Tailgater and painted it. I then added a section of rubber band and hey presto.

It's the little things that make the difference you know 😉

Added Decals and Details and BOOM!

I added the necessary decals - especially necessary since my paint was so crap and hid all the wonderful polishing I did, and painted the details like headlights and tail lights..