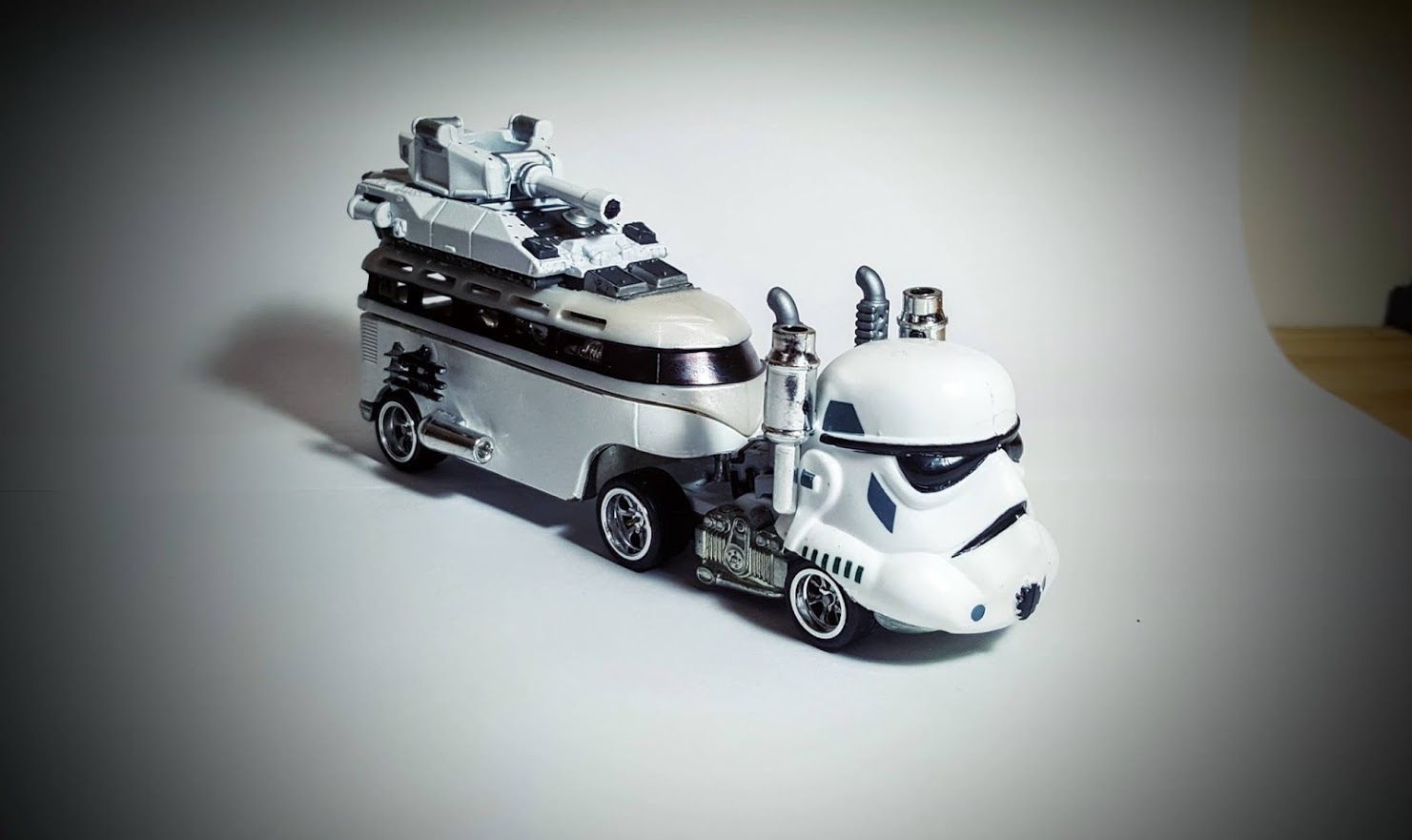 When you look at the world through the eyes of a customiser nothing is safe, and while early stages of ‘Customiser-tosis’ will have you studying every mainline, every pegwarmer, and every other branded diecast car you can find in search of donor parts, it is in the later stages – when you start to go all ‘Oprah Winfrey’ on shit – that you know you are well and truly a customiser… 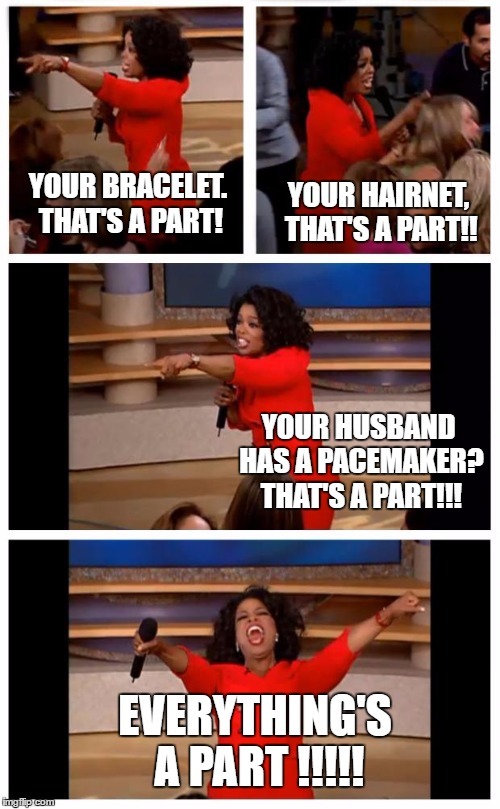 Considering I have been looking at life through Oprah stained glasses for quite some time now it seemed completely normal when I picked up the Storm Trooper themed Pez dispenser and didn’t think of candy. One look at the ‘Pez head’ and I realised it was roughly the same dimensions as the cabin on the Volkswagen inspired hauler creation that is pictured. Already my mind was overflowing with ideas and wondering where I would take it – or rather it would take me 😉 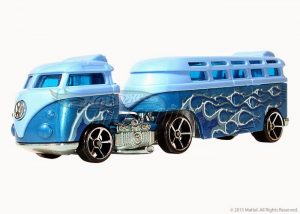 The volkswagen hauler before it turned to the darkside

I then purchased said Pez dispenser, threw away the two packets of Pez that came with it along with the packaging and stuck the dispenser in my back pocket. I then got yelled at by our receptionist because she LOVES PEZ and (as she so eloquently put it) “you are so weird Alex”. She said something else as well but my mind trailed off and started to ponder who would win in a swimming race between a toaster and a kettle. But I digress. A lot. 😀

Volkswagen Turns To The Darkside

With a history associated with Nazi Germany it was never going to be a challenge for the Volkswagen brand to find favour with the darkside.

So the first step was to somehow shoehorn the Storm Trooper Pez head onto the base where the old VW combi hauler cab sat.

The base actually has a metal front that holds the VW logo you see poking out front and centre in the image above – which I promptly removed with my jewelers saw. I kept this metal logo as it would surely be of good use at some point – (which it certainly was when a week or two later I wanted to emblazon the VW logo into the roof of my custom squareback tanker…but more on that another time)

I then began the task of using the Dremel to grind away space for the wheels to effectivley create new wheel arches on the Storm Trooper head that would line up with the base as well as cutting any of the plastic from the Volkswagen hauler so that the two pieces would fit seamlessly together.

The Next Step Was To Raid The Parts Bin… 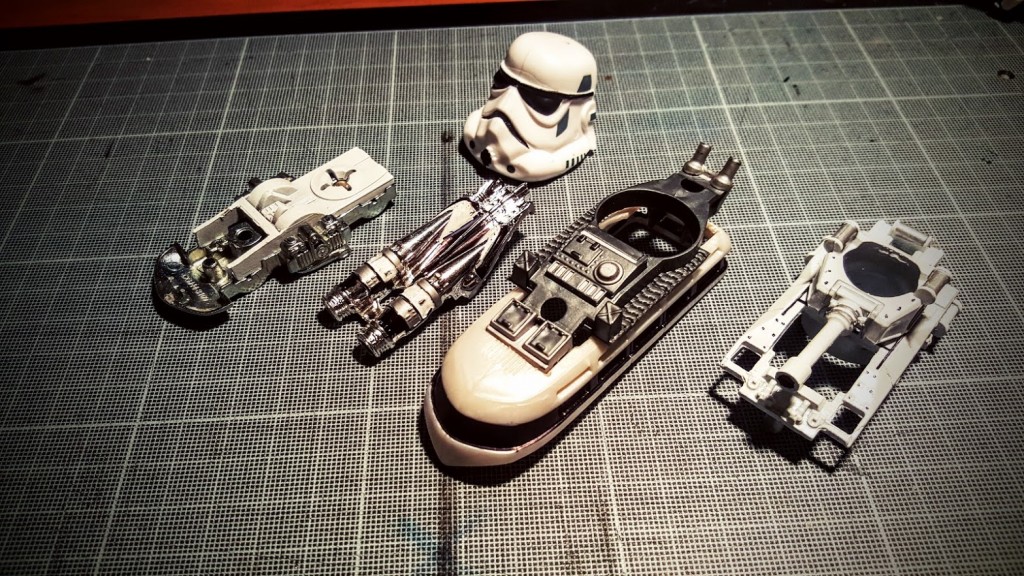 My raid produced the following parts – and of course helped mould the shape, feel and overall look of the ‘Storm Hauler’:

I set about detailing and painting white all of the above pieces and then used our good friend bluetac to hold it all together for the first official photoshoot. 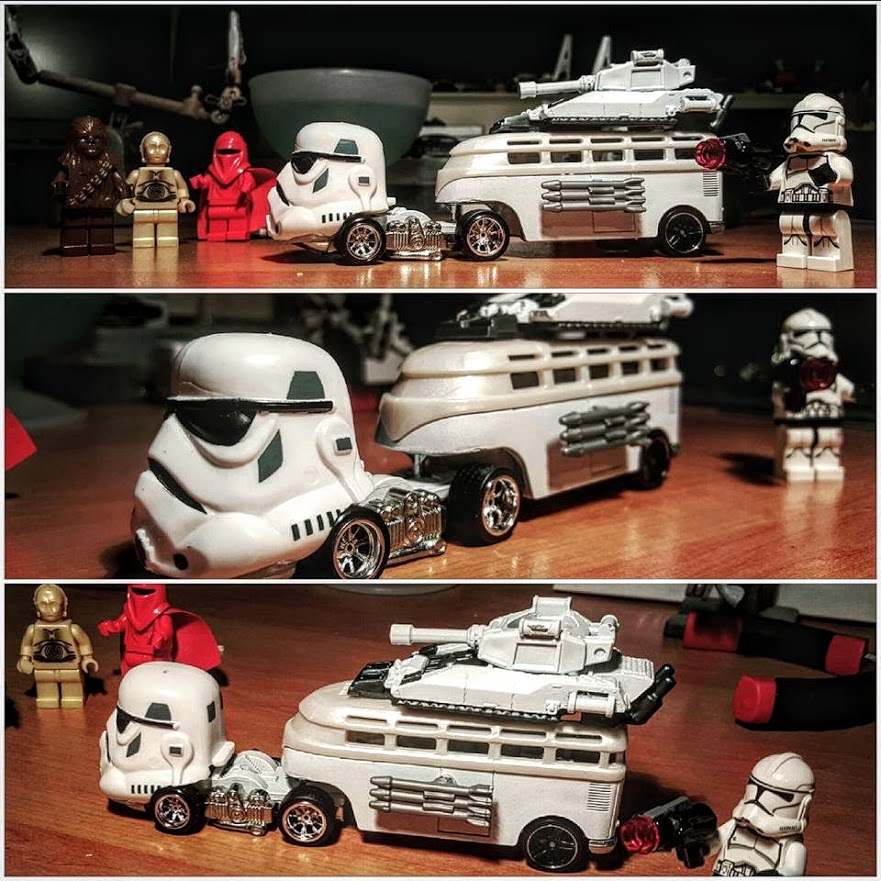 I had not cut any of the roof at this point but noticed that it was definitely going to require it due to the gun turret sitting so far on top of the roof. I wanted it to look flush – as if it was part of the initial design and not an afterthought* (Herein lies the key to good customs vs. average ones) and so attacked the plastic roof section with my blade… 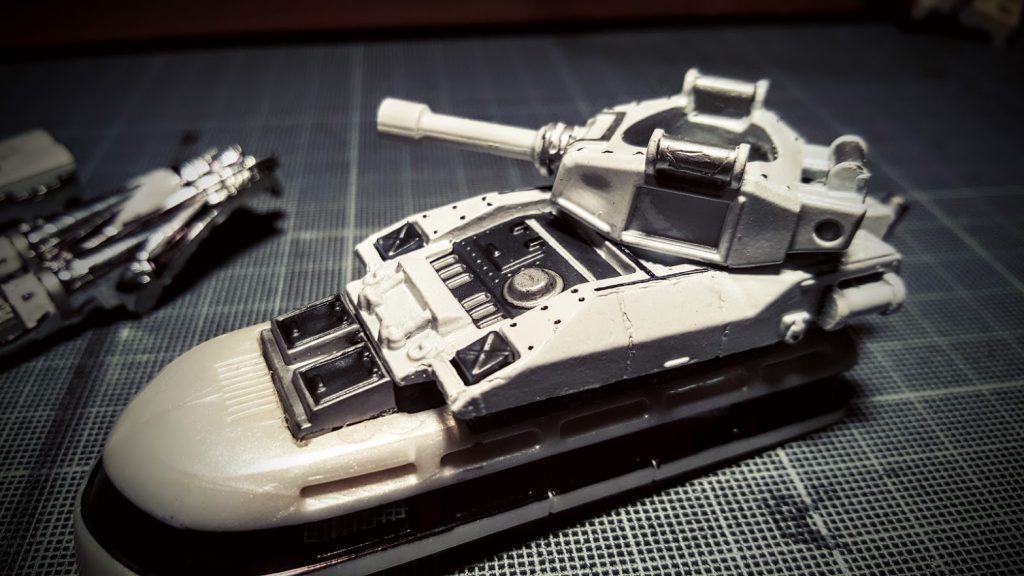 I also was bothered by how unbalanced the cab looked due to the larger ‘cab’ or head and the lack of weight behind it. If this was real it would fall on it’s face the moment you hit the brakes (potentially) and so I needed to balance things. This means another trip to the parts bin is in order, a trip that nabbed us the following additions: 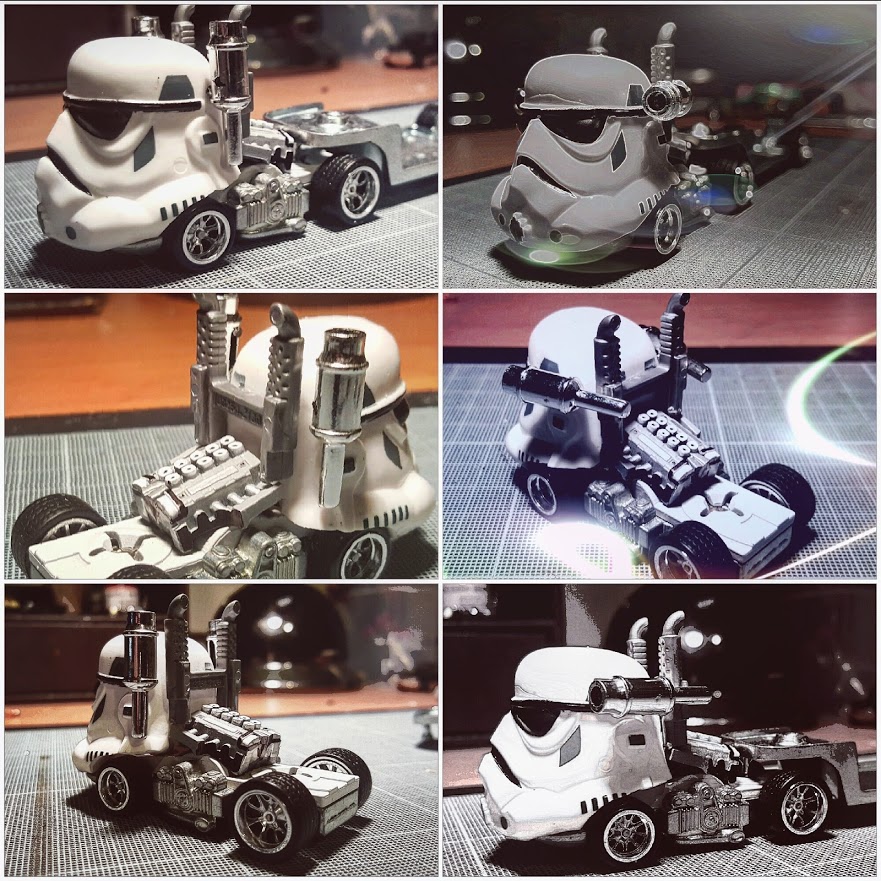 With delusions of grandeur floating through my head I set about creating a rear section that would pivot open to reveal another set of cannons, more guns the Storm Troopers could miss shit with basically – and although it seemed like a nice straight forward idea at the time, the execution proved to be anything but. Definitely more cringe than hinge…although I did get there in the end with a crude yet highly effective hinging mechanism – which I’ll show/share with you now. 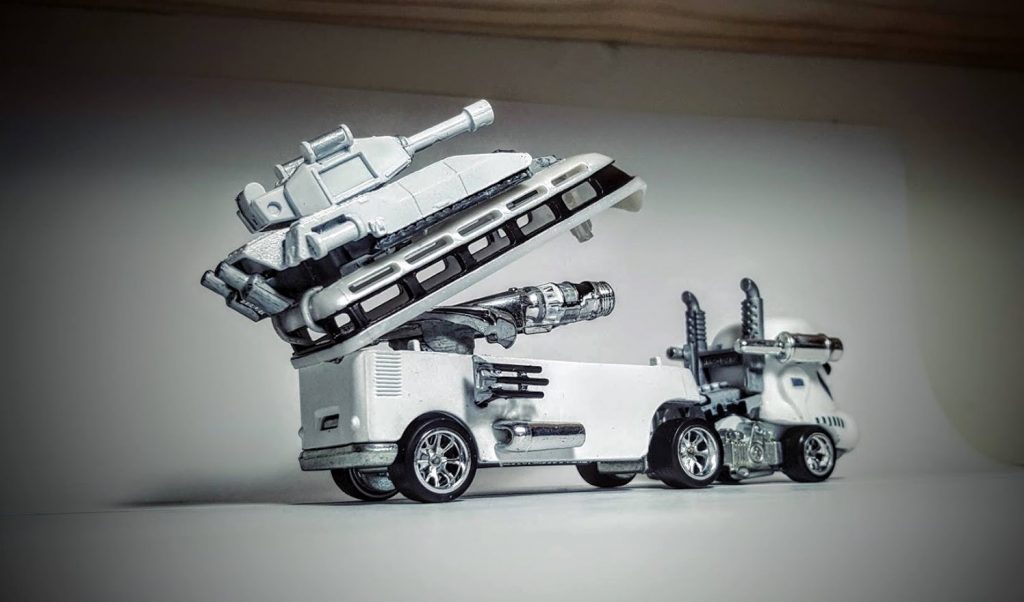 Unfortunately this is the best shot I have but truth be told it tells the majority of the story.

How To Create a Crude But Effective Hinge

Douglas Cheung has already shared with us how to properly hinge doors and bonnets in this post here where he created proper hinges that functioned incredibly well – and had I the patience or the time I might have gone down the same route for this build. But I don’t. Aaaaand I didn’t.

What I needed was a hinge that would stay in whatever position I placed it, and because I couldn’t be arsed to make a hinging mechanism AND a locking system that would stop it simply falling back down again (we’re not talking bonnets or doors here  – it’s a tank for pete’s sake!) I went with door no. 2

Door number 2 involved the use of clay modelling wire – an incredibly malleable and versatile aluminium wire (about 1.5mm thick) that I picked up from a local arts and craft store (Riot for those in Australia)
This wire is what I normally use to create frames or exhausts or just to help prop up and hold sections of customs after I’ve attacked them with a dremel. There’s a hundred other things I’m sure but my point is that this wire is a must have and I stongly recommend adding it to your inventory. 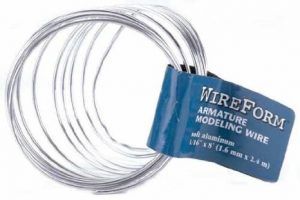 In the interest of actually being helpful I’ve Googled said product and found the following information:

‘The wire in question seems to be readily available from a number of brands and distributors and for my American friends I have taken the liberty of linking the image here to the Amazon product in question, an AMACO brand of modelling wire that will set you back a whole $7.75.’

Makeshift is hardly the right word because this is actually an incredibly effective way to hinge things because the strength and flexibility of the wire means you can literally hold the door/bonnet/hatchback/boot/neighbours dog…whatever it is you’ve decided to hinge in any position you like – which is a vital ingredient and necessity when taking photos of your custom work. It’s also a great way to make hinges because it’s a boatload easier :p

After I came up with a name!

I had considered calling it The Storm Haulin’ Dark Slider but the more I said it the more it just sounded well, gay… so I decided I like the shorter more eloquent version, that being ‘The Storm Hauler’…. and up until about 5 minutes ago that WAS the name of the creation…

The Volkswagen Hauler that turned to the dark side. And fishing. 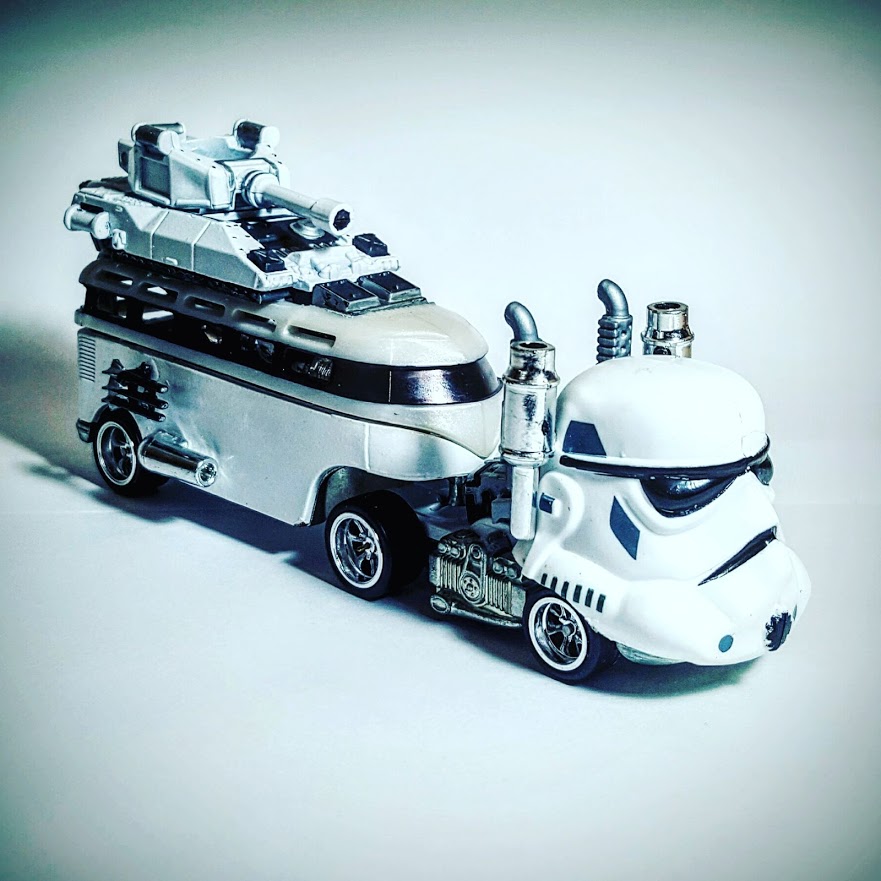 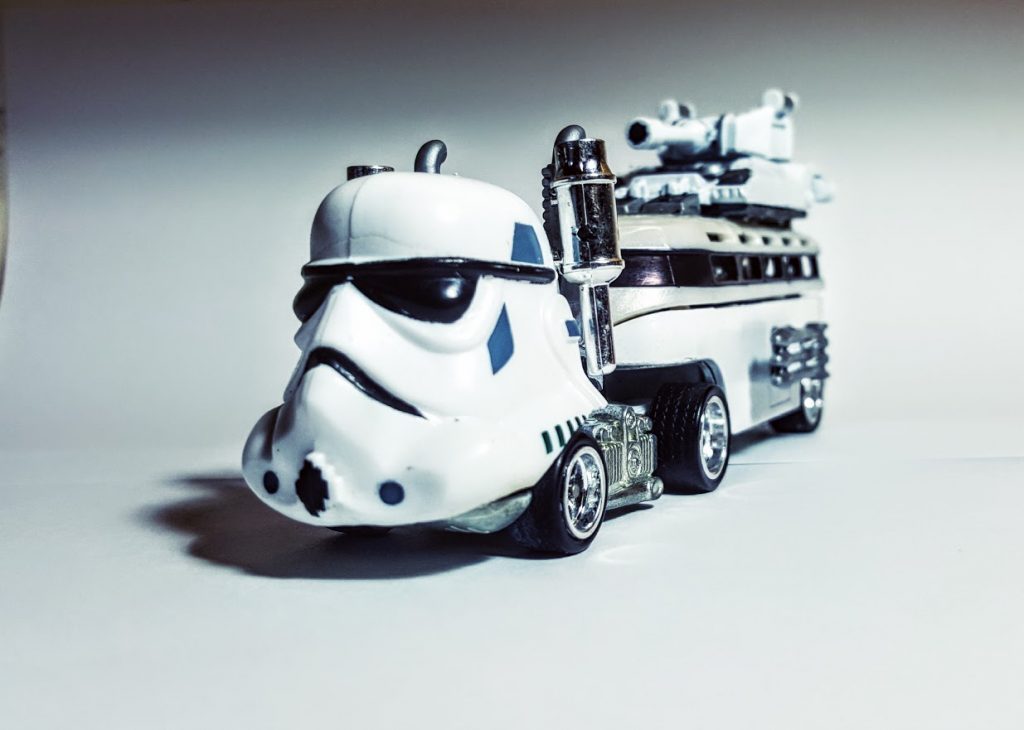 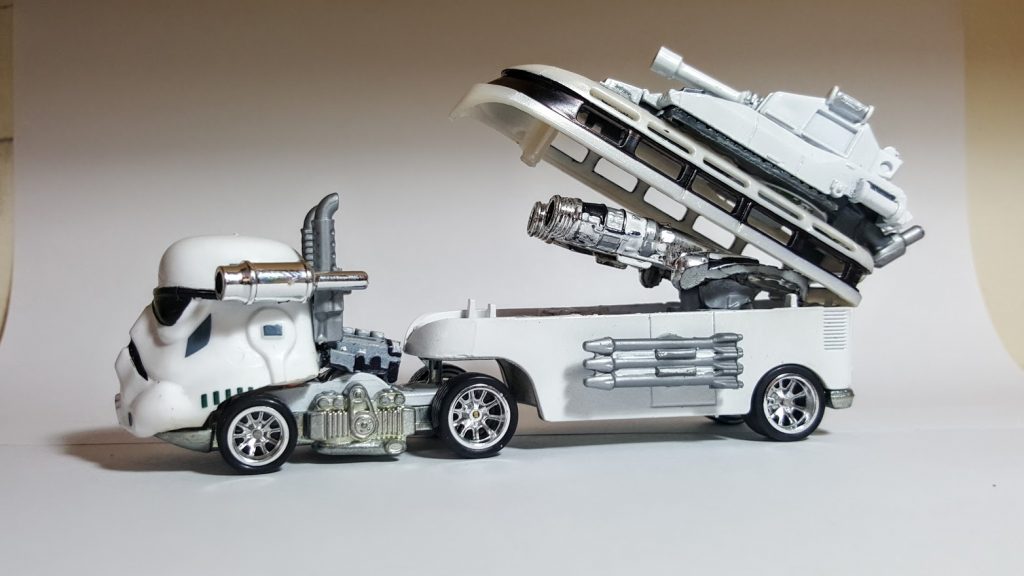 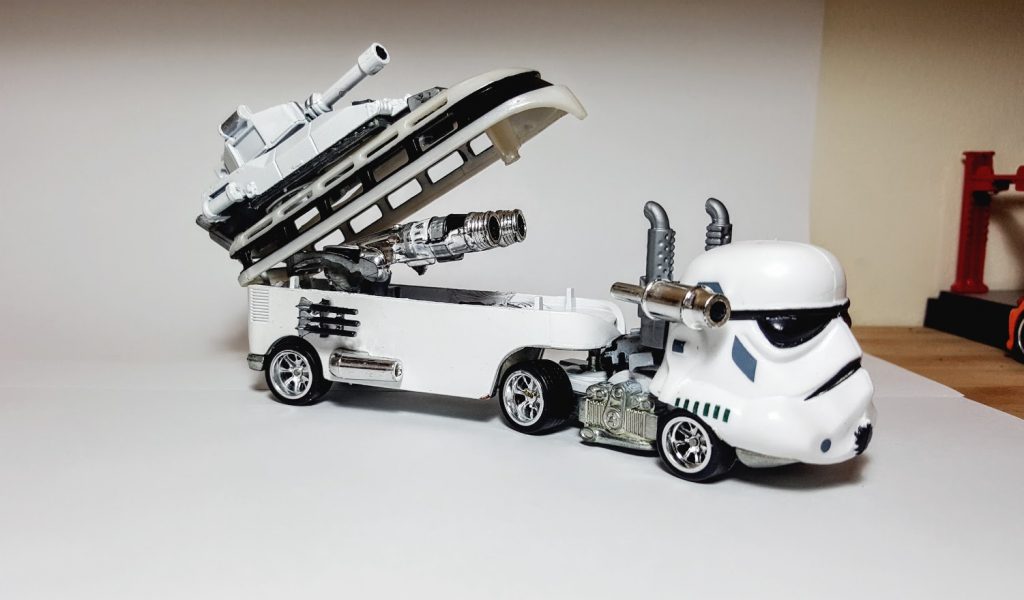 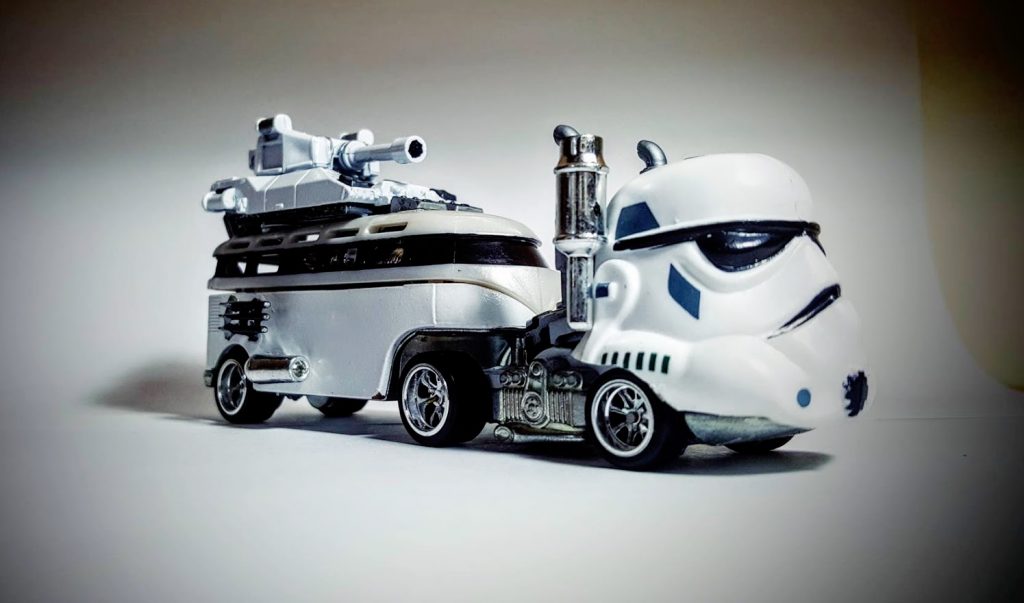 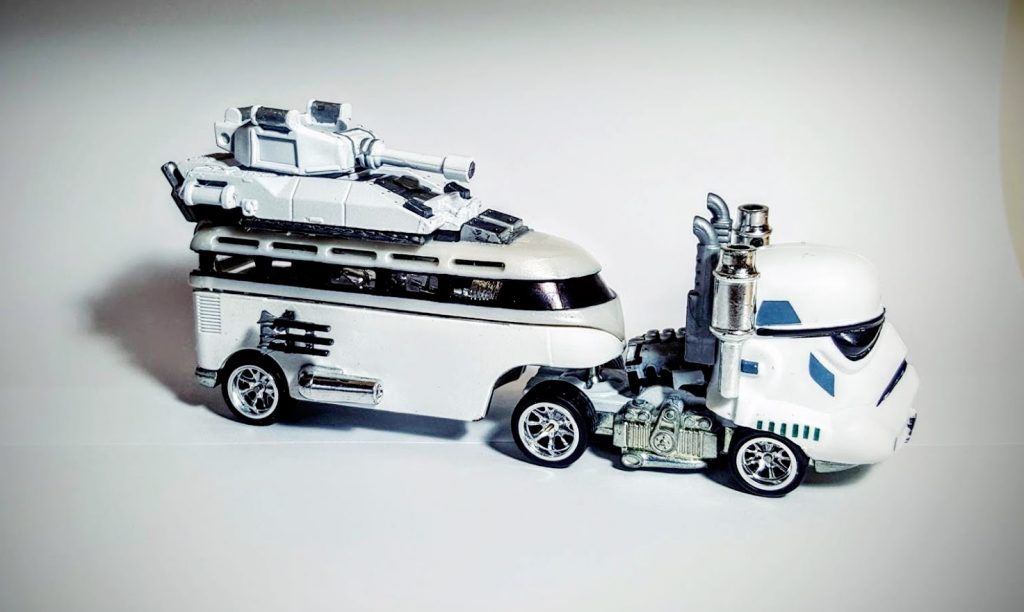 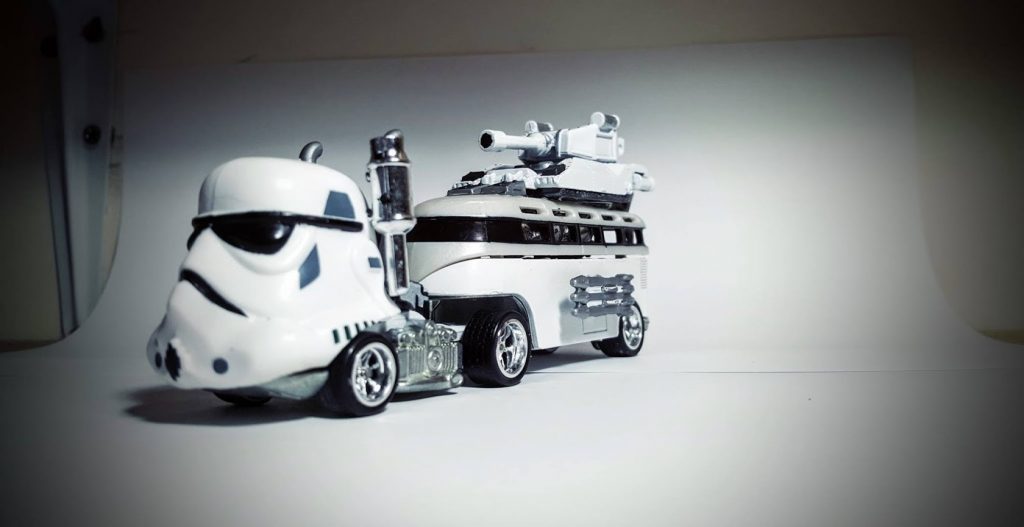 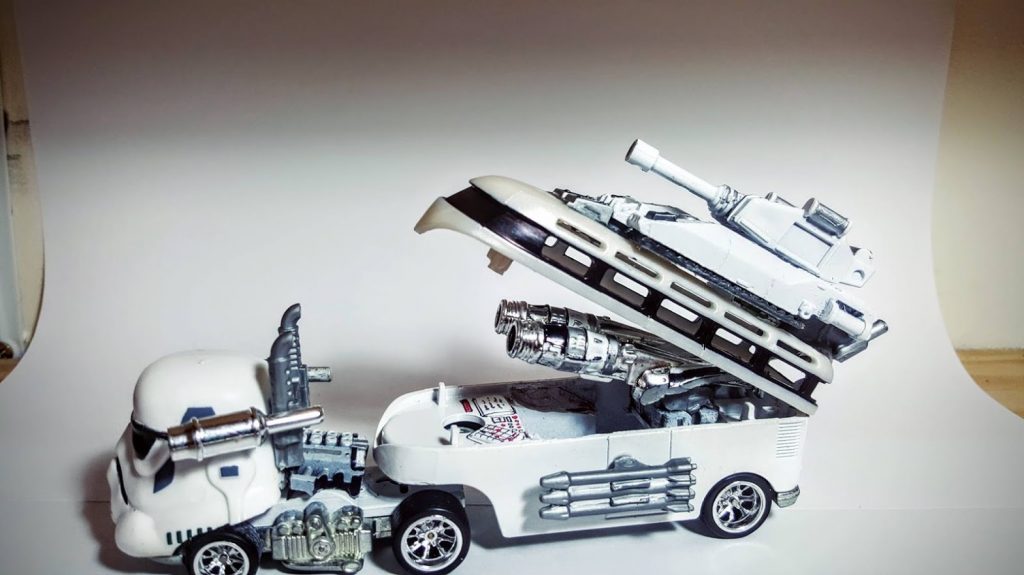 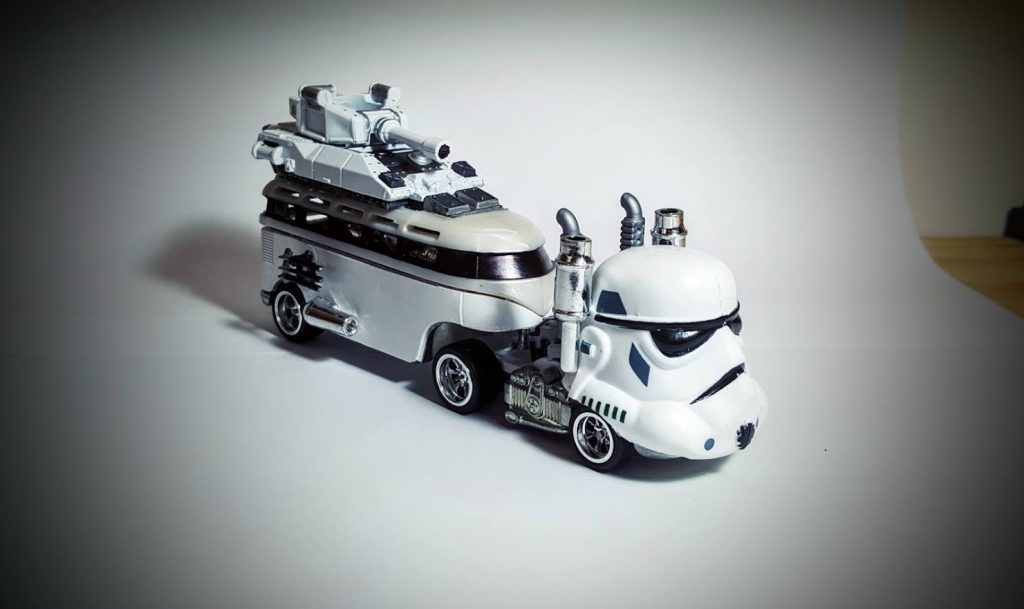 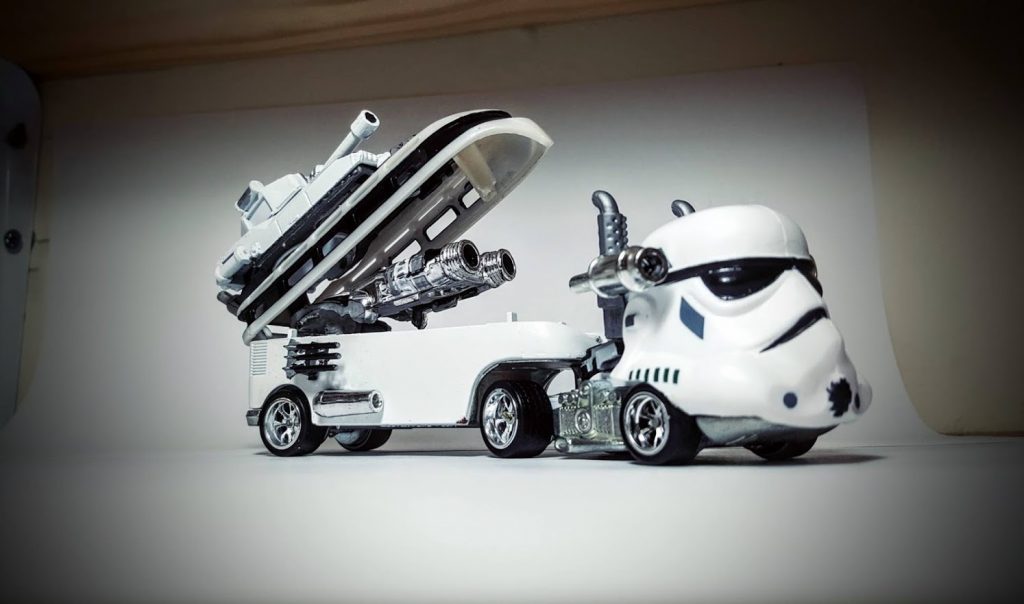 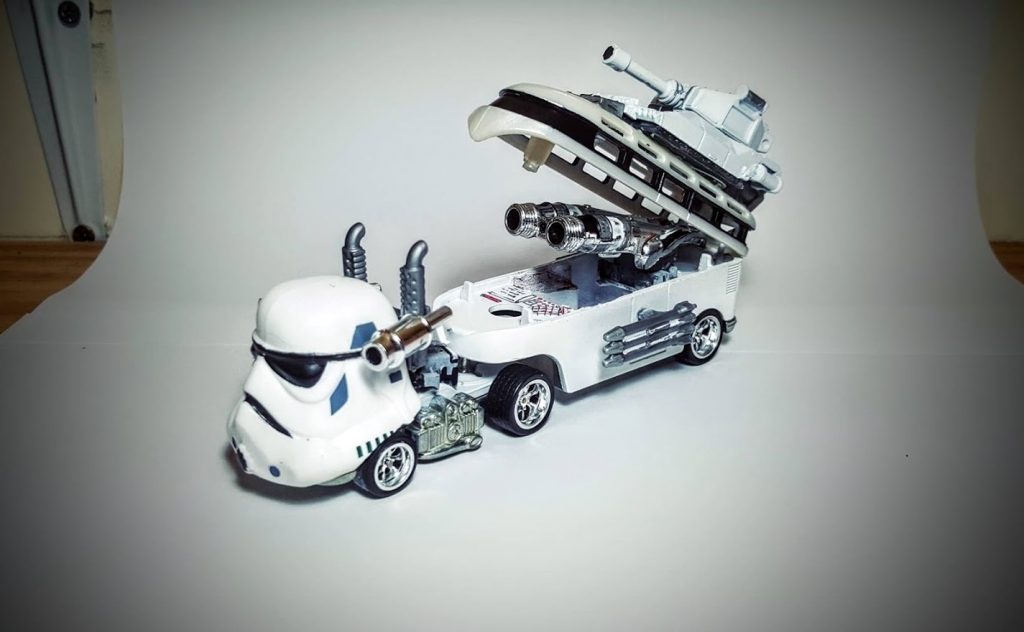 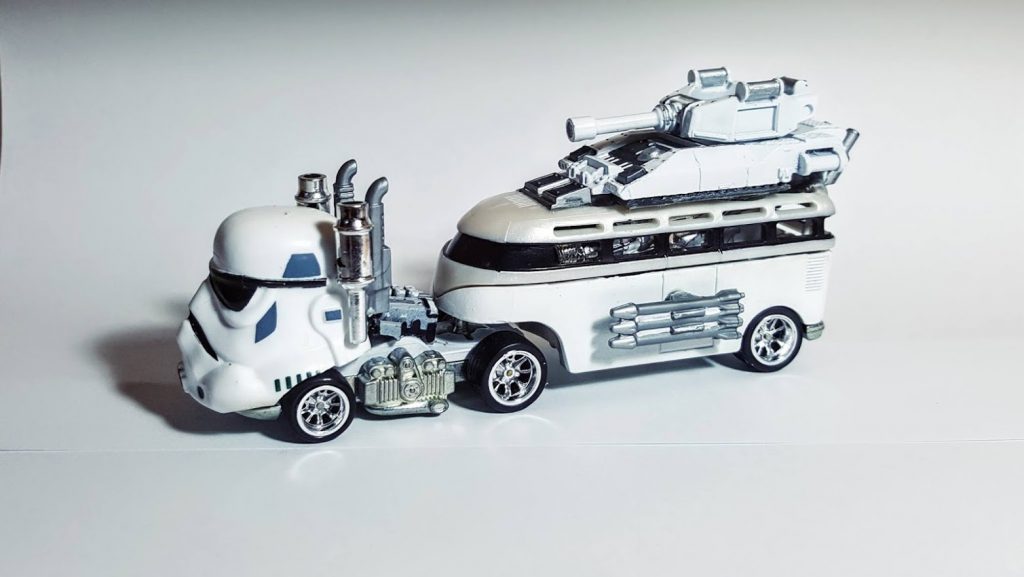